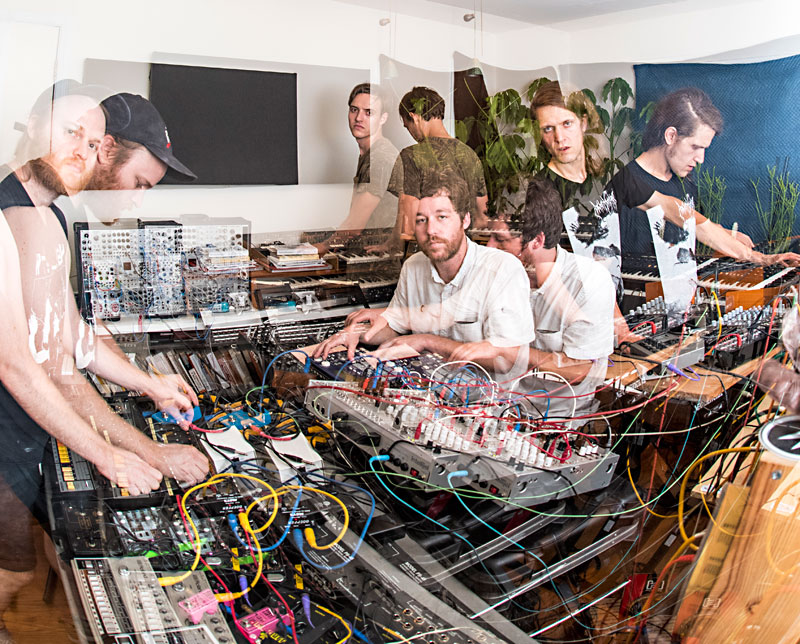 Few – if any – analog synth acts existed before Survive.

At least not in the guise of the Austinites' laptop-only-eschewing transcendence. Today, the capital city brims with retro synth bands, and doubtlessly a number of other continents do as well. Initially, however, the local quartet experienced difficulty aligning itself with like-minded acts since there were so few in 2008.

At the time of the Chronicle's recent cover story on the hardwired homegrown scene (revisit "Electricians," July 1), only those specifically interested in old-school analog electronics – behemoth machines decades removed from the new millennium – had any inkling of the activity teeming in Austin's subterranean scenes. Two weeks later, viral horror/science-fiction Netflix serial Stranger Things permanently altered the trajectory of Survive when two of its members charted on the Billboard 200 with the show's soundtrack.

An eight-year creative gambit decompressing a trail of singles, EPs, and compilation contributions had finally birthed an overnight success.

Though Kyle Dixon and Michael Stein produced the series' score, the show's creators employed the final track off the group's 2011 mixtape LT019 – nearly all the band's output bears a catalog number as its title – to pitch their creation to the streaming service. "Dirge" worked. Following up the pair's two volumes of Stranger Things (see "Texas Platters," Sept. 16), Survive drops a debut full-length for Philadelphia's pioneering extreme metal and ambient label Relapse Records on Sept. 30.

"There's definitely a lot more promotion for this than any of the other records," acknowledges Dixon. "Just dealing with Relapse, they tend to do more work on that end, and then, plus, we got the show."

"It's been a lot different of an experience," chimes in Stein. "It's also been a longer wait from delivery of the album to its release. Sometimes I'm like, 'You haven't heard it?' Then I remember, 'Oh, yeah. It's not out.' It's been sitting there a long time."

Could not have been randomly synchronized more perfectly, rather. Better still, the media and prospective fans seem to grasp that the pair of sound manipulators – and the swirl of sonics from the Stranger Things volumes – are part of a larger apparatus. Mark Donica completes the lineup, Survive's beginnings originating in Dallas when all four were still in junior high.

"People wanted to hear more music by us, and the only thing they could find is Survive," says Stein.

"There hasn't really been a distinct line between like, 'Oh, this is different than this,' so they're just like, 'Oh, it's more music,'" reasons Dixon.

Such understanding will be critical to the band's success on the road. That demographic following the story's development online has a clue, but those things have a funny way of changing when alcohol's involved and a live audience demands your band kick out the jams. How will Dixon and Stein satisfy fickle fans, while not subverting and maintaining the identity of Survive?

"It's been a topic of conversation," acknowledges Dixon. "It's primarily going to be Survive stuff, but we may throw in a couple things from Stranger Things just to try to keep people happy. You don't want to sell out a room and then have everybody pissed when they didn't hear the Stranger Things stuff."

"We're getting together as a band to start practicing and see how we can approach those songs," posits Stein. "If we like it, if it clicks and feels good, we'll play it. We'll just have to make it 'Survive.'"

In another bit of great fortune, one falling in line with our own four-and-a-half-star review for last year's reissue HD015LP/540-046/LLR010 ("Texas Platters," Feb. 20, 2015), the new Relapse album is a magnificent piece of work. Loosely tying the band to the Eighties horror aspects of Stranger Things – Giorgio Moroder, John Carpenter – it pushes Survive forward as a collective making beat-driven music, sumptuous melodies and percussion at once optimistic and threatening. RR7349/HD037 is the sound of Reagan-era deception, all smiles in the face of hawkish avarice.

A metallic bounce keeps it from careening into orbit.

"We consciously wanted to put more songs with beats, and somewhat of a pop structure, whereas the older stuff would have more texture, interludes, or segues and things," explains Dixon.

"There's more of a luxury, or maybe it's less cosmic, almost," opines Stein. "It's less cavernous. It's really direct with its arrangement and writing. Everything's right in front of you."

Mention is made by the pair's inquisitor of its synergy with long, nighttime drives.

"That's a great place for it," agrees Stein.

"Makes sense more so than at the beach," jokes Dixon. "It's not like we say, 'Oh, this is nighttime music,' but sometimes we make something, and it's like, 'This is a fucking nighttime song.'"

"Very early on, consciously, we were like, 'You know, that music is like driving at night,'" continues Stein. "Some tracks reminded us of that before it became a whole thing – a trend. Might not be in a Lamborghini or a Ferrari, but I know you're driving to our music."

"If I saw somebody 'swanging and banging,' listening to Survive," quips Dixon, "I'd be like, 'Mission complete.'"

A version of this article appeared in print on September 23, 2016 with the headline: Stranger Things