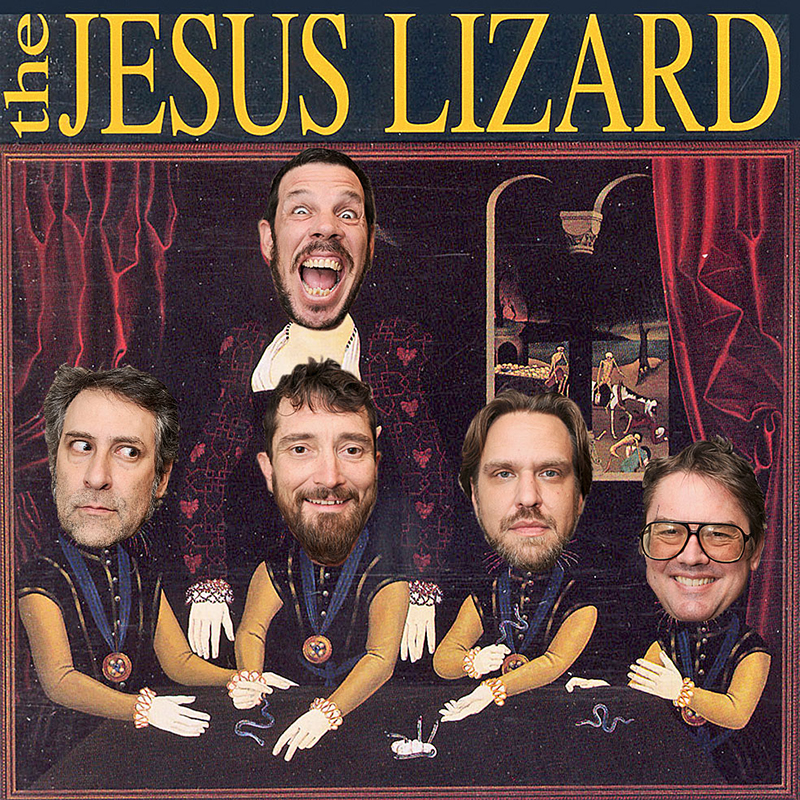 The official rock & roll handbook states: "A famous frontman should never sing in a local tribute act based on his band's music." So what the hell is Jesus Lizard singer David Yow doing fronting the Jazzus Lizard, an Austin quintet that does jazz appropriations of the noise rockers' catalog?

Like so many brilliant ideas, this one began when someone said, "Wouldn't it be cool if ... ?" It was Lost Well owner Marcello Murphy, talking to Jazzus Lizard keyboardist Ezra Reynolds, who floated the long-shot idea. Murphy emailed Yow: "Longtime listener, first time caller."

"He asked me if I would be into the idea, and really I wasn't," laughs Yow over the phone from Los Angeles. "Then I thought about it all day, talked to Ezra, and realized it would be a goofy, fun thing to do. So I wrote back and said yes."

Yow, a maniacal performer who came up locally with Scratch Acid before becoming one of the Nineties' most notorious frontmen, commonly puts himself in unfamiliar situations. In 2013, he heroically channeled Gary Floyd at a Dicks benefit. Two years later, he was enlisted to sing with Flipper for a pair of reunion dates. Now, in a move stranger than Axl Rose subbing into AC/DC, he'll reimagine his own songs as jazz numbers.

"I like being challenged," he confirms. "These days I'm much more concerned with acting than I am with music. Part of what I like about acting is that it's such a challenge. You have to work at it."

Saturday's show seals a circle for the Jazzus Lizard.

"When we started the band, we just did it for fun," says saxophonist Tom Kimzey, who founded the group last decade with fellow Red River workhorses Reynolds, bassist Adam Kahan, and drummer Snoopy Melvin. "We never expected to put out two CDs, play South by Southwest, and, eventually, perform with David Yow."

Yow and his new Lizard pals plan to practice their asses off between Thursday and Saturday, configuring vocals into the group's wild instrumental rapport.

"There are certain songs with distinctive vocal melodies I try to preserve," Kimzey acknowledges. "But then we also like to improvise and go off the rails."

"I had to go back and listen to the songs this morning to see if I remembered the words, and I think I know almost of all them," chuckles Yow. "I think I'll pull it off." 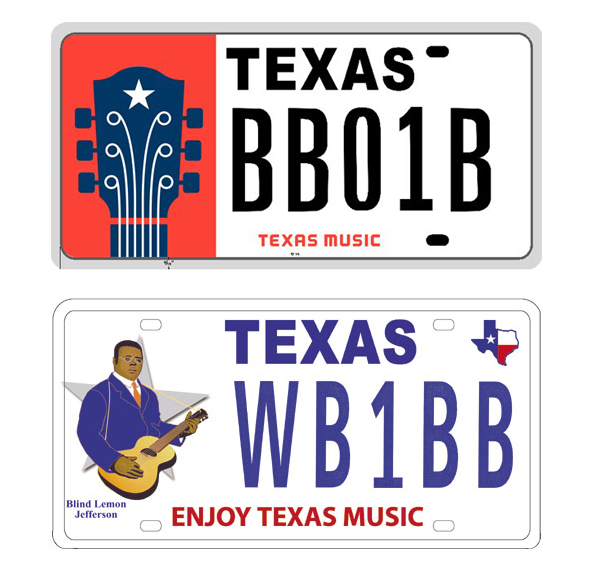 Last month, the Texas Music Office began trumpeting its Texas Music License Plate Grant Program. If you purchase a license plate – decorated with a guitar headstock design – $22 of the $30 will be applied to grants that help underserved students get instruments and music lessons.

While the press release touts the "launch" of a program providing "new opportunities for young Texans," the concept is by no means novel. In fact, it's a recycled idea, and no one's given credit to its originator. Casey Monahan, who ran the TMO from its 1990 inception until last year when he was ousted by Greg Abbott and replaced by friend of the administration Brendon Anthony, cooked up the license plate program in 2003.

The only nuance between the recently suspended original program and current plate initiative, other than grants now being accessible to 501(c)(3) charities, is the design. They've replaced the image of Texas blues patriarch Blind Lemon Jefferson with boring clip art.

"You honestly don't think that, from 2003 to 2017, Blind Lemon had a pretty good run?" shot back Anthony when asked why he'd taken Jefferson off the plate. "Originally the idea was for them to re-brand that every couple years."

Anthony says there's been an uptick of plate purchases in the last month as a result of the marketing push and characterizes his campaign as expanding and re-launching a long-dormant program. Any government initiative that brings music to underserved kids is tops by "Playback," but portraying an existing program as a new idea doesn't count as an accomplishment. According to public records, Anthony's taxpayer-funded starting salary is $126,690, compared to Monahan's $77,000 after 25 years, and we've seen little action from TMO in the year and a half since the changing of the guard.

When asked what else he's working on, Anthony declined immediate comment. When reached about the situation, Monahan offered, "I'm happy my successor at the Texas Music Office chose to continue the program I launched 13 years ago."

Saturday at midnight, a line spewed outside Beerland. Some in the queue, attracted by the promise of a "special guest" headliner, had no clue what awaited them. Others had their phones blowing up with urgent texts: "Cherubs are playing Beerland!"

Austin's noise rock misfits, 22 years removed from their last show, knocked the rust off with a sledgehammer. Opening with a bone-shaking "Donkey Suite" off 2016 EP Fist in the Air (revisit "Texas Platters," April 8), the trio maintained a 75-minute hail of corrosive distortion, punishing rhythms, and testes-gripping vocals that's been the band's proprietary concoction since 1992.

"It took long enough to get back onstage," singer/guitarist Kevin Whitley smiled wryly. "Richard made us do this. We didn't want to," he added, referring to Super Secret Records honcho Richard Lynn who organized the Austin Jukebox concert.

Another label boss, Butthole Surfers' beatsman King Coffey – who issued the Cherubs first three albums, 1992's Icing, 1994's Heroin Man, and 1996's Short of Popular on his now-defunct Trance Syndicate label – was one of the 200 grinning faces in attendance.

"Cherubs is ugly noise music and, as an adult, it kinda doesn't make sense to do that," Whitley told "Playback" in 2014. He was wrong. The fiftysomething business professional, who hasn't played in an active band for two decades, owned Beerland's stage, which was covered in Mexican candy after drummer Brent Prager massacred an ugly elf piñata just before igniting a highlight rendition of "Cumulo Nimbus."

Like 2 Ynfynyty, the 2015 comeback LP that track was pulled from (reference "Texas Platters," April 3, 2015), Saturday's surprise show sets the stage for the band's appearances at Mohawk's 10th anniversary in September, and Sound on Sound Fest in November.

Preston Hubbard, the hard-living, hard-playing blues bassist who experienced the highs and lows of his captivating career during the two decades he lived in Austin, died last Wednesday in St. Louis at 63.

Born in Providence, R.I., Hubbard earned his stripes as one half of the rhythm section for Grammy-nominated revivalists Roomful of Blues before defecting to Texas to replace Keith Ferguson in the Fabulous Thunderbirds in 1984. The "Guero Loco," known as "Pinky" to friends, remained a staple of the band through 1994, meanwhile playing on the Vaughan Brothers' Family Style and Bonnie Raitt's Nick of Time. After leaving the T-Birds, he tracked bass on Ministry's Filth Pig and played with local comrades Lou Ann Barton and Nick Curran.

At that time, his long-developing heroin addiction blossomed into crack smoking and selling $20 foils of pure tar heroin. In the late Nineties, his mother placed an ad in the Chronicle pleading for information of her son's whereabouts. Turns out he was in prison near Abilene after his third local bust.

When he got free in 2000, Hubbard penned an epic autobiographical feature for the Chronicle detailing his time in prison and his "heroin-shooting, cocaine-smoking, hard-core junkie" lifestyle (re-read "Jailbird," Oct. 20, 2000). Not long thereafter, he relocated to St. Louis where he remained active in blues bands. He was found dead at his home last Wednesday.

The cause of death hasn't been made public, but he was hospitalized in 2014 with critical blood sugar levels and diabetes. Antone's marquee honored him that night: "Rest in Peace Preston Hubbard." 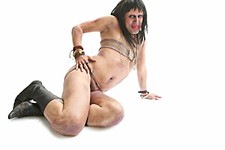 Playback: A Plethora of Pride
Gay Pride, Asleep at Wheel 'Then and Now,' and David Yow confirms he's a Dick 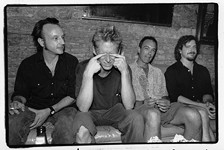 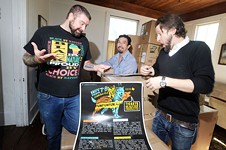 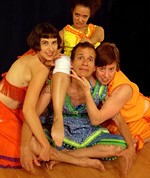