Retrofitted in Ray-Ban aviators, blazers, and turtlenecks, Gloves INTL could have swaggered straight out of an Eighties noir on their eponymous sophomore disc. Curators of "future funk," the Austin quartet coalesces hot pink rhythms and Champagne-kissed R&B with an ultra-polished pop veneer. Before boldly going where few locals have ventured with such self-assurance, guitarists Ajit D'Brass and Colton May rooted themselves in psychedelic post-punk with the Act Rights. The duo's wheelbarrow riffs and distorted power chords linger on Gloves' fearless 2015 debut, Get It Together, its hallucinatory trumpet swirls ("Running Water"), reverb smudges ("Autobus"), and a disorienting juggernaut ("Winter Storm Cleon") rife with nonconformity and a childlike curiosity driven by drummer Salem Abukhalil and bassist Ben Fisseler. They dubbed it "anti-garage." On Gloves INTL, the foursome's trimmed off the Living Colour-like jam bombast in favor of glistening melodies accompanied by minimalistic production. The guitar work on Get It Together, marked by spastic jolts and erratic play in "Accra" and "Coffy," now filters more purposefully. Vamped chord flourishes and a crisp twang shade the funk foreground on "Predictable" and "Felicia Summers," while "D.Y.T." and the coy "Mister Bad" practice tasteful restraint with a Prince-like modality thanks to producers Evan Kleinecke (Diplo, Tyga) and Brad Bell (Spoon). Exploratory basslines ("Glitter & Diamonds") accentuated by thumped, in-the-pocket percussion ("The End," "We Bump") recall Parliament-Funkadelic and Sly & the Family Stone, but also nod to hip-hop ("We Bump"). In tracking this disc, the band posted a sign in the studio that read "This is not a rock record." In succeeding, Gloves INTL proves so much more. 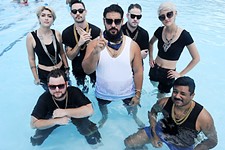