On Austin: "It doesn't suck at all" 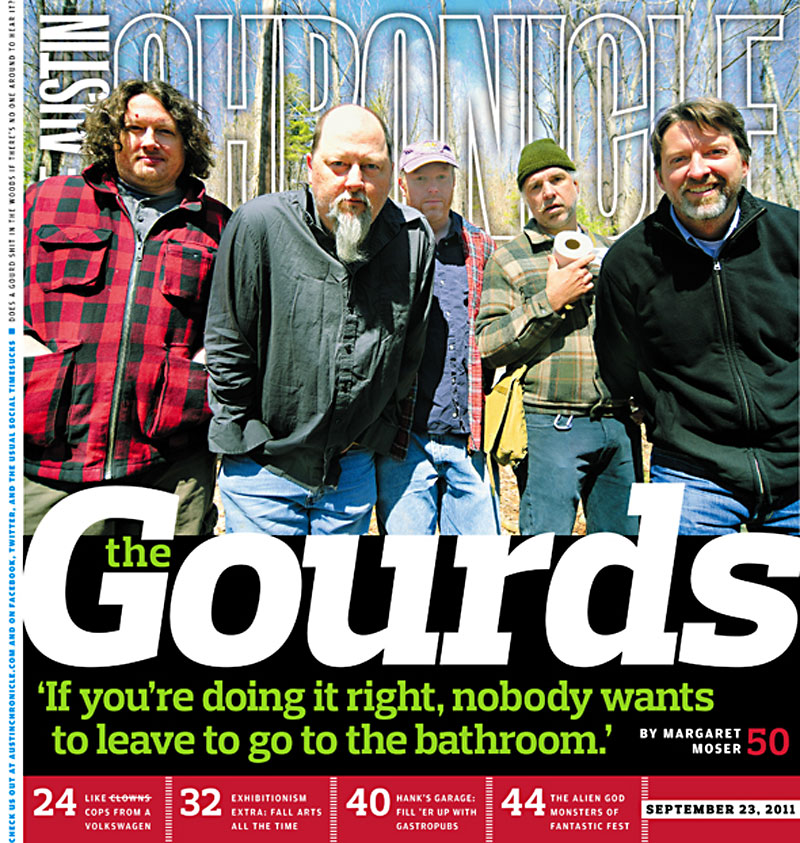 Always prepared: Jimmy Smith, second from right, on the cover in 2011 (Photo by John Anderson)

Straight up, do you think the Gourds will ever play again?

"No," says Jimmy Smith, letting out a jackhammer laugh as he stares pensively into the darkness. "I look at it like something that's in the rearview mirror."

It's an apt metaphor considering we're sitting in the front seat of a Ford 350 cargo van parked outside of his Central Austin home, which is empty and smelling of fresh paint. Midnight nears as the bassist/songwriter of the local late-Nineties roots breakouts is lubricated just enough to agree to an unsolicited late-night interview. This week Smith exits the city he's called home for 25 years and moves to Missoula, Montana.

How bad does Austin suck now that you're moving to Montana?

"It doesn't suck at all," shoots back Smith. "Austin is a brilliant place and it always will be! A lot of interesting people keep coming here, and it's a great place to find your mate and do a lot of beautiful things. When the people who've done all those things get older, they need to step aside maybe and let the rest of it play itself out."

The 47-year-old Plano native, whose possessed stage presence has been often compared to the Band's soulful spark plug Rick Danko, set his compass for the Big Sky State for two reasons: First, he wants his three young "boyos" to have a spacious upbringing, and number two, it was the Gourds' best touring market.

"I'm gonna go up there and play my ass off," he howls, slapping the steering wheel in excitement. These days, Smith performs as a one-man rock & roll rhythm machine called the Jimmy Smith System. "The System is cool. It abides. You got the kick drum, the snare, and the bass. There's no wasted motion. I'll never stop playing music. I'm a lifer."

Smith's final Austin show happened three weeks back at Hole in the Wall with Mike Nicolai. He estimates 20 people were in attendance.

"It was a good show," he shrugs. "But the interest wasn't there."

The same could be said about most of the singer's post-Gourds output. His unbridled songwriting and heartbeat grooves have gone underappreciated since his flagship outfit disbanded in 2013. The Hard Pans, his hard-rockin', free-ballin' collaboration with keyman Claude Bernard and guitarist Mark Creaney, garnered a modest reception and short life span. Meanwhile, Gourds co-frontman Kevin Russell became a major draw, locally and nationally, as swamp-funk maestro Shinyribs.

Are you butthurt that Shinyribs blew up while your music has gone overlooked?

"Hell no, not at all. He took his own show into a different scene and he tricked the system! That's cool," says Smith. "You can't be butthurt about someone being successful."

Smith remains proud, reverent, and grateful for the Gourds, and regrets that Russell pulled the plug on the alt.country misfits. When confronted with how Russell characterized their relationship in a 2015 Chronicle feature ("We were at war"), Smith winces.

"We weren't at war. We were a band. We were a good band and that's why it breaks my heart. The Gourds were weird and always will be, but we did our best."

What will you miss most about Austin?

"I'll miss my home. That's it," says Smith, gazing from the driver's side window at what will soon become a rental property. "I love Austin, and I'll always be protective of it because it always protected me and let me be who I am. It meant so much to be a rock & roller here. I was all in." 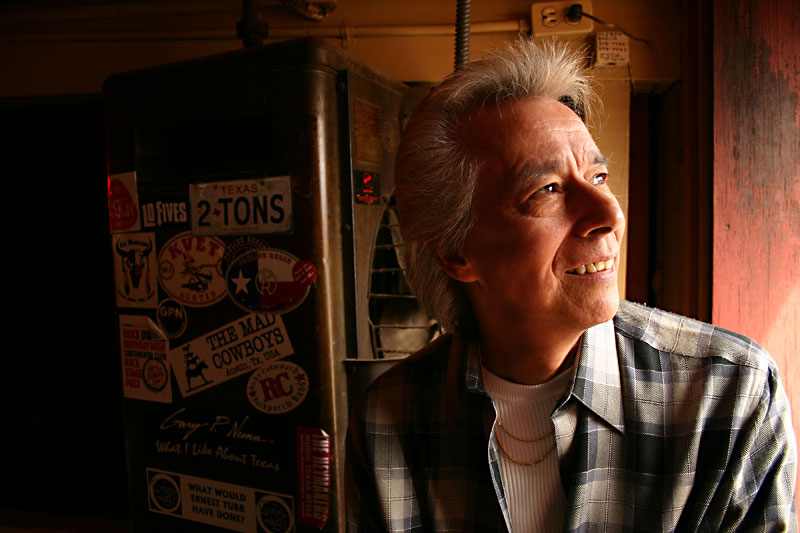 Country guitar ace Pete Mitchell, best known as the right-hand man for Texas Troubadour Ernest Tubb, played his outro on Saturday night at the age of 74 after a five-year spell fighting off colorectal cancer.

A native of Blind River, Ontario, the guitarist – real name Peter Michaud – launched his career in Toronto's rock & roll scene before immigrating to the U.S. in 1964. In North Texas, he contributed graceful country leads to Ray Price, Cal Smith, Ray Chaney, and Waylon Jennings. Touring the Lone Star State together, Mitchell let Jennings play his leather-covered Telecaster, a look the latter soon adopted and made iconic. In 1974, Mitchell was hired into Tubb's band and served as the group's instrumental cornerstone 'til the end of the line in 1982.

In 1999, Mitchell relocated to Buda after falling for his wife Paula. He was content here in the "velvet rut," telling the Chronicle he'd rather take a $100 gig in Austin than drive to Dallas for a $250 gig. He remained active, releasing a solo album in 2000 and playing guitar for Alvin Crow, James Hand, Lucky Tomblin, Glen Collins, and the Troubadillos.

"Pete was the Jimi Hendrix of country music," lauded Crow on Tuesday. "He was innovative and did stuff no one else could or would do, but I look up to him more for the way he faced down cancer with so much braveness and positivity."

Mitchell's last gig was the week of Christmas at Watterson Hall with Collins. Thereafter, his health worsened as the cancer spread to his spine. On Saturday, he left the hospital and died five minutes before midnight. Friends and fans are welcome to his funeral: Fri., July 29, 1:30pm, at Buda's First Baptist Church.


For the Benefit of Izzy Cox

Izzy Cox's tortured singing – appeals from the electric chair and bruised-up love songs – can coax a tear from marble eyes. The voodoobilly chanteuse with a glittery Gretch guitar and cabaret-style vocals has long demonstrated a talent for translating palatable emotional pain into her murder ballads, but now she's under a different kind of knife. Earlier this month, Cox was diagnosed with stage two pancreatic cancer, a disease with a notoriously slim survival rate. The local singer, known for her workhorse concert schedule, has already undergone two surgeries and begun chemotherapy.

Musicians come together at Spider House Ballroom this weekend, fundraising to cover Cox's living expenses while she's out of work. The two-night benefit commences Friday (7pm-2am) for a 10-act bill including Stevie Tombstone, Rock Bottom String Band, and Flametrick Subs. Saturday (9pm-2am) rolls on with the Hickoids, Hormones, and Black Irish Texas. It's unclear if Cox will be in attendance, but if not someone should sing her triumphant dirge: "Death's knocking on my door! Tell him I don't live here anymore!"

And you thought you had a shitty weekend! While gigging in the Canary Islands on Saturday, Carolyn Wonderland's band fell victim to backstage thieves who made off with phones, credit cards, passports, and all their tour money. The next night, fellow Austin musician Suzanna Choffel's chateau in northwestern France went up in flames. Though the fire damaged her room, Choffel was outside enjoying red wine and crepes.

South by Southwest booked onetime political prisoner Nadya Tolokonnikova of Russian activist band Pussy Riot for a speaking engagement at the 2017 Music Conference. This year, SXSW registrants get secondary access to events outside their badge type, part of an overall effort to integrate the conference's Music, Film, and Interactive platforms.

Jeff Bridges commandeered Dale Watson's guitar and band for a sloppy 15-minute set at the Continental Club Monday night that included Crazy Heart gem "Fallin' & Flyin'." The Dude was in town for the premiere of his new film Hell or High Water.

A version of this article appeared in print on July 29, 2016 with the headline: Playback – Exit Interview: Jimmy Smith
More Playback columns 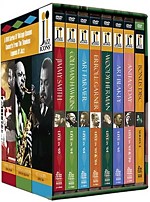