Jack Ingram sat poised to make the leap into mainstream success after capturing the prestigious Academy of Country Music Award for "Best New Male Vocalist" in 2008, followed up the next year by Big Dreams & High Hopes. Then momentum waned. What's remarkable about Midnight Motel, the Houston native's eighth studio LP and first in seven years, isn't only some of his best songwriting, but a stripped-down, casual recording that feels like a late-night ramble complete with between-song banter and stories. It's a bold reset, one perfectly tuned to the raw emotional impact of these road ballads. Opening trifecta "Old Motel," "It's Always Gonna Rain," and "I Feel Like Drinking Tonight" turns the Austinite's lyrical brilliance over easy acoustic melodies, while "Blaine's Ferris Wheel" unwinds a Texas tall tale worthy of Guy Clark. The aphoristic "Nothing to Fix" and "What's a Boy to Do" act as polished lead-ins to the equally laconic back half of the album, both still mostly subdued and a far cry from Ingram's trademark "Barefoot and Crazy" Texas country anthems. Throughout, his voice settles in warm, familiar, aged. "Trying" likewise roils slow-burning maturity, while "I'm Drinking Through It" bites bitter, and "All Over Again" sweetly lulls into the closing acoustic reprise of "Old Motel." Like Hayes Carll and Pat Green's latest efforts, Ingram realizes more power in pulling back, suggesting Texas songwriting taking a welcome turn toward a more lyrical and emotional focus. 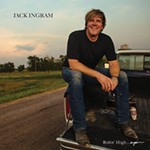