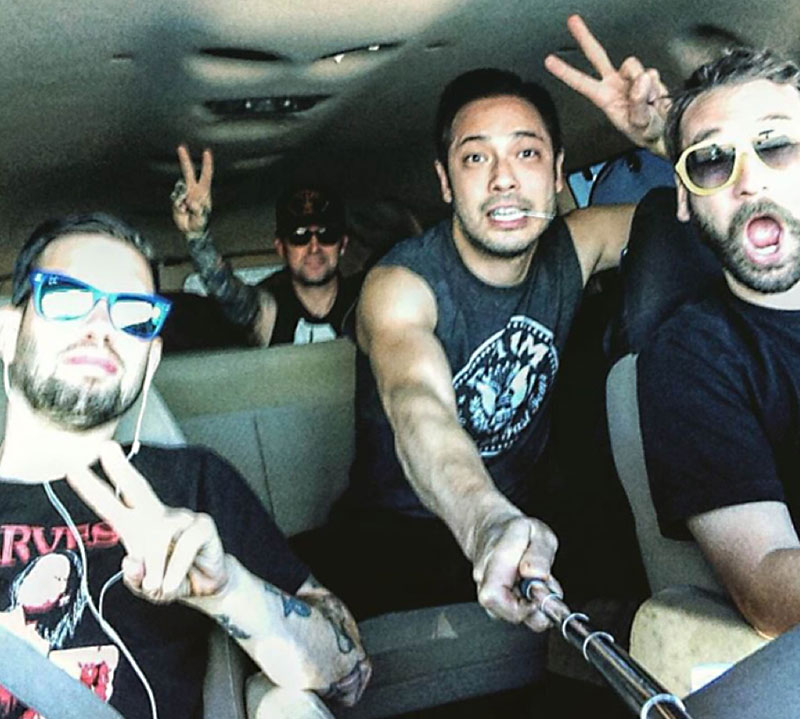 Whenever you're touring Europe, they have these little military-style barracks for you to stay in. There'll just be this roomful of mattresses or bunk beds. We played a show in Belgium our first time in Europe and were so good that everybody in the crowd got laid that night. Even the door guy got laid, which is the least-likely-to-get-laid job in music.

And I know he got laid, because he did it in the room our band was staying!

It was the second-to-last show of the tour. We played there, and we had to get up really early and drive 12 hours to somewhere for a show. Then we had to immediately drive eight hours straight to the airport. I knew we weren't going to get any sleep for 48 hours, then get on a plane for nine hours. So, sleep was really important to me.

So we're in there, and there'd been this sketchy, long-haired door dude. He was nice enough, offered us this blue cocaine at one point ("I think that's pool chlorine"), but everyone in the band was on the same page: "Let's just get some sleep. The next 48 hours are gonna be gnarly." We were all in bed, and I hear this rustling at the door. It opens and there's the door guy with a girl, and they're making out. It's kinda like Sea of Love, where Al Pacino and Ellen Barkin are making out really passionately, slamming each other around standing up. But it's the sad, drunken version of that. You can see through the silhouette where there's tongues missing each other's mouths.

So, they're rolling around, groping, haphazardly trying to find a place to get to it. They pick the bed right next to me. They're making all kinds of weird, unholy slurping sounds straight out of H.P. Lovecraft. I'm lying there, thinking, "Mike, this is Europe. This is like all those Emmanuelle movies. You've gotta let this happen." But I can't sleep, and the noises are getting gnarlier, and I'm getting more anxious but feeling like a square for not accepting this.

Finally, I've had enough. I went and woke up our tour manager, 'cuz I knew the door guy didn't speak English. I went over with him, didn't hide as he was explaining things to them. I stood behind him shrugging.

They both get up, buck naked. They don't care. The dude is all hairy, and it looks like he has melted ectoplasm all over him, matted over his crotch and his thighs. She's getting it together, apologizing in heavily accented English. They have some quick exchange in some heathen language. The guy is pissed, screaming, "The fuck?!" She understands, he doesn't, and he starts screaming, "Fuck you, and fuck her, and fuck everyone here!!"

I was just like, "Okay, I can give him some anger time, because I ruined his good time."

Then he was like, "Fuck you, and fuck your Texas!!!" And I didn't realize until that moment how patriotic I am: "Oh, yeah?! If it weren't for Texas, you'd still be speaking German!!" Which is not true, and not how that war worked at all, but I don't think he was a history buff.

So, we're screaming "fuck you" at each other and it's the most awkward place to fight, between these rows of bunk beds, but our tour manager gets between us. Eventually they go into the kitchen, the door guy wasted on pool chlorine cocaine, and they're screaming at each other in French. Finally, the dude leaves, but he comes back every hour and menacingly pounds on the door. I didn't get any sleep at all. Every noise I heard, I thought it was some dirty Belgian door guy coming to stab me.

Meanwhile, the band's just oblivious to all of this! The next morning, someone wakes up and says, "Oh, did something happen last night?"