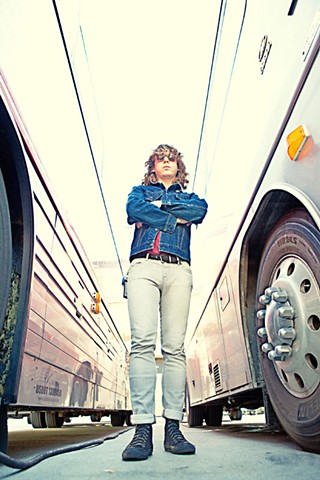 The year was 2002 or 2003. My solo debut, Sha Sha, had been out for a while. I was traveling the world, playing my first huge, sold-out shows, and having a blast.

When you play music for a living, you start out in a van. You drive from city to city all sleep deprived, barely making it to the next gig. If you're lucky, a beautiful moment comes when you move up a notch to a full-blown, fancy as hell tour bus. That beautiful moment had just happened to me thanks to the Strokes inviting me on their U.S. tour. The routing was such that cities were too far apart to do in a van.

One thing they don't tell you about your first bus is that it comes with your first bus driver. Billy was such a nice guy. So damn nice and country that I took him right in and made him my new best friend. I mean, yeah, I was definitely high on the fact that I'd just been upgraded to a real-deal bus, and yeah, my new album was selling shit-tons of copies and yeah, I was green as puke and trusted everybody I met, but Billy was my man!!!

He was a professional because he'd once driven the Oak Ridge Boys' crew bus, so we put him in charge of the money. Like, all the money, $10,000. The money for each gig, merch money, the money we used for hotels, food, fuel, tolls, tips, you name it.

The first few days were awesome! Singing songs, telling jokes, Billy singing too, playing video games (when not driving). He'd come into the venues with us and collect the money – put it right in the money bag. And we were crushing it live! At a new festival called Coachella, I hung with Beck side stage and we watched the Libertines.

Dinnertime came and I headed back to the artist area. As I neared our bus, I see my man Billy walking toward me with a sad look. First time in our two-week friendship he wasn't smiling. I said, "Hey Billy! What's up?"

I stood there blank. No one had ever stolen anything from me before. And I never held $10,000 cash before, so I couldn't really comprehend the amount, but it sounded like a lot.

Billy begged me not to be upset and promised that he would pay me back, but the next day he was gone.