Calling all vinyl nerds, audiophiles, hipsters, hoarders, wheelers, dealers, and phonographic fetishists. The USA's largest sale of recorded music, featuring hundreds of vendors stocked with over a million LPs, 45s, 78s, CDs, and cassettes, takes over the Palmer Events Center this weekend. You could call it the South by Southwest of record swaps, or simply by its name of the last 35 years.

"This looks like it will be our biggest show ever," estimates Nathan Hanners, whose father, Douglas Hanners, founded the ARC back in 1981.

The needle dropped on a new era last year when the mass volume musical excavation returned to Central Austin after years on North Lamar at the Crockett Center. Attendance spiked and with this weekend's dealer turnout at an all-time high, the Hanners plan to double down in 2017, restoring the ARC to a biannual market running in the fall and spring. The range of experience at the ARC remains vast, a melting pot encompassing casual shoppers and teen dates scooping up common LPs to professional buyers dragging wheelie suitcases full of bulk purchases.

At heart, it's all for the love of music, so "Playback" profiled some ARC archetypes:

They couldn't care less about your crate of classic rock LPs. These guys are looking for obscure gems of mythical rareness for their library-like music collections.

"What I deal with is very rare and hard-to-find material," says John Tefteller, a reputable Oregon-based collector focused on pre-war blues 78s, and R&B, blues, and oddball rock 45s from the Fifties and Sixties. He's been buying records, spending as much as $50,000 in one year, at the ARC since the Eighties. His favorite local score came six years back when for a song he snagged a practically new copy of Henry Thomas' "Cottonfield Blues" 78, which he estimates to be worth $2,000-3,000 because of its unusually pristine condition.

Serious record collectors bemoan that the age of eBay and Discogs.com have made such magnificent discoveries an increasingly rare occurrence. That won't ever deter Tefteller and his ilk, perennials in a business where iTunes is only the very tip of an iceberg now into its second century. You'll find the Pacific Northwester in the Palmer parking lot at the break of daylight on Friday, browsing the boxes of dealers waiting for load-in, and it'll take him until midday Saturday to have hunted through the ARC's full array of 78s and 45s.

"It's a real feeling of accomplishment because I'm actually saving history," he says of finding a rare recording for which no master exists.

They don't call 'em "crate diggers" for nothing.

DJs, both of the dance party and sample-happy variety, can be seen flipping through collections at the ARC annually. Naturally they're seeking fresh grooves to incorporate into their mixes. Dan Gentile, one fourth of Austin's house and disco crew Flying Turns and also a selectah at intimate lounge gigs, is a veteran attendee.

"The ARC is great for finding old funk and instrumental hip-hop," he reports, noting that he scored an affordable copy of MF Doom's Special Herbs + Spices beat compilation there.

Sellers can be notoriously light on electronic music, but if Gentile asks a vendor if they have any 12-inch singles, they'll usually direct him to "a box or two with some cool old weird disco." He's snagged some gems like a hard-to-find collection by left-field house maestro Daniel Wang.

"If a vendor is really heavy on one genre, like it's clear that Americana is their thing, their crate of funk and soul might be a very rich trove that they haven't priced right or hasn't been combed over by other shoppers," he winks.

"It was like the United Nations at times," remarked Doug Hanners about overseas customers at last year's show. "We're gonna need interpreters if this keeps up."

The ARC regularly yields shoppers from Asia, Europe, and Australia – some of them working serious import jobs. This year, Tokyo-based music businessman Take Shimizu has been hired to lead a four-man vinyl buying expedition for Japan's arm of chain store HMV. Unlike collectors only looking for rarities, he's amassing a giant stock of rock, blues, reggae, funk, soul, and jazz to serve the growing Japanese vinyl market.

"We're going to buy huge quantities, so we'll have to ship a couple times," says Shimizu of the 20-day American adventure, which begins at the convention. "Our target number for this trip is at least 5,000 records."

Shimizu, who first came to the ARC as the vinyl buyer for Manhattan Records in the Nineties, considers the convention a very important "information source" for his work.

"With many dealers, shops, retailers, collectors, and DJs bringing their records to one place, it's easy to make new relationships," he says. "Every year I go, I make new connections. The next trip I go to their house."

Between the grooves on old records isn't the only place you'll find musicians at Palmer. Austin musicmakers stand on both sides of vendor tables: selling from their private collections and shopping for vintage vinyl. Jason Chronis, bassist of local psych-pop darlings Tele Novella and bygone indie breakouts Voxtrot, has ARC'd since 1999 and for the past two years now ventured into selling records.

A collector and online dealer, Chronis savors obscure 45s: regional garage, rockabilly, and R&B, plus old private pressing LPs of strange folk and psychedelia. He appreciates the varied fields of expertise among vendors.

"There are dealers that are very specialized in certain genres. If you're looking for something extremely specific, there's a decent chance you'll be able to find it," attests Chronis. "But [the ARC] has a lot to offer for everyone, because it also has tables with good bargains."

"It's a huge influence on our music," he confirms. "Especially some of the things we've absorbed from the R&B stuff I've collected on 45 and other spooky, nocturnal-sounding records that I tend to gravitate toward."

"There's so much to look at – you can't do it all in one day," says Monsees. "And Sunday's great because the dealers start marking stuff down."

Buck points out that the ARC brings an influx of record-shopping tourists into their store on Guadalupe.

"Typically they'll get into town several days before the show and hit all the local shops," he reveals. "Dealers come here looking for stuff they can take back and sell, collectors come in and buy stuff, and we get people coming in from all over the world. It's definitely a boost for local record stores."

You know, the one carrying a portable record player and a tackle box full of 7-inches. They're an intrepid mix of historian, detective, and explorer, examining the inner circles of ancient discs in white paper wrappings. He/she's a music fan just like you, only not really.

"Yeah the 45 guys are a different crowd," chuckles Dick Blackburn, co-author of Guide to Rare Rockabilly & Rock n' Roll 45 RPMs. "The interesting thing about 45s is a lot of them never came out on an LP. They're on small independent labels. Maybe a one-shot label, maybe they got little to no airplay in a very local area. There's a lot of discovery, more so than LPs I'd hazard to say, because there's so many of them."

Blackburn's been an ARC fixture since 1982. His spectacularly rare 45 finds include Blacky Vale's "If I Had Me a Woman" and Richie Richardson's "The Jump." The onetime Chronicle scribe also wrote a novel, Record Weasels, in which the protagonist's pursuit of a rare 45 entangles him with the mob. So what specific thread does the author think ties together all these unique characters of the Austin Record Convention? 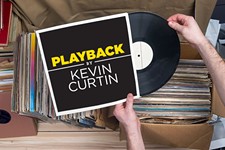 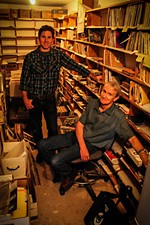