Playback – Lift to Experience: Back at the Crossroads 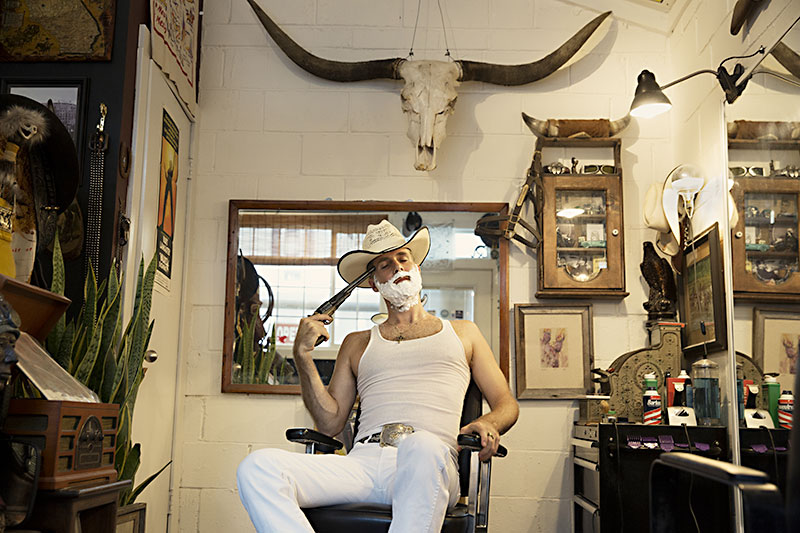 The music world has no shortage of men living in the shadow of an album they wrote early in their career, but few who so openly embrace it as a monument to their existence.

"That's the one good thing I did with my life," says Josh T. Pearson, frontman of the short-lived psychedelic shoegaze trio Lift to Experience, about his band's 2001 magnum opus.

The Texas-Jerusalem Crossroads, a 93-minute concept album about divine intervention in the Lone Star State, has endured as a cult favorite beyond the Denton band's breakup shortly after the album's release. That's especially true in Europe, where the group was championed by Cocteau Twins-born imprint Bella Union. Pearson, his wiry frame folded into a picnic table outside JuiceLand, weeps as he considers the context – both personally and culturally – of The Texas-Jerusalem Crossroads: born of a God-fearing Southern tension, rich with romance and mystery that's since been numbed by technology, and written by three innocent friends who grew up in the church.

"It was my teenage symphony to God," declares Pearson. "It's a perfect record and I stand behind that. There's only a few records that I put up against it beginning to end: [Beach Boys'] Pet Sounds, [My Bloody Valentine's] Loveless, and [Neutral Milk Hotel's] In the Aeroplane Over the Sea."

That statement would sound conceited if not coming from such an obviously wounded man. In the 15 years since LTE abruptly disbanded following an aborted tour that bankrupted them, Pearson's endured divorce and subsequent depression. He's lived in Europe and kept a home in Limestone County, east of Waco. Overseas, he can make a living as a country singer with a broken heart and strong hands on a guitar.

In the U.S., where Pitchfork viciously panned his lone solo album, 2011's Last of the Country Gentlemen, Pearson can barely get a gig.

As he sips his Soul Boulder and ignores calls from an amp repairman fixing the Leslie speaker that hallmarked Lift's spiraling guitar sound, pages are thankfully turning to a new chapter in the North Texan's life. Pearson and Lift bandmates Bear Browning and Andy Young will fly to the UK next week for a reunion show at London's Southbank Centre as part of the prestigious Meltdown Festival, this year curated by LTE fan Guy Garvey, frontman of the colossal British band Elbow. Before that, the trio will play three Texas warm-up shows, including an Austin stop Saturday at Barracuda.

Nothing about this reunion comes easy, however. Two Fridays back, the band picked up its instruments and began the process of relearning material laying dormant for a decade-and-a-half. There was plenty emotional rust to knock off, too.

"Me and the drummer were getting into it – yellin', pushin' each other – last Sunday," admits Pearson. "Two days prior, I'd been sobbing on the couch with his arm around me confessing I was sorry for ruining his life and all that crap."

Pearson's manager, Peter Sasala, has flown in to oversee proceedings. He says the expenses for travel and rehearsal will all but cancel out their payment for the shows.

"This is not about money," he assures. "It's just about making it happen."

Pearson and co. were initially hesitant to reunite, fearing they'd taint the waters with something less pure, but just like when they wrote The Texas-Jerusalem Crossroads, it's time again to risk failing and reach higher.

"It would be a shame to not have a light to shine on it because it was such a sublime work," Pearson says of the album, which is being remixed and re-released by Mute Records this fall. "Having it out there more would not only authenticate me, but the people in North Texas who this music struck a chord with."

When X Games kick-flipped into town in 2014, it seemed apropos for the extreme sports event to capitalize on Austin's vaunted musical reputation and go big with concert programming. As the festival of action sports drags with it a DOA music lineup for its final run at Circuit of the Americas this weekend, those high hopes lay crushed at the bottom of the half-pipe.

Year one boasted three nights of amphitheatre shows including Kanye West, the Flaming Lips, Dillon Francis, and Gary Clark Jr., with a side stage exhibiting local bands. The following year presented mega-headliners Metallica and Nicki Minaj on a super stage, while Austin acts performed daytime sets in the 14,000-capacity band shell to crickets as organizers proved unable to drive foot traffic into the arena-sized bowl. The time-tested formula of simply putting loud bands next to a skate ramp was woefully overlooked.

X Games now vacates Austin after this year due to ESPN's need to stage the event in July, which Austin's nuclear summer makes impossible. COTA Managing Director Sharilyn Mayhugh confirms the venue isn't co-promoting entertainment this year and that the business relationship with the cable sports network is essentially a venue rental. Likewise KUTX, which sponsored the event's local music programming the past two years, has dialed back involvement with music.

The result is two of 2016's most generic summer tours being routed into COTA for X Games: Friday's combo of G-Eazy and Logic, both of whom look and rap like JC Penney catalog models, and pop/punk boy bands All Time Low and a partially reunited Blink-182 on Saturday. The take home?

Over the course of 10 days, you could potentially witness 28 hours of Prince covers, beginning yesterday with "An Austin Salute 2 Prince" at Antone's, which reruns tonight, featuring the Purple One's onetime backing band Grupo Fantasma laying it down behind acts like Shinyribs and Nakia. On Saturday, Threadgill's welcomes local Phish and Widespread Panic tribute bands jamming out Prince's hits for people curious about what "Pussy Control" would sound like with a 45-minute guitar solo. The same night, AJ Vallejo's Prince revue, Perfect Nation, drops two sets at One-2-One Bar, 9pm and midnight.

On Prince's actual birthday, funk fetishers Foot Patrol blow out candles with a front-to-back cover of Purple Rain at Hotel Vegas. Eastside lounge Stay Gold gets in on the action next Thursday with indie-rock Prince worship from Yuma and Mid Century. Friday, June 10, Riders Against the Storm's soul edifying dance party, Body Rock ATX, which has been honoring "The Artist" since 2012, packs Empire's dance floor with pure Prince.

R.I.P Mark Hutchins: The Rockland Eagles singer died unexpectedly last Saturday in New Jersey at the age of 51. A talented multi-instrumentalist and rock & roller to the core, Hutchins' discography goes deep, but Austin knew him as a frontman who played DIY stadium rock with elements of punk, glam, and power-pop, hallmarked by a cock-rock delivery and low-slung stance. A powerhouse early on in this millennium, Rockland Eagles played infrequently in recent years as Hutchins lived on the East Coast where he worked on The Late Show With Stephen Colbert.