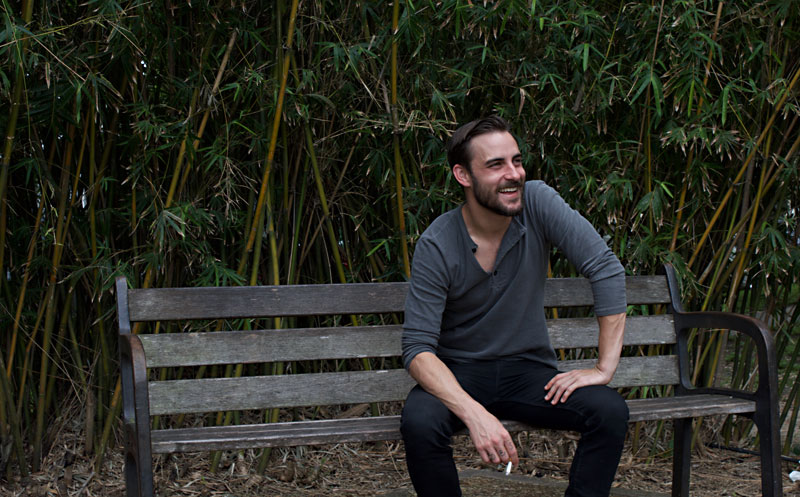 In the back gallery room of the Menil Collection in Houston, Robert Ellis stares at René Magritte's painting The Invisible World with a crooked grin of delight, his soft hazel eyes contracting.

"I used to live in these apartments near here when I first moved to Houston," whispers the 27-year-old songwriter. "I would come here almost every day. I would take mushrooms or acid and just come in here and spend hours by myself. Put my headphones in and listen to music and stare at the paintings."

His hushed tone echoes in the art sanctuary, a contrast as dramatic as the Belgian surrealist's bizarre landscape. The 1954 canvas unsettles: a balcony window opening out onto an expanse of ocean and darkly gathering clouds, but incongruously obstructed by a giant boulder inside the house. The outside turned in.

Abstracting its appeal for Ellis comes easy in the face of his own compositions, which refuse to settle on easy patterns. His songs intentionally spill in unexpected directions, narratives that draw the listener in only to turn with the sudden flourish of the arrangement or stylistic twist.

"I'm interested in the things centered around conflict," he laughs. "No good story is without conflict."

Ellis' musical background tours through jazz clubs and bluegrass bands, all of which meld into his work and has made him one of the key young songwriters in the suddenly broadened Americana scene. His eponymous fourth album, released this week on New West Records, dispels expectations by eschewing easy classification.

Self-produced at Houston's legendary SugarHill Recording Studios, his most ambitious album drives more directly personal than previous LPs, exploring the emotional complexity of his recent divorce and return to Houston after a period in Nashville. As with Ellis' life, the album thrives in opening the unknown, the improvised space between decisions, and the wonder and thrill of constant motion balanced against sincere reflection.

Relishing the role of tour guide amid the warped world of Dalí and angular discomfort of Man Ray, he stops before another, smaller Magritte painting. Tightly cropped dark hair and beard, he exudes a roughish bohemianism mirrored by his playful fascination and familiarity amid the jarring artworks.

"I love this," he motions, The Force of Circumstance depicting a wine glass and loaf of bread suspended in mid-air against a serene backdrop. "The color is just crazy. There's always that one thing about it. It's so photo realistic in some ways, but the color and the concept ...

Growing up in the small town of Lake Jackson just south of Houston, Ellis kept pace ahead of his peers. He was teaching guitar by the eighth grade, and in high school, his bands toured. He dropped out his junior year.

"Everybody, even if they believed in what I was doing, still said I needed to go to college and get a degree, that I needed a backup plan," he nods. "I just don't think that's any way to live. A backup plan is kind of like an admission of defeat before the fact. So it was a very conscious decision, but then, I was also just a shitty kid and didn't want to go."

He moved to Houston the following year, picking up gigs in jazz and R&B bands before finally focusing on his own songwriting with 2009 debut The Great Rearranger. He also began a weekly residency at Fitzgerald's, where his "Whiskey Wednesdays" allowed him to rip hard country and honky-tonk. That built a fervent following.

That success proved a double-edged sword by the release of his second LP, 2011's Photographs. The acclaimed New West effort pigeonholed the rising songwriter in the budding neo-traditional country movement. The disc's A-side delivered gently sophisticated ballads, but his reedy twang paired almost too well on the backside's swooning country throwbacks like "What's in It for Me?" and the title track.

Ellis bristled against the heavier country expectations that accompanied Photographs' reception, expanding his live performances with a wider stylistic reach and more improvisation. He refused to see his growing interest in intersecting genres as a contradiction rather than in line with the tradition of eclectic Texas songwriters like Willie Nelson and Doug Sahm.

"A lot of my favorite country bands, like Ernest Tubb & His Texas Troubadours, those guys are all closet jazz nerds," he attests. "Bob Wills, even. There's a long tradition of rednecks that were super into jazz."

He determined to emphasize his own unique direction with 2014 follow-up, The Lights From the Chemical Plant. Accompanied by his move to Nashville, the album sounded as an elegy for one chapter of his career while opening another. Over seven minutes long, "Houston" drips nostalgia before sliding into an extended jazz-inflected jam.

"One of the benefits of going with the grain, is that if everything goes to shit, you can just blame it on the process. Blame it on everybody else," he says. "Like if I had gone to college and failed, I could say that obviously I did everything that I was supposed to do, so it's not my fault. But when you take the onus upon yourself to construct your own narrative, and then you fail, you're the only one to blame.

"So there's a lot of risk with that, but the reward of it – of succeeding – is so much greater."

The knuckles of Ellis' right hand are tattooed with the letters "D-E-S," short for his ex-wife's name, Destiny. The dissolution of the couple's five-year marriage became official six months ago.

"I was touring constantly the entire time we were together," he admits offhandedly. "It's a lot of things, but to me, the real thing that happened was we just realized we don't want to be married. So we're not married."

His nonchalance reflects less the emotional impact of the decision than the emphasis that they want to remain close. Destiny even appears on the cover of the new album, her image framing Ellis out of focus as he stares into the camera.

"It's our own kind of narrative to write, and I feel that both our lives are richer for it," he shrugs.

If Chemical Plant looked to re-establish Ellis' sense of musical adventurousness against a ruminative backdrop of his Houston tenure, then the eponymous LP pushes even further in its arrangements while striking an affecting immediacy. From the opening track "Perfect Strangers," with an abrupt mid-song influx of strings, to the sharp, discordant piano strikes of closer "It's Not OK," the raw turmoil of the subject matter serves as an appropriate foil to Ellis' blatantly divergent compositions.

"Maybe I'm my own worst enemy in that way," he offers. "I don't sit down and start writing a song and think how I can fuck it up and make it weird. It's definitely not conscious. It's more that the things that I find interesting just happen to be things that other people find jarring.

"When I'm in the studio or at my desk writing, I'm following the thread of what's interesting to me and chasing it. Anything that excites me and keeps me wanting to do this job, I have to follow it."

Despite his insistence on the divisive elements to his arrangements, Ellis still proves capable of crafting intimate and evocative narratives, such as the bluegrass-inflected "Drivin'." If the new album doesn't perfect a symbiosis between compositional ambition and lyrical impact, it moves closer to its author's vision of improvising beyond generic expectations.

"I really just try to focus on what's right in front and not to look too far ahead," he says. "The pleasure to me is not in the accomplishment. It's the movement, the everyday. The show and the improvising. If I can stay in that, then I'm happy.

"It's a similar process in the writing and arranging. I'm at my best when I'm not completely in control." 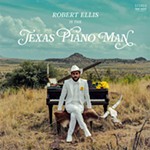 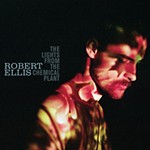 Robert Ellis
The Lights from the Chemical Plant (Record Review)