Waylon: Tales of My Outlaw Dad


The Grand Tour: The Life and Music of George Jones

The firstborn of Waymore's five children, Terry Jennings emerged a key member of his father's road crew, seeing the world looking at Daddy's backside alongside those of his fivepiece band. Between changing strings on Pop's Telecaster, he likely indulged in more debauchery than his old man, frequently buying cocaine off of him. Somewhere along the way, he learned all the ins and outs of Waylon's story, filling in gaps that were left out of the singer's mid-Nineties memoir. It's a tale expertly told, with love and a 12-stepper's regret for crimes committed. Waylon: Tales of My Outlaw Dad even delivers sharply defined, affectionate portraits of key players in the drama, like triumphant wife Jessi Colter and steel guitar legend Ralph Mooney.

Veteran country music journalist/historian Rich Kienzle accomplishes a tour de force in The Grand Tour: The Life and Music of George Jones. Crafting a blemishes, blisters, and scars profile of "Possum," the author never glosses over any hijacking of a lawn tractor for a liquor store run, Jones' many non-appearances, or booze-fueled mistreatment of Tammy Wynette. Equal weight is given to Jones' native artistry: his method actor-like tendency to unearth the emotional core of any lyric, unique phrasing that spawned Wynette's quip, "He's the only man who could make 'war' a four-syllable word!" The drama behind "He Stopped Loving Her Today," frequently hailed as country's greatest single performance, is worth the cover price alone. 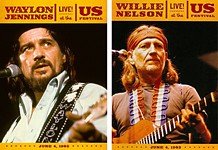 Willie Nelson, and Waylon Jennings
Live at the US Festival (Record Review) 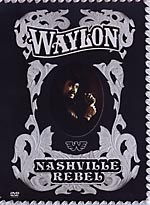