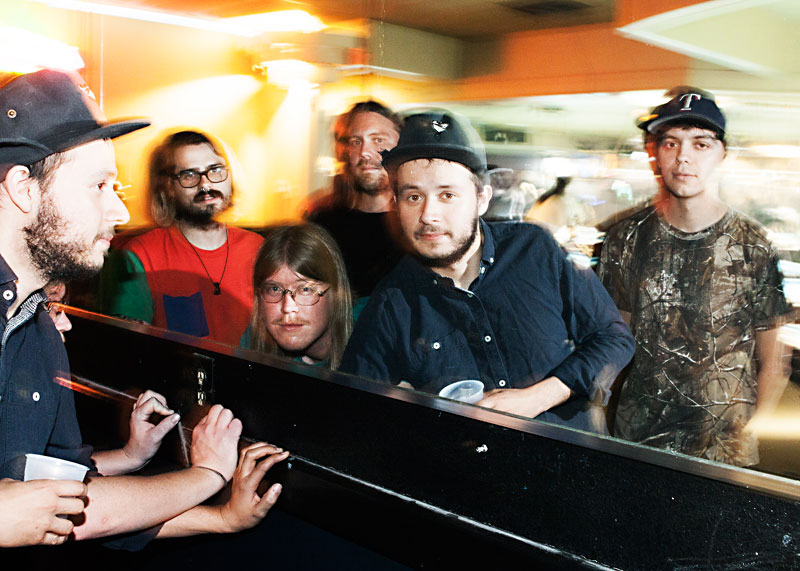 "Nothing fuels a man like a grudge," says Ryan Fuson, recounting how fellow Holy Wave member Kyle Hager kicked him out of a band when they were teenagers in El Paso. Fuson couldn't tune a guitar. He was just in it for the image.

"Dude, after that you got so good at music!" Hager insists.

Following a six-week tour of mostly headlining shows in Europe and only days after Levitation's unprecedented cancellation, Fuson, Hager, Julián Ruiz, and Joey Cook (fifth member Dustin Zozaya is absent) ponder Holy Wave. An ethereal pulse of guitar psychedelia, the Austin fivepiece contrasts the music permeating their border town. There, meeting as teens through their respective bands, bedroom jams between Hager and Fuson yielded ambient explorations even as the rest of their local scene was governed by hardcore kids.

As the band members ventured out into other parts of Texas, they eventually ended up squatting in a San Marcos apartment for several months. Aural explorations emanating from a shack in Bulverde solidified into Holy Wave. The live music capital came next.

"We played probably 60 shows at Beerland before we played any other venue in Austin," nods Hager.

Across their discography of EPs and LPs, Holy Wave has retained a thoughtful, astral quality. 2011 debut Knife Hits distributed a fuzzy, lo-fi jumble interwoven with glimmers of shoegazing jangle that coalesced into this March's Freaks of Nurture. If the former sounds like heat waves coming off desert sand, then the latter turns your eyes from the ground to the sky, trading high noon for a sprawl of stars in black-blue firmament.

While Holy Wave's Freaks of Nurture cleans and compartmentalizes, the departure doesn't reflect the band's trajectory moving forward. Having put out a polished platter has left the band wanting to revert to their more convoluted roots.

"I don't know if it's progression or regression now," admits Hager. "Or just where we want to be at this point."

Writing and recording anew already on the horizon, Holy Wave hopes to continue cultivating a recognizable, undeniable atmosphere. Technical fussiness is out, the band instead invested in a palpable connector, a communicator. Something they can't describe exactly, but evocative of riff and chord progression. Not easy-listening, but easy to listen to.

"'Wet & Wild' is such a simple song, but we played it a million different ways, and when we played the really simple version, it sounded really cool," says Cook, referencing the closing track on Holy Wave's second full-length, 2014's Relax. "Now I hate playing it – it's so simple – but when we first heard it, wanting to play something harder took a backseat to the sound of the song that just happened."

"I don't think we're note-y people," Fuson adds. "We're not like, 'Let's see how many notes we can put in.' We wanna make a progression that really stands out, but I think we can do that 100 times and if we still don't get that feeling we're talking about, we'll just scrap that song. Hopefully, we'll make a song that gets that feeling across but also stimulates our desire to be respected by musicians, you know?"

Hager agrees by referencing one of the group's musical heroes at the Scoot Inn last month for a Levitation makeup show.

"Dude, Slowdive could've played one chord all night," he says emphatically. "As soon as they hit their guitars, it sounded like Slowdive."

"You can tell we're children of My Bloody Valentine and Slowdive," Fuson says, laughing. "Watching them, I was like, 'Oh, my god. This is why we play music.' No matter how much we try to break away from it, we can't help but be that thing that started us."

Conversation gravitates toward this year's Levitation cancellation. Years ago, a friend of Holy Wave took it upon himself to pretend to be the band's manager, submitting a formal offer sheet to the organizers of Austin Psych Fest, who took the bait and booked the band at its 2011 site, Seaholm Power Plant. A handful of releases through the Reverberation Appreciation Society later, the band was scheduled to perform for a fourth year at Psych Fest, re-branded last year as Levitation.

Ruiz, Fuson, and Hager recount where they were when they got word of the weekend's demise: taking a nap, getting ready for band practice before the fest, and driving a girlfriend to work, respectively. All thought the news was a prank at first.

"It was like JFK being assassinated," jokes Fuson, who's nonetheless spot-on.

What local psych lifer doesn't remember where they were when they found out?

"I will say, though, there was probably one hour of disbelief before all of us were like, 'All right, how the fuck do we make this weekend badass for everybody?'" says Hager. "'How do we make sure everybody's playin' shows?'"

He credits bookers at participating local venues for salvaging what they could of Levitation, particularly the team at Barracuda.

"I don't think it's gone on the record that they saved the weekend," opines Ruiz.

"I think everyone on every different front tried to take care of as many people as they could," says Fuson.

All agree on one point: The Austin music community made the best out of what could've been a total disaster.

While the disappointment of the weekend lingers, the positivity of Holy Wave is palpable. They were booked at the sold-out, absolutely bonkers Barracuda show the Sunday night of Levitation. Although they didn't move to Austin with the psych scene in mind specifically, they're operating at the center of it.

For them, Levitation feels like an annual family reunion, pushing past the usual band-audience relationship at festivals and fostering a rare, intricate community of dedicated fans who travel thousands of miles to soak up the psych at Carson Creek. It's another feeling they can't quite put their finger on, but Fuson takes a guess.

"It's the Texas mystique, man." 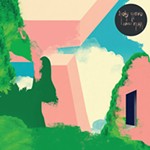