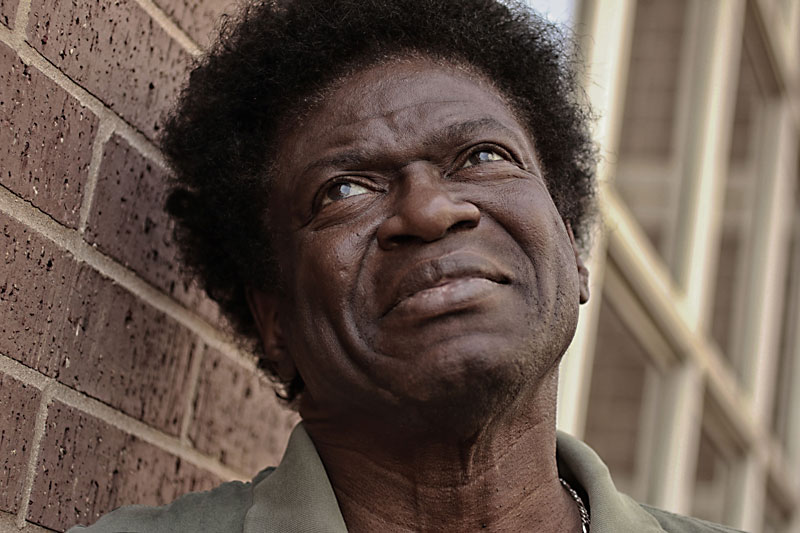 As we walk toward our table in the quiet cafe of a Downtown Austin hotel, Charles Bradley veers left, distracted by a huge forest-green curtain glistening in the corner.

"Oooooh, I love that material! See that material right there? I'd make the most beautiful outfit out of that material that you've ever seen. For tonight I bought a dungaree suit, cut it up, and fixed it to my liking."

True to his word, the 67-year-old Screaming Eagle of Soul soars onto the Stubb's outdoor stage during South by Southwest a few hours later clad in black denim, cuffs, and a collar bedazzled in silver sequins, a rhinestone dragon breathing across his back.

"Brothers and sisters, do you feel like going way back? To when music was music and love was love? With the Extraordinaires and Charles Bradley, I'll take you there."

Backed by his sevenpiece band, Bradley revisits 2011 debut No Time for Dreaming and 2013 follow-up Victim of Love before introducing Changes, his latest effort released this month on Brooklyn indie-soul powerhouse Daptone Records. He plays righteous street preacher on "Change for the World," warning that the dark tone of our politics could signal the end times. "Ain't It a Sin" guts out roughneck funk, while the title track reinvents a Black Sabbath ballad as an aching lamentation for his late mother.

"I was there when she drew her last breath, and she told me I was gonna travel all over this world," he eulogizes from the stage. "Every time I sing this song, it's the love of you in heaven, to the world."

The hardscrabble soul man slowly flaps his arms up and down like an eagle, belting out an agonizing scream from somewhere deep within, then drops to his knees bearing the mic stand on his shoulder like Jesus carrying the cross. A former handyman and short-order cook, Bradley was born to do exactly this.

Austin holds a special place in the remarkable rise of the Florida native, and Bradley consistently credits Europe and Texas for putting him on the map. He was one of SXSW's biggest breakouts in 2011, when he literally stained a stage with blood, sweat, and tears.

"Do you remember when I did the splits and got that splinter in my leg?" he asks of his blistering performance at Cedar Street Courtyard five years ago. "Ever since then they make me wear knee pads. I don't do that all the time. When the spirit hit me and the music got in my soul and was rocking me inside, then I'm gonna let it happen."

The spirit struck again in 2012 at UtopiaFest, where Bradley poured his heart out in the midst of a torrential downpour some 150 miles southwest of Austin. It's the defining performance of the festival's eight-year run.

"I remember that," he delights. "When we were coming onstage it had just started raining. Everybody had these plastics on and the grass was already soaked and muddy. I couldn't stand to see everyone sitting out there in the rain waiting for me to come onstage, so I went out there in the rain.

"The wind started blowing and when I grabbed the microphone it gave me a shock! But I said, you know, 'If you people can stand out in the rain and watch me sing, I'm gonna come out there with you.' I jumped off the stage and got muddy.

"We was hugging, we was crying, we was laughing. That was one of the best memories."

Bradley leaves it all onstage, giving a piece of himself to the audience every time out. Still, somehow, he sounds better than ever at full retirement age. That's part biology, part biography.

Unlike countless other soul survivors, there are no vintage 45s bearing his name. Lee Fields and Bettye LaVette didn't peak until this century either, but the former spent decades grinding on the southern soul circuit, while the latter was no stranger to the R&B charts. Even late-blooming Daptone labelmate Sharon Jones dropped her Dap Dippin' debut at the relatively tender age of 45.

Bradley, now 67, didn't launch his career until an age when most have already hung it up.

"I wish it would've happened at an earlier age, but it's not for me to question," he muses. "I tell you what, though. I kept my love strong. I kept my love alive. If not, I wouldn't be here sitting, talking to you right now."

The long version of Bradley's incredible life story unfolds in Soul of America, an extraordinary documentary that premiered at SXSW Film in 2012. The abridged version – from No Time for Dreaming the previous year, "Why Is It So Hard?" – goes something like this:

I was born in Gainesville, Florida.
I traveled far and wide.
Then I moved to Brooklyn, New York.
Had hard times, for some time I hold on.

Before the world knew Charles Bradley, he was a minor celebrity in his borough, known for a long-running stage show as a James Brown impersonator. A pompadour wig rarely left his head. They called him James Brown Jr. – Black Velvet.

"I've been doing James Brown ever since I was young," Bradley attests. "I mastered that. Everyone in the hood got angry with me when I stopped. They said, 'Charles, you can't let that go, man.'

"But to do Charles Bradley, especially 'Heartaches and Pain,' that was hard. And now this new one, 'Changes,' oh, my God. I get emotional when I sing that song. I'm finding out why I like James Brown so much, and it's because I've got deep soul in me too. I want to bring it out in my own way of thinking and feeling."

Dreaming's "Heartaches and Pain" chronicles the murder of his brother, another dark chapter in a lifetime full of setbacks and sadness. Asked about the contradictions of America, a sometimes callous place that turned its back on Bradley, who suffered the indignities of poverty and homelessness yet ultimately lived out an impossible dream, the singer leans in close.

Bradley knows the harsh reality of what it's like to be broke and black in this country.

"My life has been very bittersweet, but I say 'God bless America.' I've gone through anger and hurt, but it's the only land that I know, so I've got to love my country. Ain't nobody perfect on this planet but God. America is gonna make its mistakes, but it's time for us to come together and be as one.

No Time for Dreaming

Toward the end of his Stubb's performance, Bradley lays his hand across his chest.

"If I can't sing from the heart, I ain't singin' at all," he testifies.

He hops offstage, climbs a barrier, and walks through the crowd as the Extraordinaires groove behind him. One by one, he wraps his fans in a warm embrace. It's a ritual the singer performs at the end of nearly every show.

"I love people, man. Bottom line," he said earlier. "Some things in life you have to give of yourself to receive. If you just go out there and think the world owes you something, you're not gonna get it. You've got to show your love to the world. I believe karma do come around.

"Sometimes it takes a long time – mine sure did – but it did finally come around."