Record Store Day local exclusives, and out-of-the-way wax emporiums that may carry them 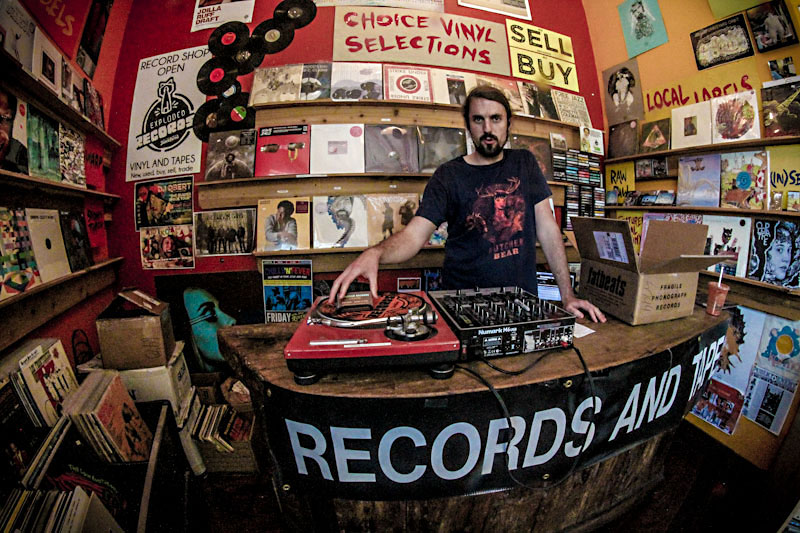 Andrew Brown, aka Soundfounder, in his domain at Exploded Records (Photo by Kevin Curtin)

Indeed, Brown's shop phone will start ringing at 7am on Saturday with anxious record collectors trying to secure limited edition RSD releases so they won't have to later pay a king's ransom on eBay.

"Those collector types – they don't care about the store," shrugs Brown.

And yet the flip side to the international consumer holiday, now in its ninth year, remains the exposure it provides to indie record stores like Brown's vinyl showroom. Since opening in 2013, Exploded Records – occupying a side room at JuiceLand's 45th and Duval location – has been a hot spot for psychedelic beat music, experimental EDM, and underground hip-hop. Over the winter, the site expanded from 500 to 3,000 records, with new sections spanning punk, country, and blues.

"I'm excited for everyone to see how it's grown," says Brown. "And for people who come in for RSD to then enjoy it and form a relationship. Those are the people who are going to keep our lights on for the rest of the year."

For many of Austin's 10 vinyl retailers, RSD stands as the year's biggest single day of sales – a spring stimulus similar to what South by Southwest means for clubs.

"It's a huge boost for us," attests Eve Monsees, co-owner of Antone's Records. "It's basically a week's worth of business in one day."

On RSD, Monsees greets a line of early-morning RSD shoppers with doughnuts from neighboring business Ken's.

"The day tends to start out with people on a mission for specific exclusives," admits Monsees. "Later, though, it just becomes a fun shopping day, which I think is the whole point. I love hearing people say 'Happy Record Store Day!'"

While record emporiums nationwide drop like flies, Austin sustains a wealth of shops – Encore, End of an Ear, Breakaway – all of them RSD 2016 participants, plus crate-digger extraordinaires Friends of Sound and gear specialists Whetstone Audio and Sound Gallery.

"I'm so proud of how cooperative Austin's record stores are," says Waterloo Records owner John Kunz. "We're the only city in the world that has an indie crawl on RSD where you get a discount by bringing in a receipt from any other record store. We're saying, 'Thanks for shopping, but don't stop here. Go check out End of an Ear or another great local store.'"

Alejandro Escovedo, Gravity and Thirteen Years double LPs: Former local's first two solo efforts, produced by the late Stephen Bruton for the even later Watermelon Records, land their deluxe reissues on vinyl for the first time – though only 1,200 copies from New West Records.

RSD Off the Beaten Path

Ever consider a record-shopping road trip outside of Austin's city center?

Piranha Records
1208 N. I-35, Round Rock
Round Rock's sole record store might give Austinites flashbacks of Music Mania, a hotbed of Texas rap sandwiched in a strip mall. Yet Piranha flexes more style with a bounty of streetwear advertising one's love for sippin' lean and being a "Trill OG." Setting them apart from Caucasian-catering markets, the 13-year-old retailer comes stocked with regional rap releases and fresh mixtapes, but also boasts an extensive selection of new and used vinyl, including deep sections of soul, R&B, and jazz. A sign on the door advertises an important unofficial RSD release: the debut vinyl pressing of DJ Screw's 3 'n the Mornin' (Part 2).

StingRay Records
243 N. Union Ave., New Braunfels
Occasionally a sign hangs on the door of StingRay Records: "Gone to deliver a baby." That's because Dr. Kevin Blair doubles as New Braunfels' record store clerk and ob-gyn. A punk-educated vinyl obsessive whose personal collection exceeds 40,000 LPs, Blair opened StingRay three years ago in an old house, capturing the laid-back vibe of a Seventies-style record store. StingRay's customers include water park tourists and record nerds from neighboring metropolises who can wander in, strum a guitar, play a game of chess, and talk music history with the rock doctor amongst a hoarder's dream of new and used LPs.

Roky Erickson howled at the moon last Friday with a free surprise concert in the backyard of Indian Roller – his first show this year. Warming up for a European tour, the 68-year-old native third eye and his Hounds of Baskerville gave fans a 90-minute 13th Floor Elevators-focused set including a liquid version of belated Easter egg "Slip Inside This House."

Clifford Antone was already a cultural preservationist through his blues club. Now, a namesake nonprofit continues that work. The new Clifford Antone Foundation intends to preserve Austin's music history by facilitating care for elderly musicians and archiving local blues artifacts. They also focus on the next generation by supporting programs that mentor underprivileged youths and up-and-coming artists. Become a member at www.cliffordantonefoundation.org.