Hayes Carll reappears without the riddles 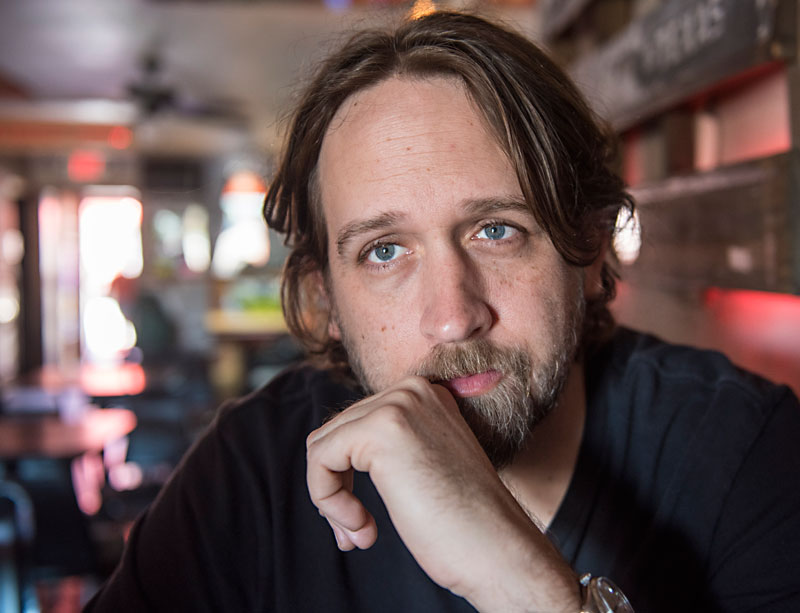 The songwriter stares toward the back of the Little Longhorn Saloon, where the door stands open to a gray day spitting rain. In an hour, friends and their families will start arriving at the small Burnet Road honky-tonk for the finale of a video for his new song, "The Magic Kid." Today's shoot calls for a barbecue scene in the parking lot, but the weather is forcing some improvisation.

Carll's piercing blue eyes tint darker as he steps outside to smoke a cigarette and ponder the clouds. For the past half hour, he's been sitting on a stool in the corner of the bar, strumming his guitar to a recording of the song as the crew films different takes. Leaden skies match the nostalgic melancholy and earnest wonder of the song.

Pick a card, any card

Don't show it to me

I've got nothin' up my sleeve

And I may get it wrong or get it right

But either way I'm standing in the light

Where nothing is hid

The 12-year-old working the bar with card tricks, Eli Carll, demonstrates the natural showmanship of his father, and the same drowsy but penetrating eyes, only darker. The two used to team up on South Congress, one performing street magic and the other busking. Now, Eli sets up at the merch table and does sleights of hand for onlookers.

"What was interesting to me was that when he failed, when he didn't pull off the trick, he was completely undeterred," marvels Hayes. "I don't know that I've ever had that fortitude. What I saw in him was this fearlessness and determination to be what he was, and not an ounce of consideration for anything else. How amazing is that, for him, or anyone, to get through childhood and be unique and be themselves and not conform to what everybody else is?

"I wanted to capture that, and just let him know, too, that I saw it and that I was proud of it, and try to reinforce that's not something you have to give up. This life's not going to be easy, and there are going to be a lot of times where you just want to take the easy path and be what everybody wants you to be and let go of yourself in the process."

"The Magic Kid" represents a new perspective for Carll. Despite the success of his fourth album, 2011's KMAG YOYO (& Other American Stories), Carll found himself at the crossroads of a career and life he had built. As he graduated to larger stages, constant touring and living up to his self-cultivated image of drunken poet troubadour took their toll.

Carll turned 40 in January. He and his wife divorced after being together since college. The label that released his previous two albums to widespread acclaim folded. Now, after a five-year wait, Lovers and Leavers delivers a startlingly personal set of songs, powerfully stripped back from the raucous, clever narratives that have been Carll's hallmark.

Outside the club, the dreary weather finally begins to break, his friends arriving and the bar filling with kids. Eli sits cross-legged on the stage, and the camera zooms in to catch his hands flipping through a deck of cards as "The Magic Kid" plays once more. Carll watches over his son's shoulder, the earlier look of professional concern ceding to paternal protectiveness. A slight, crooked smile breaks across his face as Eli flicks a card directly at the camera lens and lands the perfect final shot.

Raised in the Houston suburbs, where both his parents worked as attorneys, Carll lit out on his own path after college. He set up along the shores of Crystal Beach, playing roughneck bars and honing his songwriting. "There was an ocean and a gig, and that's what I was looking for at the time – just some life experience to write about and a good place to do it and go practice every night," he told the Chronicle almost a decade ago (revisit "Trouble in Mind," June 6, 2008).

After scoring a job at storied venue the Old Quarter, Carll made connections opening for legendary songwriters passing through. He particularly impressed Ray Wylie Hubbard and Guy Clark, both of whom he wrote with for 2005 sophomore LP Little Rock. A Hubbard collaboration also kicked off Carll's 2008 Lost Highway debut, Trouble in Mind, the picaresque "Drunken Poet's Dream" still a favorite of both musicians' live sets. The album captured Carll's roguish yet sensitive sensibility, narratives excavated from his beach bar days and delivered with wry rhymes and easy melodies.

Three years later, follow-up KMAG YOYO (Kiss My Ass Guys You're On Your Own), a rousing stomp and holler, showcased Carll at his most bitingly satirical and earned him an Artist of the Year nomination from the Americana Music Honors & Awards. The wrenching "Chances Are" garnered a 2016 Grammy nod for Best Country Song via Lee Ann Womack's cover. KMAG also launched him at festivals, unloading beer-raising anthems to ever more fervent crowds.

"I love seeing thousands of people just going nuts and singing along, but I never really expected that to be my thing," he admits. "I can't say I've ever been super comfortable as a frontman in that environment. I think that's why I drank so much for so long – that insecurity onstage. I didn't have faith that people would like me for being me, so I had to assume some kind of character. The drunken, rambling, good-time poet was that character, capable of moments of depth and sincerity, but it's hard to be vulnerable in life and onstage.

"As a result, I felt I had never quite gotten to where I wanted to be as an artist."

Tours and crowds increasing, so too did Carll's realization that he wasn't just missing moments of his son's life, but entire seasons.

"At a certain point it became clear to me that this wasn't as rewarding as it once was and wasn't the life I wanted," offers Carll candidly. "I was trying to be everything to everyone and I lost myself a little bit. The years started going by quicker and quicker, and I realized there were a lot of things I wasn't happy with, and that I could close my eyes and go right back into what I was doing, and another 10 years would go by. If I wanted to live the life I wanted, I needed to figure out the kind of life I wanted.

"My personal life kind of unraveling definitely made me become aware of what I had and didn't have."

The Love That We Need

Lovers and Leavers echoes 2002 Carll debut Flowers and Liquor in title, but from the road weariness of "Drive" and letting go of "Good While It Lasted" to the unvarnished pleading of "Love Don't Let Me Down," the new album's sparseness unfolds with a naked directness.

"It's a questioning record," allows its author. "I'm not giving any answers because I don't have any to give. That's where I am in life, which is pretty thick in the process of just trying to figure it out. The songs are reflective of that. I'm searching, these characters are searching."

The album also represents an exercise in trust for Carll. He handed over production almost completely to master song stylist/producer/artist-in-his-own-right Joe Henry. Every song is also a co-write with seasoned pros like J.D. Souther and Jim Lauderdale, including "The Love That We Need," written with new girlfriend Allison Moorer and Jack Ingram.

"I have my tricks and my style, but writing with people helps me open up and be honest and say what I mean," he offers. "You build up habits you're not aware of sometimes, like I want to fill every space with sound, with a lyric. I'm really reluctant to have open space. It feels vulnerable to me, like I'm losing control in some way.

"But it doesn't always have to be clever," continues Carll. "You can say, 'I'm hurting,' and you can do that in a creative, artistic way that's even more powerful than couching it in riddles. That was eye-opening to me. This was a way of communicating for me that was exactly how I wanted it to be."

He also voices belief in his fan base following him to a more intimate destination on Lovers and Leavers.

"I think people appreciate authenticity and are hungry for that," he says. "They're looking for somebody that's original and true and honest in telling their story. I always want my music to connect with people, but this is the first time where I did what I needed to do creatively, and I didn't let those fears about anything stop me.

"This job is too great and I'm too lucky to do this and have an audience not to be happy doing it. Feeling like I was doing the same thing every night was not going to leave me in a good place. So now is the time. I have this opportunity to go in a different direction, and I might lose some people in the process, but hopefully I'll pick up some people as well. That's the evolution of a career.

"I had to let go of my fears of people not liking it."

Last month at SXSW, Carll put the new songs to the test across eight shows in four days. For his official Thursday night showcase at the Gatsby, he emerged with only guitar and drums backing. The crowd roused predictably for "KMAG YOYO," but soon enough, Carll changed gears.

"Most of my songs are about drinking and women, and drunk women," he laughs from the stage. "This is my first song about my son."

This world can be so full of darkness

And blown out flames

But you shine your light for everyone to see

The only one I've known who's truly free

Yeah, you just are what you will always be

You're the magic kid

Against the blaring din of SXSW, with eyes closed, Carll softly closes out the song. When he opens them, the crowd is hushed and then erupts in approval. In that moment, he's experienced something even more powerful than leading thousands of fans in rowdy sing-alongs: the ability to silence a room with a song. 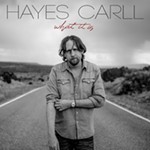 Hayes Carll
What It Is (Record Review)

Hayes Carll
For the sake of the song