Lukas Nelson & Promise of the Real

Famed father and rising son issue new LPs practically within seconds of one another. Any common ground – other than DNA? Uncanny vocal resemblance to papa, Lukas Nelson's been scything his own path in rock's overgrown backyard. Pruning the weeds to create psychedelic blues/jam rock, junior's third LP yields epic riffery in "Surprise" and the title track: "I want to see you get mad, I want to see you crying," he hectors a faithless lover. "Give me something real!" There's also dark country rock on "Set Me Down on a Cloud," and a revealed connection between performing the chestnut "Georgia on My Mind" onstage with Willie and the haunting of Lukas' mind by a young lady also named "Georgia."

Willie, meantime, returns once more to the American songbook he so brilliantly embraced with his aforementioned cross-platform hit and accompanying Stardust LP. Now, the Red-Headed Stranger applies his touch to a sole composer, the imminently witty and erudite George Gershwin. The tack Willie & Family take with gold like "Someone to Watch Over Me," "Let's Call the Whole Thing Off," and "I Got Rhythm" could be dubbed cowboy cocktail jazz. Brushed drums, sister Bobbie Nelson's articulate piano, stand-up bass, Mickey Raphael's melancholy harmonica, the occasional dollop of steel guitar, and the bandleader's patented gypsy jazz guitaristics and well-seasoned voice embrace some of the most intelligently crafted lyrics written. File among your midnight listens.

Something Real reveals the link: Lukas inherited Willie's deft interpretive skills, via, of all things, 1967 Scott McKenzie Haight-Ashbury cash-in, "San Francisco." You'd think an invitation to wear some flowers in your hair would never fly in 2016. Yet, through an imaginative, dynamic arrangement, fiery Strat mangling, an astute Neil Young cameo, and Lukas' impassioned vocal, the cobwebs and patchouli-scented whiff of the Summer of Love are eradicated. Tune polished to gleaming, something eternal emerges from nostalgia's shackles. "San Francisco" now belongs to Lukas Nelson. 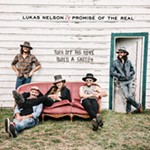 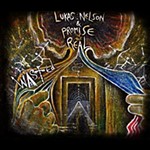