Out of the Gutter 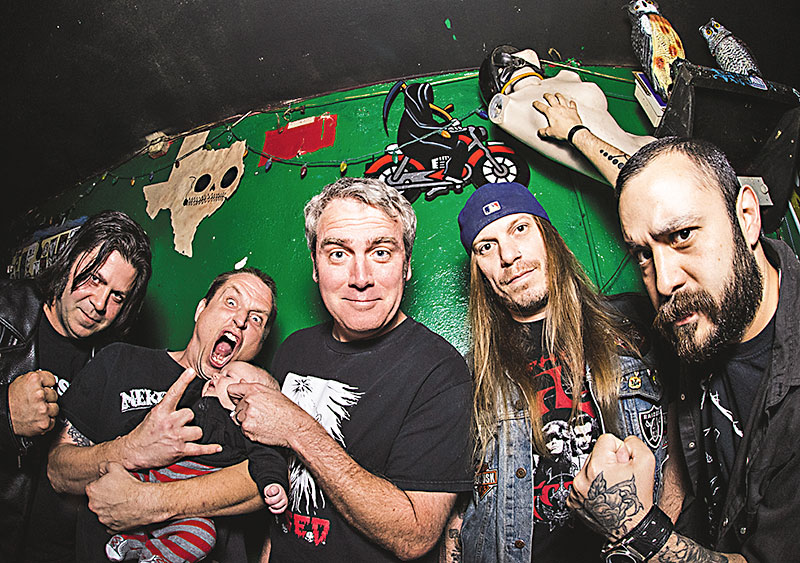 The needle catches groove on a grape Tang-colored piece of 12-inch wax revolving at 45 rpm on the turntable. Suddenly, a gruff low tenor starts declaiming:

It's been a long, fraught journey from the first tuning of soon-to-be-battered guitar strings to the shipping of finished masters to the pressing plant. Yet the 13 slices of dragstrip guitar, battering ram drums, and the patented paint-stripping throat emissions of sole remaining founding member Gerry Atric (née Gerry Schroeder) – along with a second guest appearance by another new Austin emigre, Dead Boys guitar legend Cheetah Chrome – represent the best distillation of everything Bulemics. Atric joined forces with the remains of local hardcore outfit Trailer Park IV to form what would be the sleaziest Austin punk band of the Nineties.

"I was listening a lot to the Dwarves, GG Allin," says Atric between bites of fried chicken not far from where he grew up in Austin's Oak Hill district.

Factor in a love of Eighties glam metal, plus a penchant for self-mutilation, wholesale destruction of every microphone and mic stand he ever encountered, and a mythic absorption of any controlled substance within reach, and you have the singer leading the Bulemics into speedrock legend, with a reputation spreading well beyond city limits.

"We didn't know how to play!" he exclaims. "We would've never put out an album this tight back then. Half of it has to do with being drunk, and getting drunk was only a result of stage fright. Back then, Gabe [Barber, original Bulemics guitarist] was the talent. We were all trying to keep up with him."

This certainly can't be said of the 2-year-old lineup that tracked Something Wicked. With Atric and 18-years-running rhythm guitarist Wes Texas now the group's only mainstays, drummer Chris "Machete" Alaniz's jazzy pummeling, bassist Rob U. Blind's sub-thermal bass, and Ginchy's tight riffing and even tighter songcraft results in the most accomplished, skilled music of the Bulemics' career. Which doesn't change the band's intent.

Atric describes Something Wicked highlights "Back in the Day" and "How I Roll" as "a bunch of dumb punk rock songs," whose long-player birth was protracted and painful.

"Total bitch to make," grumbles Ginchy. "Horrible. Not that it wasn't fun, but it was one sigh after another."

"Honestly, this album was so stressful for us," recounts Atric. "Mixing it three times, recording it in several different studios, having it mixed and mastered several times. It was recorded all over the city. No members were ever in the studio together, which sucks. Guns N' Roses does that. Punk rock bands shouldn't do that."

Working with Bushwick Bill must have been fun.

"Wes' idea!" laughs Atric. "Bushwick was staying at a friend of ours' house last South by Southwest, so Wes called him up. Two days later, we were in the studio with Bushwick Bill in front of the mic. We have 10 minutes of Bushwick Bill talking. That 20-second snippet, I had to put together from about 10 different segments!"

"Some of it was really funny," smiles Ginchy. "But we weren't going for the XXX-rated Geto Boys record."

Believe it or not, every member of the Bulemics is now a family man.

"I've got a photo of Bushwick Bill with my newborn son, Rex!" grins Atric.

"We all have photos of him with our kids," corrects Ginchy.

Families? Gerry Atric free of drugs, alcohol, and cigarettes, engaged to be married to Rex's mother? And talking about leaving his longtime day job as a cab driver to return to school and get a drug counseling degree? Musing aloud that his self-described "controlled chaos" onstage is "starting to feel inappropriate"?

Who are these guys?

Maturity only goes so far, naturally. For instance, there's the tale of the Bulemics famously getting booted offstage at their 2014 SXSW showcase at Lit Lounge, after winning Best Punk Band honors at the Austin Music Awards the year before. This led to a period of club ejections and stage walk-offs.

"I was just getting fed up there for a while," grouses Atric. "We were basically playing places where no punk rock band should be playing. Like Lit Lounge. Four songs into the set, this dude comes up to me and says, 'Are you going to settle down?' I said, 'No.' Four dudes put me into a headlock and dragged me off about six songs into our set. No one would have gotten hurt, nothing bad would have happened. They'd never seen anything like this.

"Then there was a couple of other shows where something similar would happen, and I said, 'Fuck this. I'm done.' One was at Dirty Dog. I jumped out in the crowd with the mic in my hand. The soundman ran after me, grabbed me, and said, 'Get back on the fucking stage with the mic.' So, I got back on the stage, threw down the mic, and walked off."

The frontman's correct when he points out that wouldn't have happened 20 years ago at the Blue Flamingo. Still, decades melt away and with a 20th anniversary fast approaching, the Bulemics not only celebrate with their best album, they're already contemplating a quick-and-dirty Eighties cock rock covers record to cement their landmark.

"Like Champagne Suicide, Alleycat Scratch – the bands that didn't make it! I'm lucky to have someone like Ginchy in the band who's into the same stuff. This album was so stressful to make. We need a stress-free recording session to bond as punk rock brothers," he chortles.