Still wearing your SXSW badge or wristband? We don't blame you. 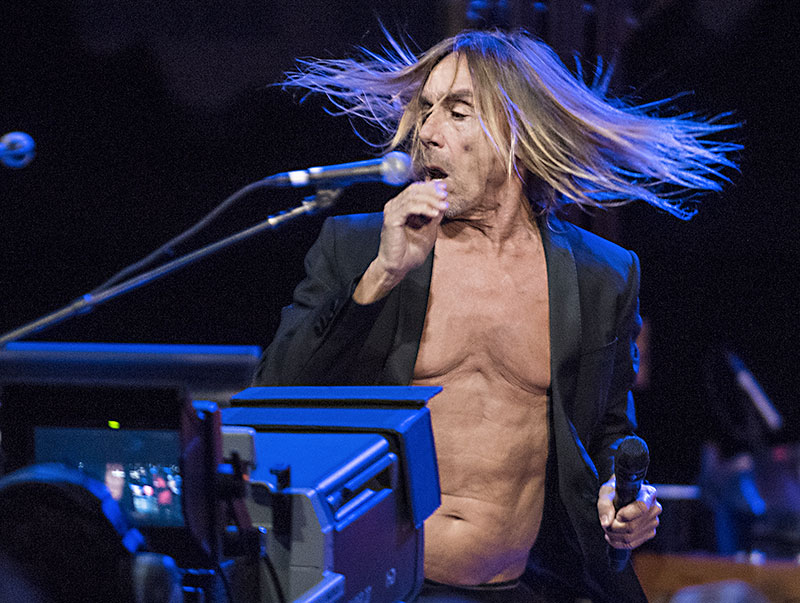 I owe myself some sleep, a home-cooked meal, and quality time with my loved ones, but I can't stop chasing the high of South by Southwest. I wander the parking lot that used to be Spotify House, asking no one in particular what time Chvrches is playing. I try to network with my fellow music cognoscenti, but security keeps escorting me out of the Convention Center.

"That [show] was my anchor so often as I made my way through this town, at least sonically," said the Led Zeppelin frontman and former Austin resident of Ray's Saturday night serenade.

Equally iconic characters from music's cowboy sector made unexpected appearances at SXSW: Willie Nelson giving tourists a true taste of Texas with a spirited Sunday set at Spotify House and George Strait helping Ray Benson blow out 65 candles at the Asleep at the Wheel leader's birthday party. Completing the country trifecta, an official showcase by Kentucky queen Loretta Lynn, wowed Stubb's with her well-preserved Southern grace while her new album, Full Circle, debuted at No. 19 on Billboard's Top 200 – her highest ever on that chart.

Even before Drake's drop-in, the stars of hip-hop distinguished SXSW once again, with the hottest rapper on the planet, Future, steering his sold-out Purple Reign tour into Austin for a singular Wednesday show. Meanwhile, powerhouse personality Vince Staples served as the headliner on a handful of bills including Spotify House, where Staples ridiculed the streaming service for underpaying artists, counting his payment for the gig as "makeup for what you've done to me and all my musical friends."

Other bands showed a more chummy relationship with brands, like the Roots, whose Bud Light-sponsored guest revue was the conference's marquee attraction on Saturday. The three-hour show at Brazos Hall began with Questlove, Black Thought, and the gang warming up the crowd with soul/rap rave-ups before ushering a baker's dozen of guest performances that began with weak pop artists like X Ambassadors' vocal weenie Sam Harris, pompadoured Mouseketeer Emily King, and charisma-free white rapper/R&B singer Marc E. Bassy. Later, the hit parade turned a corner with Too $hort, Talib Kweli, Yo Gotti, Naughty by Nature, pop diva Ashanti, and Big Boi, who rapped a sublime set of Outkast songs and solo material after a segment with his awkward Phantogram collabo Big Grams. 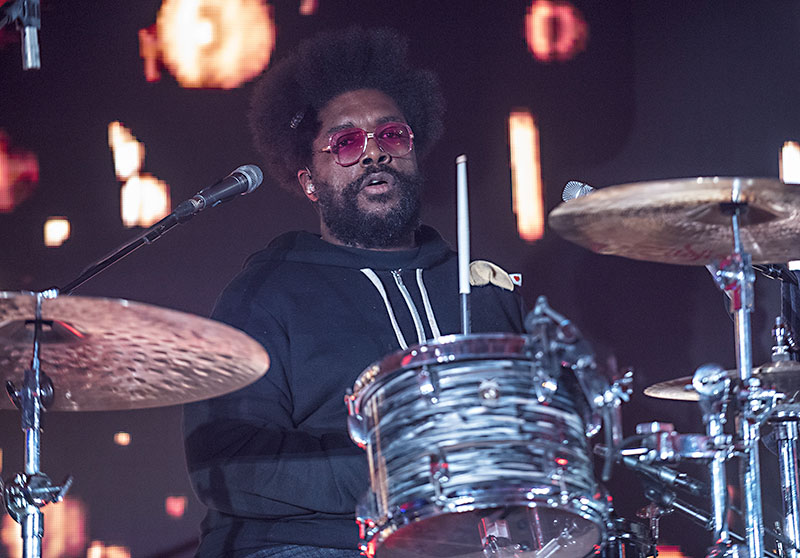 At the epic set's closure, Black Thought, who'd been praising Bud Light all night, announced that the Roots jam would be an annual SXSW tradition made possible by the light beer.

The line of hundreds that didn't get in remained civil, unlike the 2 Chainz-headlined Beer n Tacos party at Austin Music Hall last Friday, where a large entourage bulled past security and entered the club. One individual was spotted with a firearm, which prompted the arrival of APD. By the time law enforcement hit the scene, it was suspected the man had left, but the show was then evacuated nevertheless, which SXSW director Roland Swenson says was a decision agreed upon by SXSW, APD, and the Music Hall's management.

Gun violence remained a concern the following night. Sixth Street was typically clogged with a human traffic jam of non-badge-holding loiterers when a series of gunshots caused a stampede. Police soon arrested two men, 22-year-old Rondarius Spicer and 20-year-old Justin Brunson, cousins who allegedly brandished their weapons because someone bumped into them.

Foreign dignitaries came in peace, fortunately: German experimentalists Faust disappointed with depleted troops making silly slop, Bombino conjured the north African desert with a Stratocaster, and young Euros captivated widespread attention – none more than Brit teen pop singer Låpsley and soul pop Danes Lukas Graham. A visit from Japan's greatest rock star had yours truly in awe, meanwhile, following a SXSW Film screening of documentary We Are X, detailing the fall and rise of Asia's glammy "v-rock" gods, whose homeland popularity in the Eighties and Nineties rendered Beatlemania paltry by comparison. X Japan's unbelievably true history includes their singer being brainwashed by a cult, two members dying by apparent suicide – causing fans to do the same – and persevering under the leadership of physically fragile drummer/composer Yoshiki, a musical genius haunted by his father's suicide, who has to get injections to get onstage.

After the credits rolled, Yoshiki appeared at the Paramount – his voice shaky with emotion.

"Watching this movie is painful, but at the same time it kind of gives me a positive feeling," he said before sitting down at a baby grand piano, backed by a string section, and performing emotionally charged classical renditions of Tchaikovsky, David Bowie, and X Japan. Later, he surprised Japan Night at Elysium with additional performances.

Backstage at Paramount, I asked him if SXSW was relatively moderate compared to the hysteria he causes in Japan.

"Being here, sometimes I enjoy going to the grocery store and buying blueberries, but it feels strange like, 'Hi, I'm here! It's me, Yoshiki!'"

Getting noticed in Austin is a goal for acts young and veteran, official and stealth. Burgeoning rock stars Cage the Elephant, for instance, played their only show during SXSW in the living room of an East Austin home for roughly 50 people. Among the higher-profile buzz artists that made the cut: dynamic drummer/singer/dancer/rapper Anderson .Paak's festival-ready fusion of R&B; teenage trio Sunflower Bean, who sound like a psych-rock Fugazi with clean vocals; UK electronic pop maestro Jack Garratt; lo-fi classic rockers Sheer Mag; and Madrid girl-group Hinds, who resemble a musically shaky amalgamation of the Vaselines and Black Lips. 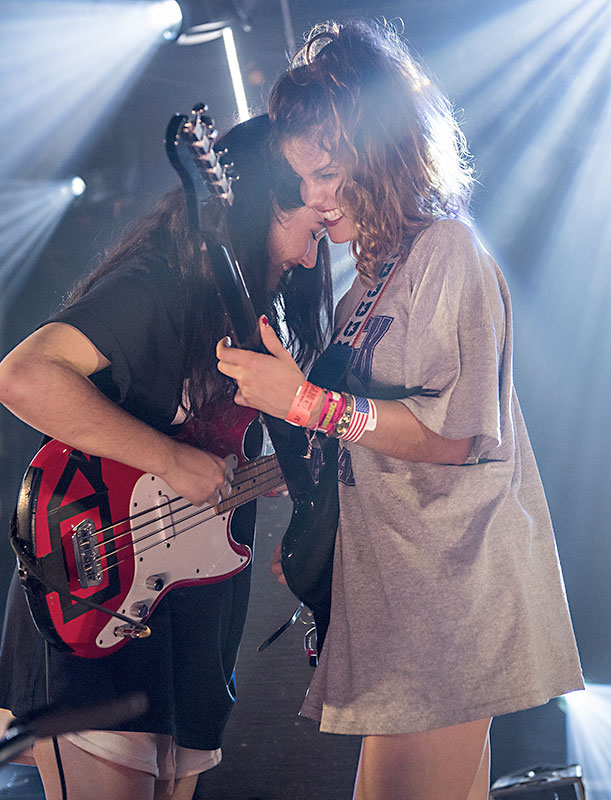 Hinds lived the quintessential buzz band experience at SXSW 2016, playing 17 shows over four days. It was a victory lap for the Spanish band who played 16 gigs at SXSW last year.

"The difference is there are more fans," said bassist Ade Martin minutes after playing a burger joint so packed that "Playback" had to stack up cinder blocks outside and watch through a window. "Last year it was all press, labels, and booking agents at our shows. Now we're set up, so we get people who know the songs and sing along."

As for the physical toll of playing four shows a day?

"It takes being very active and busy, and you can get sick," acknowledged Martin, cooling down with a margarita after a dehydrating set. "You have to love playing music and we do."

And now they're all gone: the superstars, the buzz bands, the international visitors, even the unlicensed open-carry enthusiasts. We're left with that same sad feeling that comes the day after you throw a big party: the fun's over, the crowd's gone home – time to vacuum the rug and pick up all the beer cans in the yard.

Each year, SXSW honors late Creative Director Brent Grulke with a series of prizes recognizing emerging talent and continued excellence. The three prizes, each including a $10,000 check, are voted on by music critics, industry professionals, and SXSW staff. Here are your 2016 winners: