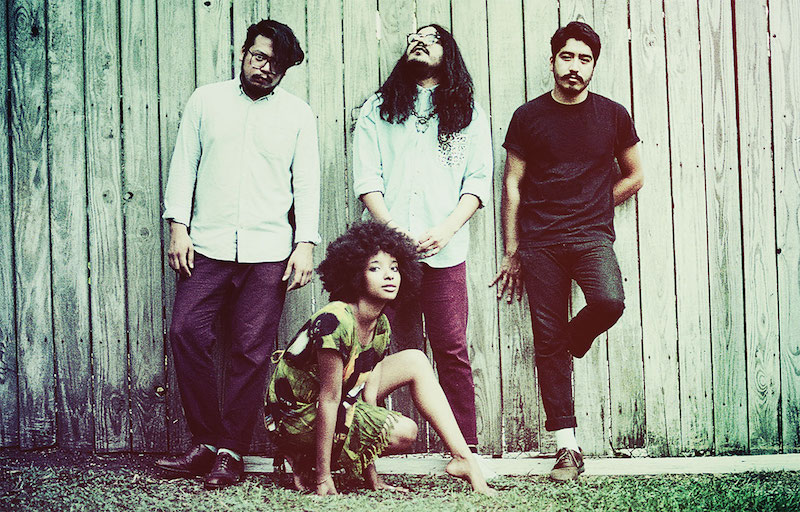 The Tontons (Photo by Julie Worsham/thetontons.com)

10pm, Swan Dive Patio
One of Houston's favorite bands, the Tontons remain a fivepiece led by dynamic frontwoman Asli Omar. Road warriors throughout the South, their brand of Texas rock struts and rumbles. They've been working on a follow-up to acclaimed 2014 release Make Out King and Other Stories of Love. – Jim Caligiuri

10pm, TenOak
Austin's Kay Odyssey summons the uncertain past with faraway vocal warbles and late-Eighties collegiate pop fuzz that recalls castaways like Antietam and Scrawl. Vocalist/guitarist Kristina Boswell weaves backhanded theatricality into her delivery, creating a slow-moving wave of emotion that ultimately becomes spellbinding on numbers like "Summer of Our Love" and "In Our Time." The quartet's 2015 full-length debut, Chimera, was an under-the-radar delight. – Greg Beets

10:15pm, Sidewinder Outside
Caveman recently announced its third LP, Otero War, and a spring tour supporting Glaswegians Frightened Rabbit. That should help keep them out of the "another Brooklyn band" category after a pair of 2011/2013 releases brought on a crush of accolades, then relative radio silence. Still, by hearkening back to Wilco, the indie rock purists have proved their might in a world that can't pinpoint "indie rock" anymore. – Abby Johnston

11:15pm, Barracuda
From Liverpool but hardly mop tops, Hooton Tennis Club welcome the uninitiated to the New Wave of British Power Pop! These four charmers behave like the only records worth owning were made entirely by Teenage Fan Club and Big Star, injecting melodic guitar crunch with a refreshing shot of candy-coated energy.– Tim Stegall

11:20pm, Speakeasy Kabaret
Michael Deni has a great origin story: He escaped New Jersey and bolted for San Francisco, found a synthesizer on the street (they're full of them!), and the rest is history. Still, Geographer, the project he created through synth exploration, has largely divorced itself from its native instrument on 2015 album Ghost Modern, relying instead on electronic programming and quirk. – Abby Johnston

12:05am, Mohawk Indoor
"Between the vacant homes are fancy doorbells wrapped with ribbon and bow," Christina Halladay snarls through the fuzz on "Fan the Flames," a call-to-arms for victims suffering at the hands of hellspawn landlords. Essentially all of the Philly band's two EPs are fight songs in some capacity, a bizarre but wonderful combination of cock-rock guitar riffs and messy punk challenging listeners to do better. – Libby Webster

1am, Dirty Dog
Talk about finding the missing piece: After a revolving roster of co- and lead vocalists, 2014's The Amanuensis put newcomer Chris Barretto front and center, adding an accessible sheen to 2012 debut Gnosis' Tool-like tendencies. Remembering the lesson that too may djent bands forget (write a song), the British avant-garde metallers could well fill the prog/pop gap left by Lostprophets' fall from grace.  – Richard Whittaker

1am, Maggie Mae's Gibson Room
Hailing from Belfast, Northern Ireland, this jagged post-punk quartet conjures a compelling mix of suspense and warmth on their third album, 2015's Arms Around a Vision. Despite starting life as a twopiece, their sonic pastiche aims for the nosebleed seats. A gift for the grandiose, they recall forebears like Roxy Music and Bauhaus.– Greg Beets

1am, Flamingo Cantina
These reggae-pop fusionists might be branded one-hit wonders after their 2013 summer jam had everyone asking why you gotta be so "Rude" like a Caribbean act even though they hail from Canada. On said rude LP, Don't Kill the Magic, they experiment blending post-punk riffs with ska, the outcome being strangely addictive and catchy.– María Núñez

1am, Friends
For old heads who argue there's not enough rapping in rap these days, let the Lytics be the antidote. A fivepiece hip-hop family from Winnipeg (two brothers, their cousin, and a pair of brothers from another mother), the Lytics invoke Nineties favorites like the Roots, Pharcyde, and De la Soul with catchy hooks and MCs stacking bars on bars on bars.– Thomas Fawcett