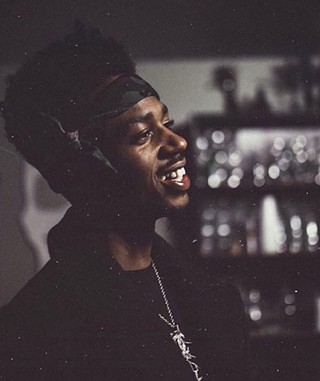 9pm, the Hideout
Co-founder of the indomitable Half Japanese, Jad Fair is inseparable from the evolution of lo-fi as both a musical assignation and philosophy. The 42-year-old band's latest, Perfect, wraps Austin-based Fair's unique skew around universal notions of romance and perseverance. His solo work includes collaborations with John Zorn, Moe Tucker, and Daniel Johnston. 1989's Fair/Johnston effort It's Spooky remains a high-water mark for both. – Greg Beets

10pm, Townsend
Pierogi by any other name, Justyna Swies and Kuba Karas have "taken Poland by storm," according to our Warsaw correspondent, taking home the Polish Grammy – the Fryderyk (as in Chopin) – for the duo's effervescent electro debut, 2014 Warner Music hit No Bad Days. November follow-up Sea You Later introduces rain to the rainbows, the instant comeliness of "Blue Flower" comparing to Beach House, only hookier. – Raoul Hernandez

10pm, Empire Garage
As a jazz drummer, Karriem Riggins has worked with everyone from Donald Byrd and Milt Jackson to Paul McCartney. As a hip-hop producer, the Detroit beatsmith has aided the likes of Erykah Badu, Slum Village, and Common. His Stones Throw debut Alone Together fuses 34 sublime short instrumentals. If you claim to love Dilla, don't miss Karriem Riggins. – Thomas Fawcett

10pm, Scoot Inn
Ninet Tayeb blips radar outside her native Israel due to her participation in former Porcupine Tree leader Steven Wilson's solo album Hand. Cannot. Erase. The widescreen rocker, who sings in both Hebrew and English, is four albums deep, with the most recent overseen by Arctic Monkeys producer Mike Crossey. She readies her fifth LP for world domination, preceded by the single "Child." – Michael Toland

10:45pm, Empire Garage
It's all a game for Angel Del Villar, the melodic Queens MC known as Homeboy Sandman, who stacks genius-level bars inside clever and conversational flows. Long a standout in New York's underground scene, he burst through with 2010's The Good Sun, then secured a deal with Stones Throw Records and unleashed a barrage of EPs and two strong full-lengths. Follow-up Kindness for Weakness is slated for May. – Kahron Spearman

11pm, Swan Dive Patio
The industrial apocalypse is upon us. One-man electronic inferno Tristan Shone, aka Author & Punisher, secures his position as the new Justin Broadrick with 2015's Melk en Honing, a swirling sandstorm that blends Skinny Puppy, Land of Rape and Honey-era Ministry, and Neurosis. Any survivors of this San Diegan's live show knows the unreplicated majesty of his self-engineered music machines, more locomotive than any store-bought instrument. – Richard Whittaker

12:30am, Cedar Street Courtyard
Born in the North Texas music haven of Denton, Snarky Puppy's eclectic jazz and funk-inflected compositions have now garnered a pair of Grammys as the outfit has become one of the most notable, if wide-ranging, troupes in contemporary music. Last year's exceptional collaboration with the Dutch Metropole Orkest, Sylva, topped Billboard's Jazz charts, while their new Family Dinner Vol. 2 LP runs an intoxicating gamut of global grooves. – Doug Freeman

1am, Cheer Up Charlies
Hard to believe Earth's Mightiest Soul Man Whose Name Isn't Charles Bradley is a pudgy white man born Sean Tillmann in 1978. Since his 1999 coming out as Har Mar Superstar, Tillmann's gone from mining the punk-driven electro path of Peaches to full-blown R&B powerhouse, complete with a horn section and the whole nine yards. New LP Best Summer Ever is a tour de force. – Tim Stegall

TBA
For his latest trick, Harlem's A$AP Rocky has picked up and moved to London, and assumed his rightful place as tastemaker/culture disruptor extraordinaire. Prior to such permanent jet-setting, "Pretty Flacko" put out Billboard No. 1 At.Long.Last.A$AP, one of 2015's best in any genre. The brash and flashy MC/A$AP Mob leader has taken on other business ventures, including fashion collaborations with Raf Simons and becoming the face of Guess Jeans. – Kahron Spearman

TBA, Stubb's
When he's not helping Kanye West get his shit together, Chicago's Chance the Rapper is quietly overthrowing the rap game. Lacing in just enough whimsy to make him completely relatable to even the hip-hop adverse, he's earned his cred through a shockingly long list of collaborations and his 2013 stunner Acid Rap. Little brother Taylor Bennett also showcases this SX. – Abby Johnston

TBA, Stubb's
Even if you're tangentially connected to today's rap scene, you've heard his production, and you've heard him before each track: "Metro Boomin want some more!" The 22-year-old trap wunderkind once known as Leland Wayne has made himself into one of the most desirable names in rap, producing tracks for Drake, Future, Kanye West, Nicki Minaj, and many more. In 2013, he released 19 & Boomin, his first solo project. Most recently, he was listed as executive producer for Drake and Future's What a Time to Be Alive mixtape. – Kahron Spearman

TBA, Barracuda Backyard
Oshun's recent performance at East Austin outpost Sahara Lounge was a revelation. The NYC duo of Niambi Sala and Thandiwe (both D.C. natives) mesmerized with a blend of soulful spiritualism and fly rhymes. The group's moniker pays homage to the Yoruba water goddess while their songs celebrate womanhood, blackness, mindfulness, and spirituality. Hard to believe neither of them is old enough to buy a beer. – Thomas Fawcett