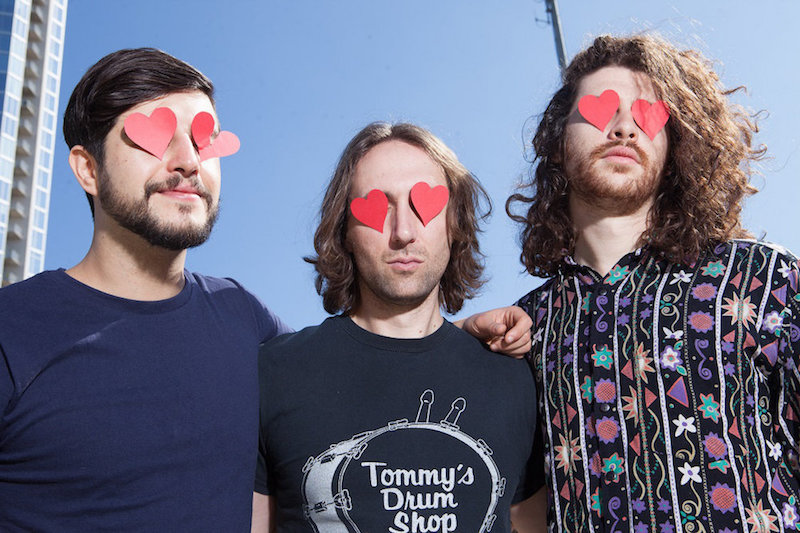 8pm, Hotel Vegas
Hum, first offering from this Amsterdam quartet, is a baker's dozen of sweetly warped pop songs that alternately comfort and displace. Daydreams of swaying bicycles and naps in the grass are dusted with subtle anxiety over missed connections and the aging process. Marina Tadic breathes unpredictable melodies with placid conviction, supported by the bobbing rhythm section of neo-psych-pop wizards from Jacco Gardner. – Sam Jacobson

8pm, St. David's Bethell Hall
Pronounced "Me Bubba," the duo of My Larsdotter and Bubba Tomasdottir combine for mesmerizing, ethereal tunes that twine their paired Icelandic and Swedish heritages into stirring harmonies. The sparse songs of upcoming sophomore album Big Bad Good, at times rippling with an almost Appalachian feel, unfold with an intimacy and earnestness that reflects being written and recorded live in the studio. – Doug Freeman

8:40pm, Swan Dive
Lil Debbie didn't choose the MC life; rap chose her. Or at least Kreayshawn chose her, and then Houston hot mess Riff Raff. However you look at it, the Oakland-born rapper was called out of the fashion world and into hip-hop, a journey that's produced five EPs and several tours, including an early 2016 European jaunt. Answer the call. – Abby Johnston

9pm, TenOak
Local trio Buhu attaches a lot of meaning to its January LP debut, Relationshapes. Now, whether the electronic pop can really unlock the intricacies of our connection to the world around us, ultimately delivering you to a state of higher consciousness, is up for debate. What we can definitively say, however, is that the band has a lot of fun getting there, and you will, too. – Abby Johnston

9:05pm, PromiseLand Church
Veritable ATX underground rap legend Bavu Blakes takes a break from improving the lives of homegrown youth to demonstrate how he came to prominence as the self-proclaimed "Scholar Emcee." Recently heard on arguably his best track "Who Can You Trust?" off the standout Wyld Gentlemen, he remains a schoolteacher and graduate student. New project Soul Force drops this year. – Kahron Spearman

9pm, Parish
Americana-tinged indie with both pop and folk sensibilities, Bee Caves is an introspective, locally sourced band. Six-track debut, Animals With Religion, runs the gamut of music, with foot-tapping opener "Running Home to You" toting a Fiona Apple piano line, the title track and "Heaven and the Come Down" skewing electronica, and melancholy closer "Orion" a sparse, echoing ballad. A mixed bag musically, but tight across the board. – Libby Webster

9pm, Barracuda Backyard
Doesn't take a lot of time to tell people how much you don't give a fuck. Self-described as "stonerpunk," Providence, Rhode Island's Gymshorts knock out brief, brash songs, equal parts bratty and punk ("Hey Parents!" refrains "I just wanna be bad!"). Cutting their teeth in the gritty DIY scene of New England, they stay true to their garage roots. (Also: Thu., 12:35am, Maggie Mae's Rooftop) – Libby Webster

9:15pm, Hotel Vegas at Volstead
Formed by ex-OBN IIIs guitarist Jason Smith in 2012, this tightly wound local trio translates the relentless drive of Smith's former band to the power-pop rubric. They tear through scruffy bop rockers with outsider yearning but never abandon faith in the transformative power of transistor melodies. Their 2014 debut, Put Together, on local Matador co-owner Gerard Cosloy's 12XU imprint, spools forth like a compilation of misplaced gems from Greg Shaw's estate. – Greg Beets

10pm, Icenhauer's
Lyrics take a backseat in this driving, atmospheric sphere of psych. Vocals float in and out, droning, often buried by the psychedelic tangle of spacey guitars and thrumming basslines. Hailing from Norway, Electric Eye only has two albums, but songs tend to run longer, each track a self-contained, hazy journey – although the destinations aren't clear. – Libby Webster

11pm, Saxon Pub
Originally part of the San Diego scene where she occasionally joins former baseball player Tim Flannery's band, Barbara Nesbitt has called Austin home since 2011 and become a fixture locally through her co-fronting hard-hitting country in the Whiskey Sisters and as a mesmerizing solo artist. She's currently crowdfunding for a new recording and will be touring the UK this summer. – Jim Caligiuri

11pm, Clive Bar
Familiar story: find a remote wilderness cabin, convert to studio, record folk album. For Jonathan Clay and Zach Chance, the result paid off on Jamestown Revival's 2014 debut LP, Utah. The Austin band hit the mark with an infectious roots sound and harmonies that fall into the lineage of young bands like Houndmouth or the Lumineers, and explodes into wild and raucous live sets. – Doug Freeman

11pm, Javelina
Sure, Austin's homegrown psych scene is a burgeoning, beautiful clusterfuck, but it turns out Holland can levitate, too. Foursome Pauw put out its tight, trippy debut, Macrocosm Microcosm, last October, a mash-up of modern-day psychedelia. Guitar lines reminiscent of Tame Impala, hovering vox in line with La Luz, and a throwback dash of 13th Floor Elevators electrify the aesthetic. – Libby Webster

11pm, Easy Tiger
After taking a break from albums proper to create an award-winning video game score for Max Payne 3, Los Angeles quartet Health returned to Loma Vista with Death Magic, which released in August 2015. The aim, according to the band, was to create something "bigger" than they had ever done before, and with an already established apocalyptic electro-beat, brace yourself for a speaker-buster. – Abby Johnston

11:05pm, Monster Energy Outbreak House
Boogie isn't an outspoken, political rhymesayer like his Compton counterparts. In Thirst 48 and The Reach, Boogie emerged as a lighthearted wallflower with an oddball lisp that felt authentic and unassuming. If you scratch the surface beneath Boogie's simplistic and plainspoken lyricism, you'll find poignant commentaries on cyclical violence in "Further," and broken family values in "God's Work." – Alejandra Ramirez

12mid, Russian House
Austin's foremost importers of global sounds cover serious geography. Atash moves from Iranian bandari to French gypsy jazz and many points in between. Chalk it up to the collective's diversified proficiencies and an all-embodying philosophy toward their mission that has little use for borders. Mohammad Firoozi's mesmerizing vocals will change your brain chemistry. – Greg Beets

12mid, Friends
Dearly Beloved introduced itself to American audiences touring with Swervedriver, blasting psych-rock stoner punk at full volume. That blend took the Canadians to Joshua Tree and the same studio in which Queens of the Stone Age works, the result being the band's latest album, Enduro. Leaders Rob Higgins and Niva Chow lay their hearts (and bodies) on the line at every show. – Michael Toland

1am, Tellers
Returned to Austin after the breakup of his band the Low Lows, Monk Parker unloaded his solo debut in late 2015 – three years and 30 musicians in the making. Haunting and delicate, How the Spark Loves the Tinder at times recalls the brutally devastating lull of former outfit Parker & Lily in the slowly unfolding pockets and sighs of regret. – Doug Freeman