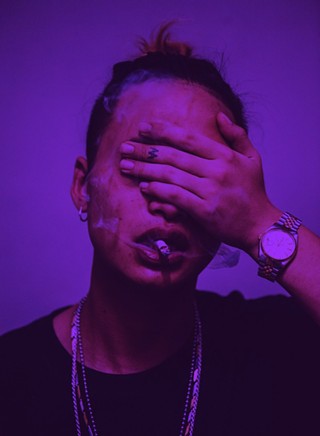 8pm, SXSW Outdoor Stage at Lady Bird Lake
This year's big show out in the elements comes headlined by the New York quartet that made it cool for '00 kids with floppy hair and black clothes to dream of Rob Tyner-style afros and buy used Rush LPs. Always the most prog-influenced of all the emo bands, Coheed & Cambria's eighth studio LP, October's The Color Before the Sun, shocked all by arriving conceptually naked – as in none at all. Live, they rock like Thin Lizzy. – Tim Stegall

8pm, Antone's
One of the beauties of SXSW is the opportunity to see legendary acts in relatively intimate confines. The now 74-year-old George Clinton is a true American original and funk pioneer who can tear the roof off the sucka. It's not the acid-fueled Seventies heyday of Parliament-Funkadelic, but they still slow-cook a crowd into communal ecstatic groove. Free your mind and your ass will follow. – Thomas Fawcett

8pm, Russian House
Performing Mugham, the region's indigenous music, Azerbaijan's finest musical export utilizes the tar (a lute), bowed kamancha, and naghara drum in moving from almost Celtic cadences to Middle Eastern music. Bandleader Agil Suleymanov, 23, employs a universal tenor to bridge the language gap, while the modality of the instrumentalism hypnotizes. The quartet's spent time at the Butler School of Music at the University of Texas teaching and performing. – Michael Toland

Echo Wants Her Voice Back

10pm, Mohawk Outdoor
When You Walk a Long Distance You Are Tired, Mothers' quiet 2016 debut, is weighted by careful string arrangements. Airy, bittersweet indie, the Athens, Ga., foursome's sound is a gentle, personal endeavor. "I was a napkin in the rain," croons Kristine Leschper in her peculiar, wavering voice on "Lockjaw," later adding, "You love me mostly when I'm leaving, I was half-gone when you met me." (Also: Wed., 9pm, Clive Bar) – Libby Webster

10pm, Latitude 30
Hælos Full Circle (Matador) compiles the remnants of London trip-hop and ups the groove considerably, thanks in no small part to the triptych of heavenly vocals from bandmates Lotti Benardout, Arthur Delaney, and Dom Goldsmith. They're less Massive Attack and more dancier Portishead, for those inclined to pigeonhole. Single "Dust" sounds alternately like a desert prayer and a megalopolis lullaby, with spartan, ethereal electronica matching Benardout's mesmerizing vox. – Marc Savlov

10:30pm, Hotel Vegas Patio
Austin's preeminent garage-punk crew has spent the last two years moving out of the garage and into the arena – at least sonically. Both vinyl-only scorchers Third Time to Harm and Worth a Lot of Money have seen band namesake and local polymath Orville Bateman Neeley III dusting off his Blue Öyster Cult and Thin Lizzy records and feeling those more than the Stooges. He fucks shit up live. – Tim Stegall

11pm, St. David's Bethell Hall
Among a handful of Austin songwriting veterans whose craft distinguishes time and again, Fracasso's gifted a voice putting him among the 1%. The native New Yorker's storytelling enjoys economy of scale and his high, delicate tenor puts it across with hushed reverence. Also known as a gourmet Italian cook who offers unique dinner concerts, he readies his eighth opus, Here Come the Savages, for April. – Jim Caligiuri

11pm, Stubb's
Was that UK pop wunderkind Charli XCX in the front room of (now) Sidewinder a few SXs back, karaoking to a couple dozen curios? Today, at 23, she's enjoyed a plethora of singles including "I Love It," "Boom Clap," and Selena Gomez's chart-topper "Same Old Love," and released two critically acclaimed albums. She was recently in the studio with Sophie, producer of Madonna and Le1f, for her most recent effort, the Vroom Vroom EP. – Alejandra Ramirez

11pm, Friends
Despite their slow rise to pseudo-stardom, the Zolas aren't wearing rose-colored glasses. On this year's third full-length Swooner, the Vancouver duo of Zachary Gray and Tom Dobrzanski describe the disc as the moment you step outside of a party to take a smoke break. Translation: Nineties moody grooves nailing signature dreamy and upbeat experimental pop. – María Núñez

12mid, Esther's Follies
Outlet for Austin singer-songwriter Jeff Klein, who originally drew attention for restive songcraft in the Mark Kozelek vein, My Jerusalem began as something of an offshoot of the Twilight Singers, Gutter Twins, and Polyphonic Spree. 2013 sophomore album Preachers proved a peak, cinematic yet pensive post-punk best experienced loud. The foursome toured with the like-minded Peter Murphy and are now gearing up for their third full-length this summer. – Jim Caligiuri

12mid, Continental Club
Single-handedly keeping outlaw country alive at a time when Shooter Jennings was still in high school, Jesse Dayton spent part of the past year subbing for Billy Zoom in X as he battled cancer. Both actor and soundtracker for Rob Zombie (Halloween II), Dayton wrote and directed 2013's gory Zombex. He zips back to town long enough to remind us what he does best: hard country with punk overdrive. – Tim Stegall

12mid, Clive Bar
Seattle's the Head & the Heart make indie folk fit for the campfire set, their six years on the scene feeling more like a decade thanks to genuine connection with a growing, youthful demographic. Belt along to their heart-filled anthems, sure, but Jonathan Russell, Josiah Johnson, and Charity Thielen's booming vocals power their own choir. Their two albums overflow with both joy and newfound sadness. – María Núñez

12mid, Banger's
Aaron Behrens and Thomas Turner's analog explosion project Ghostland Observatory remains singular in EDM. The former's psych-rock influence and striking shriek melds perfectly with Turner's synth-funk productions to create an otherworldly experience in minimal electronic, maximum pulse-pop. Even with only the two Austinites onstage, and one of them behind the keys, they decimate stages with laser beams and beats. – María Núñez

12:20am, Monster Energy Outbreak House
International hip-hop spotlights Korean trap rapper Keith Ape, bleach-blond locks, good teeth, and all. The Cohort Crew MC made history with hit single "It G Ma," which translates as "don't forget," a fusion of Southern trap and Japanese/Korean lyricism. The track borrows heavily from OG Maco's "U Guessed It" and offers IDGAF swag, Ape becoming one of the rowdiest live shows around. – Kahron Spearman

1am, Esther's Follies
A founding member of Magazine and Nick Cave's Bad Seeds, UK multi-instrumentalist Barry Adamson went solo in the late Eighties with the now-seminal Moss Side Story, soundtrack to a nonextant film. Seven more soundscaped albums followed – jazz, funk, electro, dub – and now he writes and directs his own movies and legitimate movie scores. His ninth solo album, Know Where to Run, arrives this year. – Michael Toland

TBA
One of the ultimate grinding-to-success stories, 2 Chainz (Tauheed Epps) found his way to the top of the charts via some of the most irreverent songs in rap history. After signing a solo deal with Def Jam, changing his stage name, and creating an alliance with Kanye West, the hardest-working man in rap received the success he's earned. The Felt Like Cappin EP appeared in late January, and ColleGrove, a collaborative effort with Lil Wayne, dropped March 4. – Kahron Spearman

TBA, Maggie Mae's Rooftop
One of a half-dozen Marley children carrying the musical torch of their pioneering father, Ky-Mani is the son of Bob and Jamaican table tennis champion Anita Belnavis. Rasta leans more toward the hip-hop-infused dancehall of brother Damian than the strictly roots vibes of Julian, Stephen, and Ziggy. He celebrates "Mary Jane" on sixth LP Maestro and pleads for peace alongside Damian on "Keepers of the Light." – Thomas Fawcett