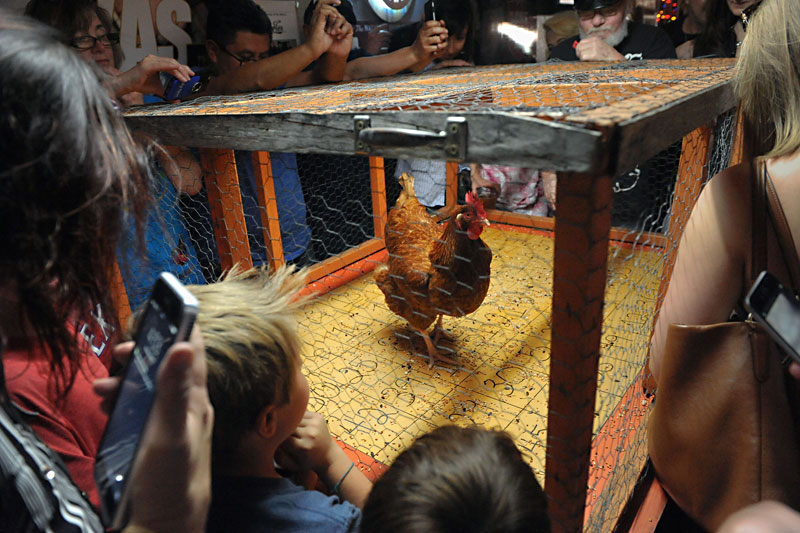 B-I-N-G-O: Ginny the chicken at the LIttle Longhorn (Photo by John Anderson)

How you spend your Sunday is your business. Some folks go to church, some go to brunch, and others like to crowd around a chicken-wire cage with a ticket in hand, hoping a hen drops a wet one on their number. Welcome to Chicken Shit Bingo, a curious local tradition, where you bet on bird turds while eating free hot dogs and listening to country music.

Country crooner Dale Watson, who'd witnessed the poultry parallel of a traditional "cow drop" in California, hatched the event locally in 2000 at the Little Longhorn Saloon.

"We really thought it would be a novelty thing, maybe good for a couple months and wear off," Watson admits. "Of course that was 16 years ago."

Recently, some Austinites have had their feathers ruffled by Watson flying the coop, leaving the Burnet Road saloon and starting a competing Chicken Shit Bingo at C-Boy's Heart & Soul on South Congress. Watson confirms he's sold his share of the North Austin tavern: "It was becoming more of a family business, so I said, 'Y'all got this' and let it go," says the singer, who also holds a Chicken Shit Bingo at his Big T Roadhouse in St. Hedwig.

As a result, for the past two Sundays, there's been rival Chicken Shit Bingos in Austin – North vs. South.

"Oh there's room for two Chicken Shit Bingos in Austin," he declares. "South Austin and North Austin are like two different cities nowadays. Trying to get people to cross the river is hard. The main comment we've gotten at C-Boy's was people saying, 'I've always wanted to go to this. Now it's close to my house, so I can.'"

"The Little Longhorn is the original home of Chicken Shit Sundays. That's what everyone knows it by, and you can't take that away from such a beautiful bar," says Gaona, who's related to Watson and purchased the Longhorn from iconic owner Ginny Kalmbach. "We're trying to keep a tradition alive, and we are ecstatic to have the blessing of Ginny."

Actually, Watson's got Kalmbach hosting the C-Boy's event and, while both sides downplay any competition, there's obvious oneupmanship at work. Each has its assets and distinctions: Little Longhorn has the kitschy location, a stable of performers including the Jason Roberts Band, and two chickens: Ginny and Batman. C-Boy's boasts Watson, Kalmbach, three chickens – Little Ginny, Loretta, and Patsy – and, according to Watson, a slight food variation: "Since Steve Wertheimer owns C-Boy's, the hot dogs had to be kosher."

Next week, Dale records his C-Boy's performance for an upcoming Live at Chicken Shit Sunday disc. Later this year, he's taking CSB on the road for a national tour with half of each bingo pot going to charity.

Air Force One swoops into Austin Friday, delivering South by Southwest's most important headliner ever. President Barack Obama kicks off the SXSW Interactive conference on Friday with a keynote conversation, then sticks around for a DNC fundraiser at the Austin Music Hall. When the Commander-in-Chief visited Austin in 2014, he skipped the line at Franklin Barbecue, upping the brisket haven's already sky-high reputation. What if this time, Barry-0 catches the spirit of SXSW and enjoys some Austin music tourism? Here are my recommendations:

There's no higher honor in Austin music than blazing a fat J on the tour bus of country music's Dalai Lama, in town this weekend to open Rodeo Austin on Saturday. Some Maui Waui for the two men with Hawaii connections? Obama has intimated that federal marijuana reform isn't one of his end-of-term priorities, but maybe Nelson can change his mind.

Imagine the retweets Obama's @POTUS account will get when a picture of him standing in front of Daniel Johnston's iconic "Hi, How Are You?" mural gets posted. And like Twisted Willie, the muralist will be in town this weekend (see "Music Listings," p.70). #MyAdministrationRecentlyProposedA $500MillionInvestmentToIncrease AccessToMentalHealthCare

Obama's showcased his dance moves on Ellen, but his only hope in turning Texas blue comes after learning the regional moves. I suspect he probably looks good in a pearl snap shirt and cowboy hat.

Pose for a Tim Kerr Painting

The Big Boys guitarist and DIY artist has continued to use civil rights icons as subject matter in his unique portraits, often painted on non-traditional palettes with non-realistic colors. We'd love to see a purple-skinned likeness of America's first black president on a skateboard deck. 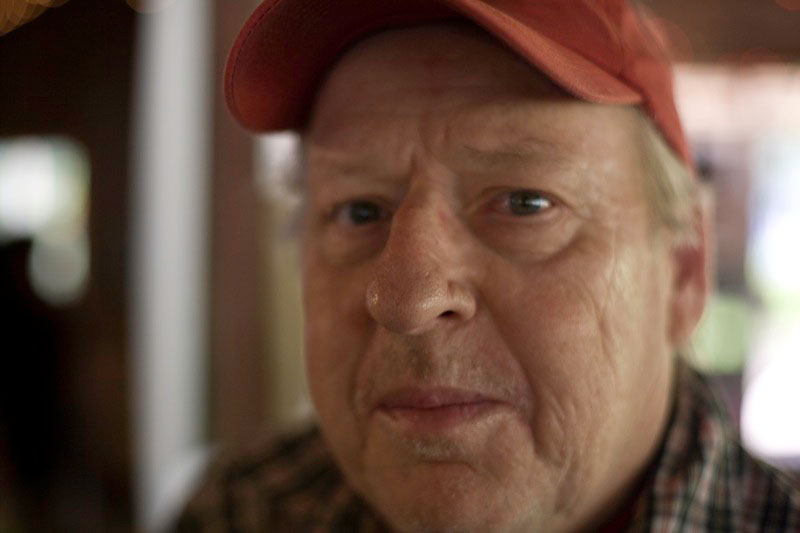 Music writer emeritus John Morthland was found dead from natural causes in his home in Austin on Tuesday. His career began in the Sixties when he was the first American journalist to interview the Rolling Stones. He went on to write for Rolling Stone, edit Creem, and author The Best of Country Music. A Chicago native, he was instrumental in shaping SXSW as the conference's first music panel discussion organizer and later wrote for Texas Monthly. Morthland also served as literary executor for the estate of his deceased friend Lester Bangs. He was 68.

The community came together on Monday night to honor the behind-the-scenes heroes at the Austin Music Industry Awards. We laughed with Mayor Steve Adler, who ribbed the losers ("This confirms your deepest fears of inadequacy"), cried with Continental Club gatekeeper Dianne Scott during her touching acceptance speech, and took pleasure in the irony of one of Austin's oldest clubs – Antone's – winning Best New Club. You voted, we merely counted. Here are your 2016 Industry Award recipients: