Return to Austin High might have been the most important set at the Austin Music Awards since the Big Boys shared the bill with the Fabulous Thunderbirds at the second-ever Austin prom – Thursday, March 8, 1984. Last year's AMA centerpiece, a reunion of next-generation live music natives – Gary Clark Jr., Eve Monsees, Shakey Graves, Warren Hood, etc. – not only sold out the Convention Center ballroom with scores of future Austin High alma maters and materettes sitting in the aisles and shouting out their tribe, it pointed the hometown scene both forward and backward. Future, past, commingling.

When Texas welcomed back Willie Nelson in the Seventies, hosting his picnics statewide, the notion of genre more or less hopped the first stagecoach outta Dodge. 13th Floor Elevators, Doug Sahm, Butthole Surfers: categories unto themselves revered universally and never more so than here in our vast Lone Star nation under God. Think Waterloo Records, organized alphabetically rather than by niche: ...And You Will Know Us by the Trail of Dead to Zeale, Angélique Kidjo to Zap Mama, Asleep at the Wheel to ZZ Top.

Cowboy hats, mohawks, Christeene – this is a right to identity Republic as long as you live in Austin. The only politics in this town happen onstage, through a PA, and with the merch table in back by the door. Be who you wanna be, because two-step or mosh, we all march to the beat of the same drummers: Lisa Pankratz, Brannen Temple, Chris Layton, Conrad Choucroun.

And yet in the year of Ronald "Bonzo" Reagan's re-election – remember, conspirators, John Lennon was martyred a month after the California governor's initial presidential landslide in 1980 – the philosophical divide between the T-Birds and Big Boys might have measured the same miles and miles of Tejas between Lubbock and Brownsville. That latter act, Austin's Clash to the Dicks' Sex Pistols, broke up that same year, while the former toughs celebrated a decade together on their way to MTV and 1 million units shucked in 1986's Tuff Enuff. One band rode skateboards, the other a steel horse.

Blues' local bad boys arrived mostly too late for the Eastside's Chitlin Circuit even while hauling its bedrock mania back across the railroad tracks to the still dirty heart of Sixth Street. Surface-wise, their counterpart punks represented a spontaneous, anti-mainstream alternative to such musical patriarchy, only their hardcore funk accents grew from the same root source their greater movement sought to overthrow. The T-Birds soon matriculated to a higher school after that didn't happen, shaking the velvet dust/rust/must of this sleepy little town off their boots, whose imprint then overflowed with Stevie Ray Vaughan.

Return to Austin High at the 2014/15 AMAs embodied both (not so) extremes: a new hierarchy, a ticket to the big leagues, and new scene bosses perhaps not so different from the powers that be. Gary Clark Jr. – Vaughan approved. Shakey Graves: Steve Earle for the iGener­a­tion. Bob Wills would've hired Warren Hood on the spot.

Warren Hood singeing the horsehairs of his fiddle bow during Return to Austin High made at least one rookie booker in about the 15th row sit up like they'd thrown the switch to the electric chair and mouth the words Johnny Gimble. Guitarists spew forth from this soil same as another natural resource, but the devil that went down to Georgia was merely whistling Dixie if he didn't come here looking for fiddlers to soundtrack our nation's democracy going to hell. That night, Western swing's neckerchief, Gimble (May 30, 1926 – May 9, 2015), hadn't reached the heavenly bandstand yet, but his spirit wafted through Hood.

"Another local fiddler is Carrie Rodri­guez," emailed Hood recently, just days after he and his wife welcomed Hyatt DesChamps Hood into this world. "Carrie was born and raised in Austin and went to Austin High and Berklee, and we both grew up with the same violin teacher."

Prompted for other blazing bows to draft for the AMA bonfire – former Asleep at the Wheel saw horse Jason Roberts, outlaw Alvin Crow, and the Albert Einstein of Austin violin, Erik Hokkanen – Hood pointed out an unseemly tear in Austin's musical fabric: He and his fellow Berklee attendee had never duetted. Correction forthcoming – one spearheaded in part by former Warren Hood Band mate Emily Gimble, granddaughter of Johnny, and current Asleep at the Wheel ivory tickler.

Upon hearing the fiddles pitch, the fellow seated next to me at the AMA idea symposium promptly dominoed into this year's winner of the Return to Austin High follow-up, Freaks & Geeks. A half-dozen Blazing Bows? Try the return of the Duke Ellington and Count Basie orchestras once squaring off on the same bandstand ("Battle Royal"), only this time it's a reincarnation of the Sun Ra Arkestra pitted against DIY Austin's philharmonic.

Golden Dawn Arkestra makes Ali Baba & the 40 Thieves look like Shriners, Afrobeat jazz and funk for the Freak set. Mother Falcon, for its part, preys on mere indie pop acts nesting on the ground solely with drums, bass, and guitar with orchestral brainiac fortitude. At 15 members each, their first-time face-off at the AMAs could collapse the stage. And all of it as refereed by Brown Whörnet/Golden Hornet Project composer Peter Stopschinski and actual v-i-o-l-i-n-i-s-t Jenavieve Varga changing the tires on Dicks' standard "Wheelchair Epidemic." Geek out, ATX.

Not to be outdone, AMAs bandleader for a second (thank the music gods) year, Charlie Sexton, just happened to have cut a stardusted David Bowie tribute months before that luminous sphere imploded. On "Moonage Day­dream," Bob Dylan's guitarist anticipated, encapsulated, summated 2016, so much so, in fact, that Spoon's Britt Daniel himself volunteered to share the mic. Sexton's fellow Arc Angel Doyle Bramhall II, covering ZZ Top cover "I Thank You" on the same Friends of SIMS benefit CD, rightly decided more equals merrier.

His squeeze Renée Zellweger will emcee.

Which brings us right back to the beginning: T-Birds original Strat massacre Jimmie Vaughan leading a tribute to Austin's resurrected Home of the Blues, Antone's. New Orleans scion C.J. Chenier, whose father Clifton Chenier christened Clifford Antone's original stage, Southpaw six-stringer Barbara Lynn, and queen blues Lou Ann Barton join the chorus, one that will then step forward to doo-wop for the true sound of our town, beloved KUTX Twine Time deejay and AMAs emcee of decades, Paul Ray. What's in store there?

Locked in as of this writing, brace yourselves for a special guest even more famous than the two most outsized surprise appearances – Bruce Springsteen and Pete Townshend – in 33 previous years of Austin Music Awards. 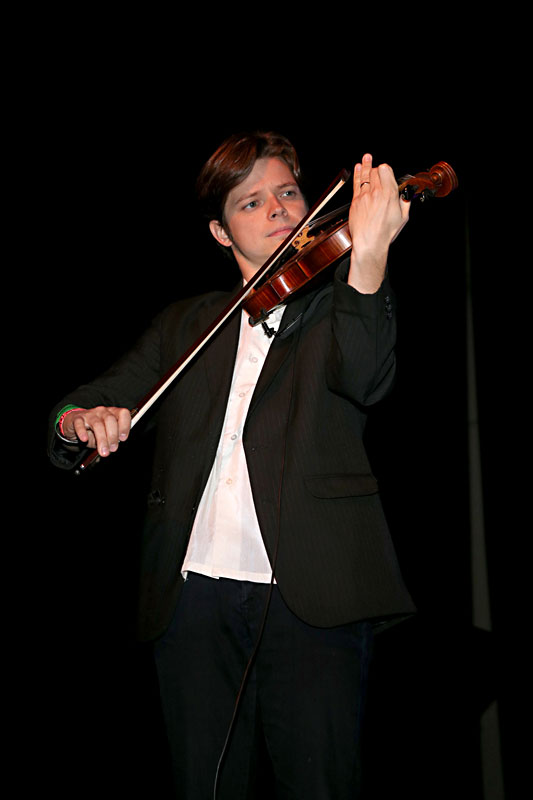