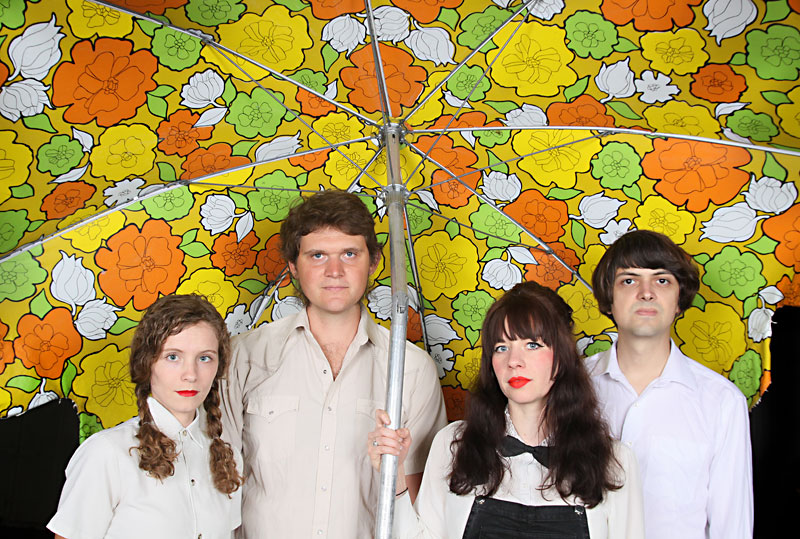 "He's the only one who can handle the sun," smirks keyboardist Sarah La Puerta. "The rest of us are vampires."

Austin natives save for Sacramento-bred singer Natalie "Ribbons" Gordon, the local quartet formed, posthaste, from the ashes of former bands. Gordon fronted Agent Ribbons, while Simon plus guitarist Jason Chronis were in Voxtrot.

"Our first show was an official South by Southwest showcase," recalls the singer. "We'd only been playing together for two weeks." The frontwoman's erstwhile group was originally booked to headline a 2013 Antenna Farm showcase, but the duo disbanded before the festival. "The booker was like, 'Nope,'" she mimics, finger wagging. "'You'd better come up with something!'"

The foursome's debut recording dropped the following year via EP Cosmic Dial Tone. Then their cover of the Velvet Underground's "Stephanie Says" landed on American Laundromat's I Saved Latin! A Tribute to Wes Anderson comp. Recently, the group wrapped recording of their first full-length. Currently shopping that finished product to labels, they're utilizing the March megafest to their advantage.

"Our expectations for South by Southwest are different this year," notes Gordon. "We're curious whether these labels we've been communicating with will actually come investigate us, or if they'll just get drunk and attend all the 'obvious' shows."

Tele Novella's timekeeper calls the unnamed album "dark and whimsical." The frontwoman fine-tunes: "It's melodic, macabre-pop." Gordon's the band's chief songwriter, and her presence conveys as much. She's assertive and thoughtful, her mod sunglasses and sock-hop ready curls suiting the group's Sixties vibe. Atop pouty alto vocals and surf-rock guitars, the band sounds sugary but sinister – a Ventures/Paris Sisters hybrid.

"I write a lot of disjointed, strangely set-up songs," says Gordon. "Next, though, I'd like to try starting with rhythm instead of lyrics. Focus more on a song's feeling."

Having begun fast, they haven't slowed.

"We came out of the gate ... what's that expression?" pauses the singer.

"We came out swinging, our gates ablaze."