A No Idea Festival exploratory

This weekend, Austin's No Idea Festival once again fuses aural experimentalists and improvisers from a range of backgrounds and geographies throughout spaces around town, with a final day in Houston. Residing both locally and in Mexico City, Chris Cogburn set out to bridge the gap between Houston and Austin artists in 2003. Thirteen years later, the bridge doesn't merely cross the U.S./Mexican frontera, but rather a network of international and local improvisers seeks to broaden the festival's original intent of deconstructing boundaries and borders. Despite a tightly knit local experimental community, Austin's oasis outpost hasn't always pulled in that sect. The No Idea Festival remains one time a year to experience the overlap and interplay of everything from phenological sound art to avant jazz and microtonal composition. "Though rooted in a specific field of work, each artist's interest propels them into other, often unknown territories," offers Cogburn via email. "This foregrounding the ability to move through musical forms is what connects the artists – as opposed to sharing a specific interest in a pre-articulated form or genre. It's going to be wild style. The breadth of musical ground covered this year should be pretty radical." Full schedule: www.noideafestival.com.

Fielder will be joined by Norwegian reedist Frode Gjerstad and Houston double bassist Damon Smith for the festival's opening set, Thursday, February 25, at the Museum of Human Achievement (located at Lyons and Springdale). He's back at the same venue on Saturday in a quartet with Gjerstad, Brooklyn-based guitarist Ava Mendoza, and Austin's double bassist from Norway, Ingebrigt Håker Flaten.

Jerman also performs today, Thursday, and Friday at the MOHA alongside Tim Barnes, a percussionist who's worked with Sonic Youth and the Silver Jews. The live electro-acoustic set will be the duo's first in Texas, spotlighting their release Versatile Ambience on Idea Intermedia. On Sunday, Jerman appears at the Blanton Museum of Art in a SoundSpace organized by local trombonist Steve Parker, performing with Texas-based experimentalist Steve Jansen at the museum's Summer Circle art installation. AC: Please introduce and describe your work and process.

JJ: My practice centers on listening, and the work itself takes many forms. I spend a fair amount of time walking around the desert that abuts our small town [Cottonwood, Ariz.], trying to pay attention. I often make recordings of decaying structures or detritus – old buildings or service structures, dead cars, fences, garbage – using a variety of devices. I may use these recordings later on, or just listen to them.

Currently I'm working on some stuff for a new Jerman/Barnes tape that incorporates recordings of leaves falling off the trees in my yard, a chain-link fence in the wind, rubbing my hand over a drum head, and driving down a rough mountain road with a box full of broken TV glass in the back of my car. I occasionally write loose, long-form pieces for large ensembles using found objects (stones, wood, pot lids, etc.), and I do a fair amount of improvising when the occasion arises.

Being so isolated here, it doesn't often arise. I'm also interested in how analog tape degrades.

AC: You've lived and worked throughout different locations – Arizona, Colorado Springs, and Seattle, to name a few. How does each place contribute to your art? Do you choose to live in places that specifically flow into your work?

JJ: For a large portion of my life I didn't choose where I lived. I've wanted to move back to the desert ever since I lived in Phoenix in the Seventies, mostly because I feel better here than anywhere else. I like the weather, and I can see the horizon. It's difficult to say how different places contribute to what I do, besides the fact that each offers different kinds of sounding spaces. And each offers different groups of people to work with. Perhaps this, along with whatever job situation I have to accept, influences things more. I seem to think about and work with similar ideas wherever I am. AC: What are your thoughts on the term "jazz"?

AF: The root word, jazzae, is East African. It means to speed up. However, when it got to America, it was called jass. It's just a descriptor. Some people call it black classical music or America's classical music. I still use the word, although I don't use it around certain musicians. The word was brought here during slavery, and I'm sure it was misconstrued. The slaves probably pronounced it differently. They used it in the field hollers to speed up something. This music is the only fine art formed in the late 19th and early 20th centuries. The blues are a folk art. Jazz is a fine art, the same as European classical music, ballet, and painting.

AC: Your drumming balances traditional jazz styles, while also stretching out into new directions that have come to be identified with free jazz. Please speak about maintaining this balance.

AF: I was born in 1935, so the first drummer who influenced me was Max Roach. I was just so fascinated by him. Then in 1951, I went to New Orleans and ran into Ed Blackwell. I wanted to study with him. He was also a Max Roach enthusiast. Max was still in New Orleans. So at first I was enthused by bebop, until I got mixed up with the New Music in Muhal Abrams' group. One day Roscoe Mitchell played with us. Roscoe played so loose. My playing changed that particular night. I don't know why. I don't know how. It just loosed me up. From that moment on, I was playing a looser music. Not as loose as, say, drummers like Sonny Murray or Milford Graves, so I then incorporated their style of playing into my vocabulary. And I've always been able to play with bebop musicians and looser musicians. I heard Sunny Murray playing with Albert Ayler on Spiritual Unity and that was it. The guys just stick in your mind.

AC: Tell us about your time with the AACM.

AF: When I joined the AACM, I just got back from Denver, Colorado. I ran into Muhal and started working in his group. The AACM was a group of organized musicians who sponsored concerts and played music written by themselves, instead of stuff written by Charlie Parker, John Coltrane, Sonny Rollins, and so forth.

AC: How did you usher a Southern context into this New Music, which we generally associate with Chicago and New York?

AF: I moved back to Mississippi from Chicago to take over my daddy's drug shop and become a pharmacist. I didn't want to come back. During that particular time, I was working with Anthony Braxton and quite a few people. But my father took ill. When I came back, he got a lot better and lived to be 99. I think he fooled me back home.

In Mississippi, I ran into a fellow by the name of John Reese. He lived out in Oakland. He had a nonprofit group called Black Arts Music Society. I met him when I moved back here. John was a very forward-thinking guy. He got funding from various sources: National Endowment for the Arts, the Mississippi Arts Commission. John was bringing in people like Dexter Gordon, Woody Shaw, and all these people. When I met him, he allowed me to bring in guys from the AACM. We were bringing in someone every month. It was through the Black Arts Music Society that we started bringing in everyone. We were doing things in public schools and colleges. 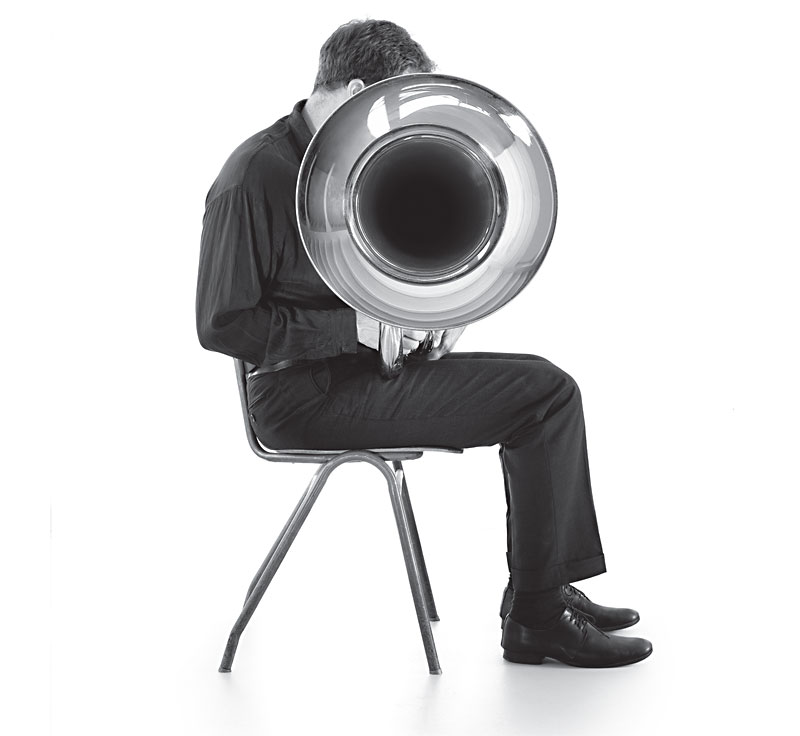 Robin Hayward is a microtonal tubaist born in the UK and based in Berlin. Éliane Radigue, one of the most significant composers of the 20th and 21st centuries, left her work assisting Pierre Shaeffer and the musique concrète community of Sixties France to carve out her own wake. Over the ensuing decades, Radigue developed an unprecedented style of minimalism for analog synthesizer with a geologic patience and gorgeous presence.

"Occam XI is a piece for solo microtonal tuba, composed in 2012. Radigue doesn't notate her compositions, rather they arise through direct contact with the musician. So in a sense, her acoustic music might be seen as an extension of her former work with the ARP synthesizer. The contact with the sound material is direct, and the process of composition arises in interaction with the interpreter. The flip side of this is that the process of interpretation also arises in interaction with the composer. It's much more of a positive feedback loop than a one-way process."

An important feature "of working with Éliane is that she works directly with the performer. If someone else wants to learn Occam XI, they'd have to study it with me. This is very unusual within the world of new music, in which interpreters are often seen as interchangeable.

"In the case of Occam XI, there are currently only three other people in the world who play a fully microtonal tuba, and it isn't possible to play it on a standard tuba. I hope that as other tuba players gradually move to the microtonal system, Occam XI may come to be seen as the very first solo acoustic piece – without using live electronics – that was composed for it."