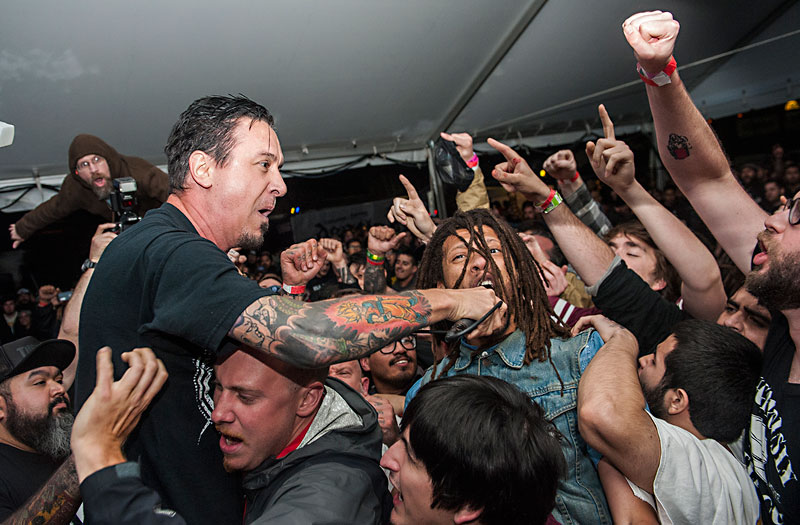 Sick of It All: The Converse/Thrasher stage in the parking lot of Gypsy Lounge last year required a special event permit. (Photo by David Brendan Hall)

South by Southwest Music still looms a month away, but a recent permitting quagmire elicited early panic attacks for Austin's business owners and event organizers preparing for the March megafest.

Last Tuesday, the Austin Center for Events (ACE) – the city's regulatory authority on special event permitting – abruptly stopped accepting permit applications for the week of SXSW. In a Jan. 7 press release, ACE had announced a deadline of Friday, Feb. 5, at 5pm "or until 120 applications have been received, whichever occurs first." The 120 threshold then hit without notice of impending closure, catching organizers off guard.

"I've been on the phone with ACE all week, verifying data points and kicking around scenarios about the upcoming submittals I was preparing," he said last Thursday. "When I got notice that they weren't accepting any more permits, it felt like the rug had pulled out from under me."

Hicks estimates his applications represent $1 million in activations. According to him, that week totals 65% of his business' annual earnings. Permitting failures, he says, could cause local promoters to get sued by their clients. Events requiring temporary use permits (TUPs) and temporary change of use permits run the gamut between corporate-sponsored parties and reggae bands playing in parking lots of e-cig shops, but many of those left in the lurch last week scaled in betwixt: Hotel San José, Gibson Guitar Showroom, official SXSW showcases at St. David's Church, and events put on by local ad agency GSD&M – including Ray Benson's 65th birthday party.

"This came down without warning and it's quite shocking to think our company, as the city's onetime poster child for permitting, may not be able to get our event cleared," GSD&M's David Rockwood vented.

Asked for his reaction to so many event producers being caught off guard by the applications reaching early capacity, ACE corporate special events program manager William Manno pointed to the Jan. 7 press release and added, "This message was also broadcast via several social media sites and emailed to numerous event promoters."

On Monday, promoters who had the wind knocked out of them drew a breath of relief when ACE eventually accepted for review all applications received prior to 5pm on Friday. Manno said he was able to do that because several erroneous applications were discarded. That quelled the public backlash, but doubts in communication between ACE and the music industry remain, and additionally the situation raises questions of how ACE landed at the magic number of 120 permit submissions accepted, down from 147 last year and 167 in 2014.

"It's an arbitrary number," complained one SXSW employee who wouldn't speak on record for fear of retribution. "It doesn't take into account what area of town the event requesting a permit is in or the intensity of use. Spotify House has a different impact than a Yard Dog show."

Manno says the application cap and deadline support the city's efforts to improve public safety during the spring festival, but also reasons that city resources factor into the specific number.

"With current staffing levels in the various departments that review applications and inspect venues, 120 is the number that best allows for proper ongoing inspection of venues and impacts to right of ways," Manno wrote. "As long as current staffing levels remain the same, I see no reason to decrease that number in future years."

When asked about claims by Austin Music People executive director Jennifer Houlihan, in a letter to Mayor Steve Adler, that ACE has no authority in city code to decrease the number of event permits, Manno didn't reply. "Playback" could find no available city code specifying ACE's structure or authority. On Tuesday, South Austin craft beer temple Whip In canceled plans for its annual SXSW party because they missed the deadline to apply for the necessary TUP.

Whip In general manager MJ Smith, an experienced permit applicant as a founder of Queerbomb, said she hadn't heard about the early deadline and points out that current TUP applications still read: "Must be completed 10 days before proposed event."

"ACE obviously just assumes that if they put out a press release, everyone will see it, but that's just not the case," Smith says, adding that the business has lost over $1,000 in deposits because of the cancellation. Her attempts to meet face-to-face with ACE personnel this week were rejected by a receptionist.

"I can see there's no flexibility when it comes to businesses that've helped make Austin what it is," she sighs. "So we won't be doing South by Southwest."

Tamping down SXSW parties is an obvious step toward the greater goal of public safety, but if that process diminishes local participation, perhaps it's not being handled correctly.

News broke last July that the Austin Music Hall was destined for the wrecking ball. The teardown makes way for a 28-story office tower overseen by Cielo, the property group that acquired the city's second-largest indoor venue in 2014, after OmniBank repo'd it from veteran local concert promoter Tim O'Connor's Direct Events. Initial reports slated the 21-year-old venue's demolition to begin in January.

And yet, it's now February and the Music Hall still stands. Last Tuesday's Stubb's engagement with G-Eazy prompted enough demand amongst hordes of pop-rap-lovin' kiddos that the show was relocated to AMH – still in operation under management of the Electric Company. Next Thursday, Kid Cudi loads in, two days before a dance music event called A State of Color – Neon Riot invades the venue at 208 Nueces.

Jason Hicks, general manager of AMH, confirmed that the venue has gotten an unexpected stay of execution. The reason, he says, is construction on the sidewalks outside – part of the city's Great Streets project. Until those improvements are completed, the Music Hall won't be demolished.

Hicks expects the venue to get a proper send-off with a series of official, big-name SXSW shows. After that, it'll be reduced to rubble.

Voter turnout was tremendous for the Austin Music Poll. Even excluding 2,491 ballot-stuffers – nearly a third of them voting for Austin Kimble Trio in every relevant category, and then some – it was still the highest polling total in recent memory. Thank you, Austin.

The winners will be announced at the Austin Music Industry Awards on March 7 at the Palm Door on Sixth, hosted by yours truly and the Spade to my Farley, Chronicle investigator Chase Hoffberger.

Super bowl Victory: Black Pistol Fire's new single "Hard Luck" was featured on a Toyota Prius commercial during the Super Bowl – the one where they turn a Prius into a cop car to catch bank robbers also driving a Prius. Local singer/fiddler Ruby Jane and band, meanwhile, are featured among the local scenery in a KFC ad for the Kentucky BBQ Pulled Chicken Box Meal.

Asleep at the Wheel welcomed longtime booster/collaborator Willie Nelson as a surprise guest last Thursday at the Broken Spoke, where they polished chestnuts including "Nite Life" and "Rainy Day Blues."

Eliza Gilkyson celebrated a small victory recently in her ongoing legal proceedings against Disney. The local songsmith seeks to recover royalties for the continued use of The Jungle Book classic "Bear Necessities," which was written by her father, the late Terry Gilkyson. In late January, a California judge reversed another court's acceptance of Disney's motion to dismiss based on the statute of limitations and the case will now go to trial. Bill Murray sings the song as Baloo in the new Jungle Book movie, the trailer of which premiered during the Super Bowl. 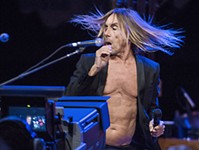