A new breed of anarchy in the ATX 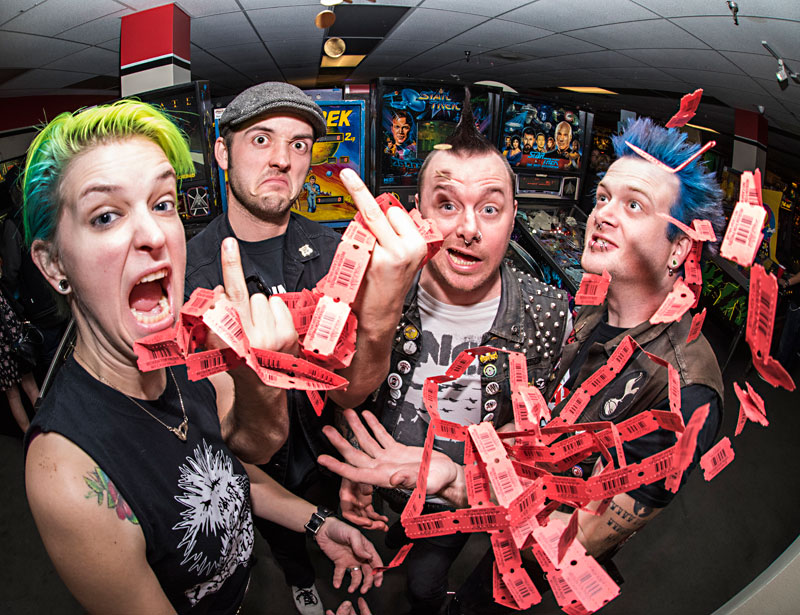 "People look at me and think, 'Are you a greaser?' I say, 'If you only knew what I've been through!'"

The sleepy-eyed character sitting behind the drum kit in a rented rehearsal space off Cameron Road suddenly lights up – beginning at his blazing pupils. Not that he's been impassive for the past half-hour of conversation. Dark hair parted at the side and slicked back with pomade, tattooed arms emerging from a white tank-top undershirt, he animates instantly with purpose.

"I embrace stuff like that," exclaims the fiery young drummer Armando Lopez of rising locals Equinox. "Then I show 'em what I've got!"

"Definitely," agrees singer/songwriter/guitarist/bandleader Kat Meza, lounging across the room in a shredded Motörhead T-shirt, her black shag reminiscent of Joan Jett. "Just because we shave our heads doesn't make us any less inspired."

"It's what's in our hearts," emphasizes Lopez.

"If anything," Meza amplifies, judging us by how we dress "makes us angrier and more pissed, and more willing to fight harder for what we believe in."

"Punk rock isn't a popularity contest," finishes Lopez, fire undimmed. "It's a way of life, and what you've been through in life. It's an attitude."

This isn't 1977. It's not even 1981, the year hardcore exploded, or 1995, when punk went fully commercial in the U.S. behind acts like Green Day and Rancid. This fiery rhetoric was issued a little over a week ago, by one of a fresh wave of explosive young acts in Austin rekindling the classic punk ideal.

"Unless you're an asshole," jokes April Schupmann, whose powerhouse drumming for Sniper 66, Krum Bums offshoot Starving Wolves, and Riverside Riot (as a stand-in) has garnered her a reputation as one of this era's finest. "Then you're just going through a phase."

Only cynics would look upon recent activity at Red River's Irish pub Bull McCabe's and sneer that this iteration of punk is a Xerox of a Xerox of a Xerox, with detail getting lost as the generations build up from the Ramones' original blueprint. Not that musicians belonging to this new breed will argue that bands toiling for years qualify as anything new. New scene leaders Sniper 66 were founded in 2009, Riverside Riot in 2013, and Worm Suicide began in Victoria, Texas, 20 years ago. 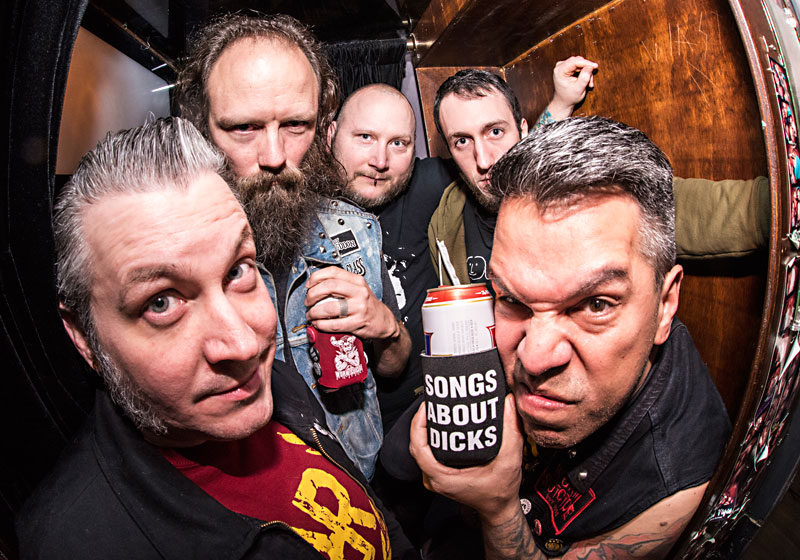 None of that disqualifies this from being a jolt of electricity in a now-traditional American and international musical subculture. Punk may never again be the shocking, revolutionary force it was in 1977, but it retains relevance and vitality as urban folk music for the disenfranchised and dispossessed – an economy of do-it-yourself actualization and aesthetics. And don't call it street punk.

"I never liked when we got called 'street punk'," remarks singer Bones DeLarge of Lower Class Brats, pioneers of the genre locally, essentially a crossbreed of first wave UK punk and Oi!, its skinhead offshoot from the early Eighties. Lower Class Brats and Krum Bums enjoy godfather status to this current cross section of punks similar to previous strata of Austin snots paying fealty to the Dicks and Big Boys.

"It was worse when we got called Oi!" shrugs LCB guitarist Marty Volume.

Most musicians have issues with any classification of their work. And when you're dealing with punk rockers, you're interacting with especially contrary, argumentative sorts. It's understandable how a blanket stamp of "street punk" can be applied to the scene if one only shoots a cursory glance at the studded leather jackets, patched jean vests, and multicolored mohawks favored by many of the musicians and much of the audience here.

Fashion hallmarks aside, punk rock in 2016 remains more sonically diverse and less dependent on a rulebook than at any juncture since the genre's clamorous birth. Think about even a cursory smattering of prime names from 1977: Wire, Cramps, Stranglers, Dead Boys, Suicide, the Clash. Do any of these bands sound like the other? No, aside from a shared dissatisfaction with mainstream culture and politics, a burning alienation, and perhaps being the only teens in their hometowns to buy Stooges and New York Dolls records. "There's a ton of punk bands here," says bassist Bobby Blair of reformed Gulf Coast punks Worm Suicide, as notable for their furious rate of shows per week as for their humorously nasty bash. "Everyone's got their own spin. No one's trying to sound like other bands."

"I've been playing for a long time," says Riverside Riot singer/guitarist Brian Ham­mer. "Even in the early 2000s, I'd hear thousands of punk bands that all sounded the same. You don't get that here or now. People have developed their own shit. And you have to be on your shit to do anything in this town, because there's so many good musicians.

"If you're not on your shit, you might as well hang it up – and not only in your music," he continues. "You have to be friendly with everyone. Understand this is a community, too. You'll be out if you're not cool!"

"I don't know if this happens anywhere else," he says. "Four musicians are put together through a drawing and are given a month to become a band. Then you're given another month to write five original songs and learn a cover you've never done before. You learn how to work with different musicians, and you come away with new knowledge." 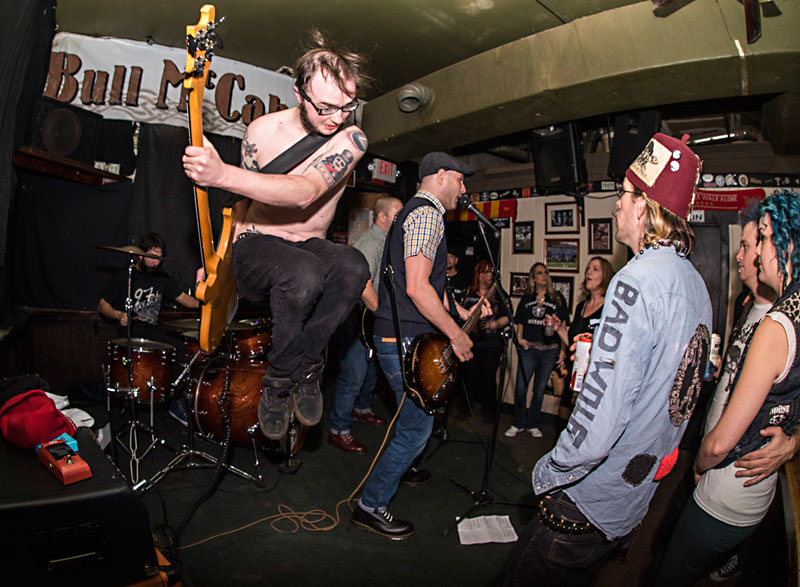 "The hardest part is coming up with the band names," laughs Leigh.

"That's something I've worked towards," explains scene best April Schupmann, drum deity. "I've been trying to break that stigma all my life. Can I just be the drummer? And a lot of the women in this scene are working their asses off to be equal. I give some of the female musicians the eye sometimes: 'Let's see what you've got, girl!' Because I want them living up to their potential rather than resting on their tits."

Rodriguez is especially enthusiastic about the talents of Equinox's Kat Meza.

"There's a pain and an anger coming through in that voice," he offers. "It's not what we're used to seeing on TV – not this light voice. There's a real struggle, something being said. That's something these bands need to latch on to. There's something romantic about that anger."

Ultimately, no punk scene flourishes without a focal point venue. Locally, as with Raul's in the late Seventies and early Eighties or the Blue Flamingo a decade later, Gerry Langan and Johnny Maginnis' 8-year-old iteration of Bull McCabe's, the Irish pub on Red River, has become punk central over the last two years.

"Without Gerry and Johnny, none of this is happening," states Brian Hammer flatly.

"We finally figured out Red River is a punk rock street," opines Maginnis. "We love the music, and bars are turning punk bands away right now. We didn't want the music going extinct. We wanted to keep it going for these young bands coming up. It's that type of bar."

"I think people are remembering how it used to be here," surmises Bull McCabe's booker John Blair. "People moving here are jumping aboard, wanting to expand how they do their music scene here. Everybody's getting more involved. Bands are all working a little closer together. Everyone's working hard to keep it going. This is a more intimate venue. It's a more personal deal between the bands and the audience."

"Some people don't like playing such a small place as Bull's," says David Rodriguez. "But if you wanna have a good time, sit down and bullshit with Johnny and Gerry. They're such characters, and they're so open to the music. And that place, when you get the right atmosphere, it's like you're in a pirate ship and you just plundered the city. It looks like it's moving, like it's bouncing, because it's just a little hallway. 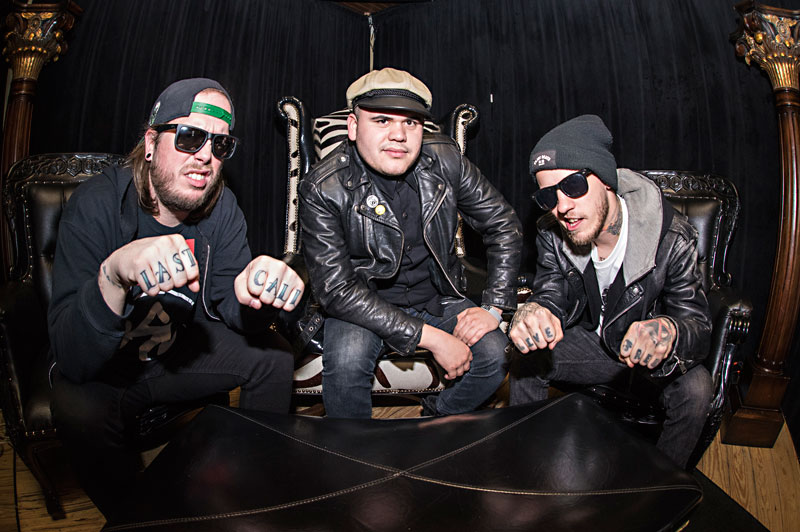 And guess what? This scene is hardly a local phenomenon. A new generation of punks is erupting regionally, nationally, and internationally, be it San Antonio's Semi-Automatics and Dispicables, Denver's Bad Engrish and Potato Pirates (who split a new 7-inch with Sniper 66), Ottawa's Zex, or UK acts the Gaggers and Cyanide Pills. Even so, the members of Equinox note that Texas in general, and Austin in particular, is getting major props for the strength of its modern punk scene.

Lay it at the feet of Punks on Parade singer/guitarist Ryan Johnson, who identifies the genre's prime motivation: "I write about the stupidity I encounter every day. I get so frustrated. Writing about it helps."

"There's a need for this," says an emphatic Kat Meza of Equinox.

"Some of us are older," drawls her bandmate Armando Lopez. "We have life experiences we can draw from, lyrically. We're ready to be heard."

"My older bands," reflects Meza, "were more concerned with drinking and where the next barbecue would be than coming out with new songs and promoting and networking."

"I honestly got tired of being the one in the crowd," says Equinox bassist Kris Havok. "I wanted to be the one spreading the message."

Street Punks on Parade, a photo gallery accompanying this story, can be found at austinchronicle.com. South By So Much Punk
Pussy Riot, 'The Punk Syndrome,' and – count 'em – two docs about Green Day: Yep, punk is having a moment in the movies 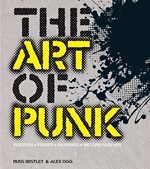 The Art of Punk
Don't dance about architecture, simply flip through the art of punk.