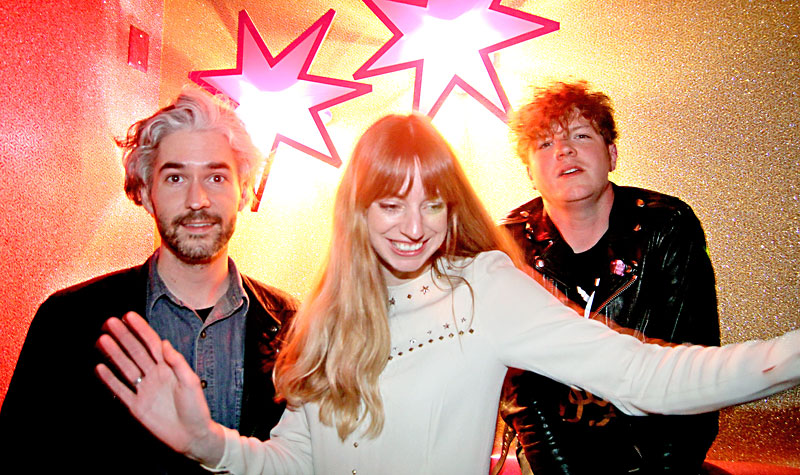 Eternal refrain of both teenagers and, in 2016, adults listening to popular music, what else is there left to say, hear, or create that hasn't been done before? Ringo Deathstarr.

The Austin trio remains impervious to its critical dismissals: too reverby, too shoegaze, too derivative. Tracing Ringo Deathstarr's sonic arc from the Eighties UK guitar summoners of 2011 debut Colour Trip to the sparser, lyrically tangible, and structured afterburners of new third LP Pure Mood means journeying back through decades of homegrown musical pervasiveness. Meet the past, present, and future of Austin psychedelia.

A lysergic mecca in the Sixties and Seventies, the Texas state capital warped its native blues and country through the high-watt mind control of the Vulcan Gas Company and pioneering psych acts such as the 13th Floor Elevators. Whether five years ago or today, Ringo Deathstarr signals a rebirth of those hazy days. Step aside Disney EDM, bro country, and rap lite.

611 E. Seventh makes for a fitting spot to talk with a band about progress. The Downtown music staple has seen its fair share of resurrections. Beneath a tangle of string lights, each with a sharp sense of humor, Elliott Frazier, Alex Gehring, and Daniel Coborn are seated at a picnic table, having just deafened everyone standing inside Barracuda with a wall-of-noise sound check.

Fresh off their eighth Japanese tour, where they've garnered a rabid fan base (revisit "Playback: Ringo Deathstarr Awakens the Force," Jan. 15), they're too polite to point out that it's way too cold to be doing this interview outside. Frazier huddles into himself, having left his jacket in the venue.

The final Friday of Free Week counts him grateful for the local music scene. He credits the now-annual opportunity to be completely immersed in other local bands as a significant influence on Ringo Deathstarr's initial sound of a decade ago.

"You don't have [Free Week] anywhere else," he points out. "For me, it made me know, 'Okay, I don't wanna sound like any other local bands.' That's where it really all starts."

Back then, My Bloody Valentine wasn't touring, nor could you catch up with Ride, Slowdive, or the Jesus & Mary Chain.

"I thought to myself, 'I'll never see those bands. There's nothing like that that I can go see live,'" he says. "At the time, it was all Bob Dylan and AC/DC rip-offs. That's why I started the band – to experience that kind of sound in person."

Austin's first Psych Fest took place in 2008, confined to a single Saturday and a handful of acts (including the Black Angels and Strange Boys) at the Red Barn on Burnet Road. Both Gehring and Frazier recall how momentous playing those early endeavors felt. Last year, Psych Fest – now a three-day sprawl of music and mayhem at Carson Creek Ranch – re-branded as Levitation, so named for Roky Erickson and his 13th Floor Elevators.

Ringo Deathstarr's trajectory matches in kind when taking into account one of Levitation's headliners last year. Scheduled for Manchester's Cosmosis Festival in March, the locals are sharing poster space with the top-billed Jesus & Mary Chain. Gehring dryly notes how excited she is to tell the Scots that the Texans are ripping off their sound.

"When people say that now, I feel like, 'Have you even taken the time to listen to any of the material we've released since 2011?'" sighs the bassist. "We have so many influences that I'm always surprised people continue to pick out the exact same one – every time."

"There's no Jesus & Mary Chain on this album, I can tell you that," adds Frazier. "There's more Stone Temple Pilots."

Pure Mood came out at the end of 2015, and with it appeared a new version of Ringo Deathstarr. Gehring cites personal favorites like the Cocteau Twins and Dinosaur Jr., while Frazier draws from the books he reads aloud to kids at the school where he works. "Heavy Metal Suicide," a driving standout, derived its chorus from the singer's experience as a Hotel Vegas door guy: "I don't mind if you don't like me."

"I always thought it was weird that we got shit on so much for being so close to the source material when there's a lot of other bands in the same genre that are definitely more popular than us and sound way more like it," shrugs Gehring before pausing, laughing, and adding thoughtfully, "I think our name's too dumb."

The band credits ... And You Will Know Us by the Trail of Dead as a major local inspiration for Ringo Deathstarr, and production guru Chris "Frenchie" Smith of Nineties noise-pop breakouts Sixteen Deluxe and the Bubble Recording Studio for teaching Frazier everything he knows about sound capture. The latter skill made the band autonomous.

"There's a support system here that you don't have everywhere else," nods Frazier.

"Texas moonshine" blurts one of the band members when the group's surveyed for a Ringo Deathstarr descriptor. Future directions remain unclear – sparser, with more metal influences perhaps. Conquering the challenge of translating heavily layered albums live, a struggle with several tracks on Pure Mood, lays ahead as well, according to Frazier.

"I think we're on our way to having some actual orchestration next time, maybe," he says. "We're still only three people, so it's hard to find that balance."

Coborn offers the simplest answer on the future of Ringo Deathstarr.

"I wanna keep doing it until – until I feel stupid for doing it. That's when I'll know it's time to quit."