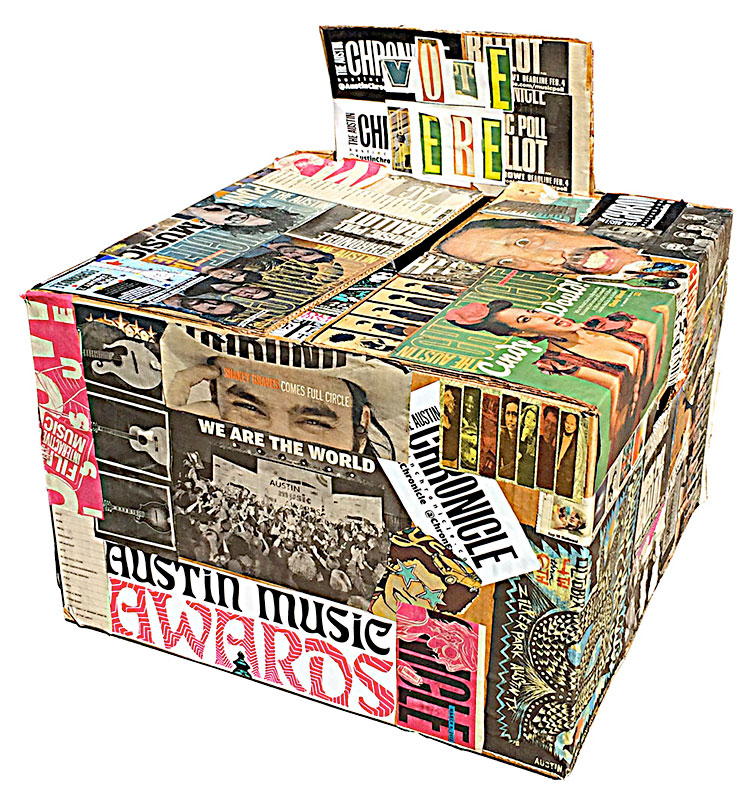 Here's a truism about voting: The more people do it, the better it works.

I'm talking about unfiltered democracy, the power of the people, a collective voice that cannot be ignored. No, this isn't about "making America great again" by voting for some corporate clown in the Texas primaries. I'm advocating for a real popular vote: 59 categories determining the top bands, musicians, recordings, and businesses in our community. If you haven't already voted in the Austin Music Poll – make haste. The ballot, available on p.3 or online at austinchronicle.com/musicpoll, expires Monday, Feb. 1.

Forgive me for pounding the podium so hard; I'm new to this job. Yours truly is essentially the Music Poll's one-man election board, tasked with counting votes, sniffing out ballot stuffers, answering technical questions, and rocking, rapping, and Americana-ing the vote. It's a rare responsibility, undertaken by only three individuals – Jeff Whittington, E.A. Srere, and Margaret Moser – since the first ballots were cast 34 years ago.

Appropriately, I inherited the position from my mentor, who continued tallying votes last year after retiring from producing the Austin Music Awards. Ever since I became the Chronicle's Music columnist, an equally exclusive gig, people often ask me if I consider myself the new Michael Corcoran, Ken Lieck, Chris Gray, or Austin Powell.

So far, so good. This year's voter turnout is comfortably in the five digits. That's up from last year, but still not on par with Austin's booming population. Newcomers, here are some good reasons to vote:

You're tired of mouthbreathers determining the mainstream and want to demonstrate what acts "real people" like.

It's an exercise in community-mindedness, pointing attention to local offerings as you contemplate your favorite deejay, record store, guitarist, and rapper. If you don't have a favorite new music venue or Latin band, perhaps you're not experiencing Austin to its fullest.

Your musician friends are too modest to ask for your vote. Tangible recognition is hard to come by in this lifestyle where adulation is momentary. "Look mom, I won 'Best Drummer'! Maybe I'll be able to move out soon."

Because this year's Hall of Fame nominees are the strongest ever. We scoured the annals of past inductees, from ... And You Will Know Us by the Trail of Dead to ZZ Top, and rounded up 10 overlooked icons: Big Boys, Sarah Elizabeth Campbell, James Cotton, Dangerous Toys, Ed Hall, Flatlanders, Fuckemos, Davy Jones, Bill Kirchen, and Texana Dames.

That's the Music Poll's significance, after all: historical record. By tallying Austin's top picks through the last four decades, viewable at austinchronicle.com/austin-music-awards, the live music capital's greater narrative comes into sharp focus. Blues hipsters the Fabulous Thunderbirds snagged the first two Band of the Year awards in 1981 and 1982. Thirty-three years later, body-rockin' conscious rappers Riders Against the Storm earned their own BOTY two-peat. Consider the ground covered between the two.

While Austin's never been lauded as the Recorded Music Capital of the World, homegrown hits have historically dominated the Poll's Best Song category: Timbuk3 capturing it in 1986 with "The Future's So Bright, I Gotta Wear Shades," Butthole Surfers winning a decade later for "Pepper," and Fastball sweeping every recording category in 1998 on mega-single "The Way" and album All the Pain Money Can Buy.

Statistics tell us that any year in which Bob Schneider (24 total awards) and Joe Ely (19) put out albums – and both did in 2015 – they'll take home plaques. I can't reveal results so, instead, here are some vague Music Poll prognostications:

Explosions in the Sky will never pick up the Hall of Fame plaque they won last year, which is fine because it makes a nice rolling tray at the office.

Best New Band will become the highest-voted category upon realization that it effectively has a cash prize. Music nonprofit Black Fret automatically nominates that winner into their patronage system, which means they'll earn either a $3,000 or $10,000 grant.

We will receive less than 50 paper ballots. It's 2016. Who the fuck has envelopes and stamps anymore?

At least one artist will be disqualified for ballot stuffing. We're monitoring the numbers daily and minding timestamps, IP addresses, valid emails, and write-in spelling. When someone is stacking the deck, it's obvious.

It's that latter mentality that's at times given me a crisis of faith in the Poll. Have the Austin Music Awards become a reflection of who best can manipulate social media instead of a reflection of Austin's favorite music? Will we have to switch to nominees one day instead of an open ballot to keep it honest? Time will tell.

There's absolutely nothing wrong with campaigning for votes. Engaging your fan base is a trait of a successful independent musician, but there are two lines often crossed. One is merely bad etiquette: asking people to vote for you in every category. If you honestly think you deserve Band of the Year, Musician of the Year, Best Rock Band, Best Producer, Best Songwriter, Music Industry Hall of Fame, Song of the Year, Album of the Year, and that every member of your band is independently the best at their instrument, then you're either Bob Schneider or a deluded egomaniac with no respect for your peers. Be realistic – or as Too $hort eloquently put it: "Get in where you fit in."

Worse are the artists who stuff the ballot using bulk-vote-purchasing websites. I inquired with representatives from two such sites: Votes cost roughly 10 cents apiece. Repeatedly voting the same ballot using a list of emails won't get you any further. Cheating to win a contest isn't any victory at all.

Being a good voter means only abiding by one rule: Choose who you love. By the time this hits newsstands, there'll be three days remaining and plenty of action left on the table. Close-call categories include Punk, Country, U-18 (Under 18), Best Songwriter, Best Music Store, Best Recording Studio, Best Venue, and Best Ongoing Residency. Here are a few necessary clarifications in response to voting confusion thus far:

Best Music Venue Outside City Limits means a club that's not in Austin, but be specific. Don't just write "Round Rock."

Best Poster should be a specific poster with the artist and band/venue's name. I'm among those who screwed it up by just writing Mishka Westell on my ballot. Perhaps a change will be in order next year to rename the category Best Poster Artist, but for now it's Best Poster.

Best Music Writer refers to music journalists – not someone who writes songs. We have another category for that: Best Songwriter. Feel free to vote for me in either – or contact me at kcurtin@austinchronicle.com with questions.