On the radio, Rick McNulty choked back the tears.

"It's seven o'clock on Saturday night in our little city. This is the time Paul Ray would fire up his theme song for Twine Time – every Saturday for almost 40 years. And tonight he cannot do it. And tonight we are all heartbroken because he can't do it.

"Austin, Texas, has had a death in the family. We've lost a real character, a gentleman, a raconteur, a lovely, lovely man. A man who made us happy to be alive every time we heard his voice. So tonight, let's hear that voice one more time – doing what he did best: hosting the best damn radio show this town has ever known."

Cue the theme by Alvin Cash & the Crawlers.

Austin's greatest deejay is dead. My eyes well up at the sound of his voice. The mood of the archival broadcast lightens when Paul Ray plays Billy Ward & the Dominoes' epic pleaser "Sixty Minute Man." I can only laugh. Music kills the pain.

Twine Time was an "oldies" show in the same sense that a Stradivarius is a violin – a craft perfected, the gold standard, best in class. Every Saturday since 1979, Paul Ray shared his enlightened taste in vintage soul, blues, and R&B on KUT and later KUTX. He knew the ins-and-outs, the intimate details – players, labels, chart positions. Betwixt the hits, his playlists spun incredible songs that might be lost to time without men like Ray. Saturday night was an education for Austin – our favorite class.

The Austin Music Awards' Hall of Fame deejay passed on Friday, Jan. 15, in a South Austin hospital with his spouse of over 40 years, Diana Ray, at his side. He'd been laid up with a confluence of ailments for months, but ultimately, respiratory issues and pneumonia stole his breath. He was 73.

The night of his death, candles and incense burned on a makeshift altar for him at Antone's.

"Paul Ray was one of my favorite people in the whole wide world," gushed club co-owner Gary Clark Jr., making his onstage debut at the new venue with a house band that included Ray's onetime bandmates Denny Freeman and Derek O'Brien. Clark returned later to jam with childhood friend Eve Monsees, but it was the soundtrack between the sets that put a lump in everyone's throats. Monsees had brought in a tape she'd found laying around Antone's Records: a 1987 episode of Twine Time with Clifford Antone as the guest. Austin's two bygone blues scholars on one mic, playing the choicest of choice cuts. First up: Magic Sam & Shakey Jake, "I Just Got to Know."

"Paul had a great sense of humor and was quick with a big smile, but he was dead serious one day at a meeting when he declared, most memorably, 'There hasn't been any good music recorded after 1970,'" reflected fellow KUTX veteran Jay Trachtenberg, who knew Ray for 35 years. "Take that any way you want, but it showed the singularity of his musical passion. He was laser-focused on that period between 1945 and 1970, showcased with such soulful panache each week on Twine Time."

The two KUT lifers had much in common. Both hosted jazz shows and preferred the comforts of a spinning 45rpm single, but Trachtenberg outlines a key difference.

"Where I was a music nerd, Paul was a music hipster with style to burn," he explains, adding that Ray had an "uncanny" street sense. "He knew instinctively who was genuine and who was a poser. You couldn't pull the wool over his eyes. He would smell you out in no time."

That's because Paul Ray himself was the real deal – a musician who could walk the walk and "sing like a bird," according to Muddy Waters, whom he opened for in the late Sixties with his Dallas group the Playboys. After moving to Austin in 1970, Ray became a fixture at the Soap Creek Saloon, One Knite, and, later, Antone's.

"Paul was a mentor to all of us blues players because he was older and experienced. He taught us a lot," offered fellow Dallas transplant Jimmie Vaughan, who booked his first residency at age 13 (with his band Swinging Pendulums) at the suggestion of Ray, then later played with him in Storm and Texas Storm. "Paul was a real lead vocalist, who knew every old R&B song and rock ballad, and knew how to keep a crowd. He also played piano, bass, and drums.

"He could really do it all."

Vaughan adds that Ray was a talented songwriter, penning several tunes on the guitarist's albums Strange Pleasure and Do You Get the Blues? – the latter winning a 2002 Grammy for Best Traditional Blues Album.

Paul Ray & the Cobras, which featured Jimmie's talented kid brother Stevie Vaughan on guitar, became local favorites, winning Band of the Year in the 1977 Austin Sun Music Poll – the template for the Austin Music Poll, in which you can currently vote for Paul Ray as Best Radio Personality and Twine Time as Best Radio Music Program. Ray also served as host for the Austin Music Awards for its first 25 years.

"I went with Paul for the very reason that he was such a good frontman," says former longtime AMA organizer Margaret Moser, who chuckles in recalling Ray's disdain for punk and fussed-about folk. "To say Paul Ray was contrary is to overlook the high standard he held for music and the performance of it. This ethic is crucial to Paul Ray and who he was, because to me, he represented a throwback to the era of singers fronting big bands."

Ray attributed his hanging up the mic in 1978 to inhaling a West Texas sandstorm, after which he slipped comfortably into a new career as deejay the following year after inheriting Twine Time from friend Bill Bentley.

"He turned the program into an Austin treasure," wrote Bentley in tribute last Friday.

From there on out, Ray was a staple deejay on KUT, manning the midday microphone, hosting a Tuesday night jazz show, and soundtracking Saturdays with Twine Time. His loyal listeners protested loudly when Ray's hours were cut in 2009. In 2012, famous fan Robert Plant called in during Twine Time and pledged a huge donation along with a request:

"Could you play 'Steal Your Heart Away' by Bobby Parker?"

Everybody in Austin listened to Twine Time on Saturday night.

What will we listen to now? KUTX spokesperson Erin Geisler tells Playback, "We don't foresee continuing Twine Time, although we haven't fully contemplated what to do next. Rick [McNulty] has done a great – and unenviable – job filling in for Paul, but no one really can replace Paul. He had a very specific approach, much of which was clearly inherent to him. He not only knew the music, he knew many of the players and lived the entire era.

As we adjust our emotional frequencies, preparing for a time without twine, a void opens and looks only to widen as Austin's legends die off. Can my generation produce an equivalent – a character universal, yet unique, who is such a master at their craft that their passion becomes contagious? Someone with a soul sturdy enough to become a foundation for this community? Paul Ray gave us a lot to live up to.

Get one last taste of Twine Time on Saturday at 7pm as KUTX airs a special tribute featuring interviews with those who knew the man best. 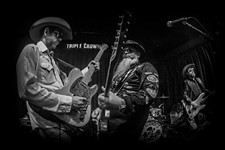