Smoke machines, strobe lights, and guyliner on a darkened stage initially made Aviateur seem more concerned with image than music. Fortunately, the local quintet's tight blend of echo-laden Eighties Brit rock and Nineties alternative proved the group more than goth-tronic posers. Joined by Charlie Sexton scion Marlon on lead guitar, 19-year-old Hunter Sharpe circled the midpoint between slick alt-rock and shambolic abandon. Prominent synth licks colored every song during Knifight's ensuing set, particularly the tunes from latest album V. Keenly crafted and masterfully performed, their synth rock vision from group leader John Gable sounds tailor made for both 120 Minutes circa 1987 and 101X now. Drummer Nick Cogdill pushed the sextet into overload, bashing the disco back-beat in the night's most impressive wall of noise. Battling its terrible sobriquet, Wonderbitch let the faint scent of cheese waft over its complex but accessible songcraft. Like a prog act reincarnated as a yacht rock band, the quartet obscured its intent with onstage goofiness that never overpowered obvious melodic gifts and instrumental prowess. There's not another group in Austin that baffles and beguiles in such perfect harmony. 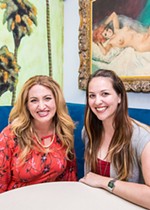 Snapshot: Side Project Sundays at Kitty Cohen’s
Don't call it a sidepiece – these artists are pouring a lot of creativity and energy into their second and third bands