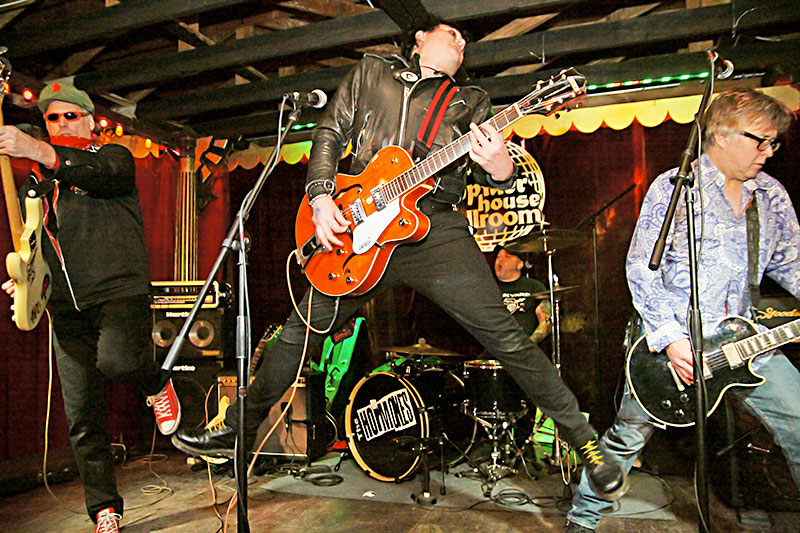 The Hormones (Photo by Shelley Hiam)

Opening underdogs and Austin-via-Brazil quartet Vinyl Laranja came out swinging. Filtering catchy songs from latest album Rooster Illusion through a haze of pop hooks, punk energy, and hard-rock breakdowns, the transplants delivered guitar thrills, a freewheeling sense of humor, and infectious enthusiasm. The good vibes continued with foursome Knockin Bones, who trucked in standard rough and tumble street punk on EP Saved My Soul. Their obvious joy transcended the material for a potent caffeine rush. Veteran punk-pop trio the Beat Dolls debuted a pair of new songs to follow up its 2012 EP Death of the Party, but mostly stuck to its elder repertoire. The busy bass of Barry Anderson boogied the hard-strummed rhythm guitar and brassy singing of Angie Munsey (daughter of Dallas rockabilly Jack Starr) into crunching distinction. Death rockers Rebel Flesh canceled due to illness, but the recently revived Hormones – led by Chronicle scribe Tim Stegall – more than made up for the absence. Drawing from British glam, Sixties Rolling Stones, and Chuck Berry as much as from 1977, the energy-spewing quartet blazed through its repertoire. Oldie "Julie's in Love" to newey "New York City Blues," with covers of Hank Williams' "Lost Highway" (via Jason & the Scorchers) and the New York Dolls' "Personality Crisis" peaked on the one-two punch of "Sell Out Young" and "Motörhead," and blasted the small but loyal crowd back into the night.