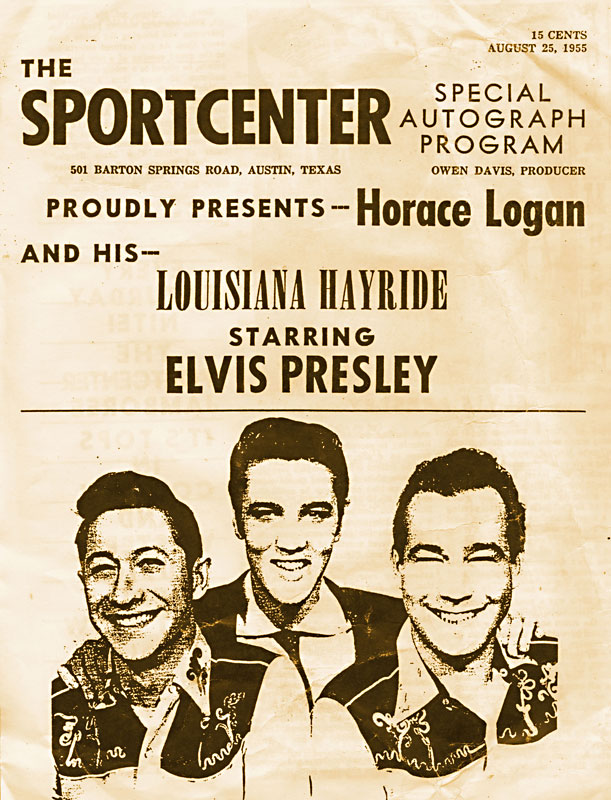 "Austin [in 1955] was ... boring," recalls locally bred rockabilly legend Ray Campi. "[Especially] to somebody who had ambition in show business or music. It was always a sleepy community."

"The basic difference between then and now is that Austin was a whole lot darker at night," says Armadillo World Headquarters co-founder and current day Threadgill's owner Eddie Wilson. "You could turn west on Lamar, and 90 seconds of hard driving later, you were out of town."

"I'd say it was country music," remembers Campi's younger brother Harvey of the local soundtrack to the Eisenhower years. "The honky-tonks in Austin were laid-back dance halls. Local country bands played, or Dessau Hall might have some stars come out. It was just a small-town atmosphere, really.

"The Skyline Club was way out of town in those days, and Dessau Hall too."

Between March 1955 and January 1956, a young, rhythm & blues-influenced country singer from Memphis, Tenn., named Elvis Presley played both those venues, plus the Sportcenter and City Coliseum on Barton Springs Road. He made waves across Dixie with a string of hit singles on Sam Phillips' Sun Records label that were then promoted via radio appearances on KWKH's Grand Ole Opry-rivaling Louisiana Hayride, on which the shrieks of teen females rode the driving sounds of Presley, electric guitarist Scotty Moore, and upright bassist Bill Black. Austin surrendered to Presley's hormonally charged twang-in-blue the same as any other territory he cut his swath across throughout the South.

"There was no reference point in the culture to compare it," Vernon native Roy Orbison later explained to British journalist Nick Kent.

"This cat came out in red pants and a green coat and a pink shirt and socks, and he had this sneer on his face. He stood behind the mic for five minutes, I'll bet, before he made a move. Then he hit his guitar, a lick, and he broke two strings.

"So there he was, these two strings dangling, and he hasn't done anything except break the strings yet, and these high school girls were screaming and fainting and running up to the stage. Then he started to move his hips real slow, like he had a thing for his guitar. ...

"For the next nine days, he played one-nighters around Kilgore, and after school every day, me and my girl would get in the car and go wherever he was playing that night."

Of the 225 one-nighters Presley, Moore, and Black played below the Mason-Dixon line that year, 100 took place in Texas. As their rhythmic tornado tore through tiny towns like Gladewater, Alpine, Gonzales, and Lubbock, young country singers witnessed the spectacle and heeded the call – Orbison, Luman, Buddy Holly, Waylon Jennings. Ray Campi didn't see Presley at any of his four Austin dates, but eventually met the young Army private who'd prompted him to abandon country for rock & roll at Fort Hood for basic training three years later.

"That was the last time I tried to sing like Webb Pierce or Lefty Frizzell," Lumen told Hemphill.

"It wasn't no big place," he chuckles. "Just an old beer joint."

Maybe so, but it was built in 1876 by German settlers as a two-story polka parlor. During the Thirties, Big Band luminaries including Glenn Miller and Tommy Dorsey moved feet across its dance floor. After burning down the following decade, a single-story version was built, notable for a tree growing out of the dance floor, and hosting country music sensations Ernest Tubb and Hank Williams.

The locals who saw Presley's tour vehicle pull into 13422 Dessau Rd. on March 17, 1955, likely heard "That's All Right" or his raucous "Blue Moon of Kentucky," but the visuals made their own statement.

"I talked to Elvis out in the car," says Allred. "I asked about his red suit, and he said, 'Well, I have two suits.' It wasn't like he was bragging."

Presley's repertoire remained limited at this juncture, comprising his Sun catalog and recent R&B charters that wouldn't hit tape until his first LP sessions in early 1956 – "I Got a Woman," "Shake, Rattle & Roll," etc. By the group's local return on Aug. 25, this time at the Sportcenter for Louisiana Hayride, their throbbing, echo-drenched "Baby, Let's Play House" had peaked at No. 5 on Billboard's country charts. That month, toughest Sun release "Mystery Train" began its rise.

Making the threepiece a quartet, Hayride staff drummer D.J. Fontana further bulked up the thrust in the barn-like former military building then used mainly for wrestling matches. The Austin American-Statesman reported that teenage girls "practically ripped him apart before he even got onstage." As the building transformed into the Armadillo World Headquarters in 1970, a concert program from that night was discovered among the rubbish ("Folk Music Fireball!"), alerting new owner Eddie Wilson of the hall's history.

The Skyline Club, where Presley and company next destroyed Austin youth on Oct. 6 sat among fellow roadhouses on the Old Dallas Highway. Later, it became one of Soap Creek Saloon's locations (with scenes from Willie Nelson's Honeysuckle Rose filmed there), then an Eighties punk club. Hank Williams' final performance took place there on Dec. 19, 1952.

"I don't remember any big fanfare about this guy Elvis Presley coming to town," shrugs Harvey Campi, then a high school student enamored of Eddie Fisher. "It wasn't a big show or anything, but the girls went crazy, and the guys were jealous. He played maybe an hour. It was packed, but it wasn't a real big place. I think it was because it's where people went every week to dance and rub bellies with pretty girls."

Don Jester, a Golden Gloves champ, high school football hero, and associate of future local gangster Timmy Overton, got so aggravated with Presley and his undulating hips' way with Austin women that he punched out the future King of Rock & Roll following what would be his last local performance for 21 years. According to Jesse Sublett's recent historical noir volume, 1960s Austin Gangsters, the attack followed a special guest slot at City Coliseum with Grand Ole Opry star Hank Snow, the other act handled by Presley's new manager Col. Tom Parker, on Jan. 18, 1956.

Eight days earlier in Nashville, Presley had cut "Heartbreak Hotel" as part of his new RCA Victor deal. It went No. 1 – on the pop chart. Austin didn't see him onstage again until March 28, 1977, in his Vegas/white jumpsuit phase, at the nearby Municipal Auditorium. Five months later, he was dead.

"He came here from Fort Hood when he was on leave [from Army basic training]," says Eddie Wilson. "There was a car wash on Guadalupe, and they used to have a little stainless steel burger stand on the curb. There used to be this chain called Somewhere Stands, and they sold Someburgers.

"So, I strolled on down, and sure enough, Lockhart's was completely without carhops. The story was that all three of them took off in a Cadillac convertible, Elvis in the back!" 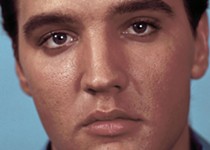 HBO Documentary Elvis Presley: The Searcher Debuts at SXSW
New archival footage of the king, the musician, the man behind the music 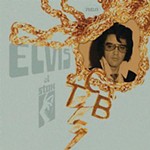