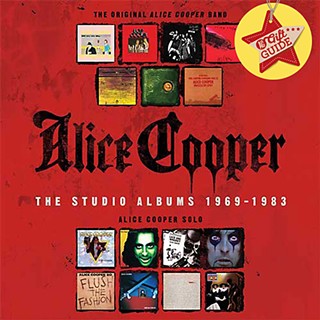 Vincent Furnier didn't spill out of the womb as a spooky, snake-handling, shock rocker. That's clear beginning on Zappa-affiliated 1969 inception, Pretties for You, showcasing oddball psychedelia via his squalling harmonica ("Sing Low, Sweet Cheerio"), Mike Bruce's hallucinating mellotron ("Titanic Overture"), and guitarist Glen Buxton's Syd Barrett spatter painting. Easy Action (1970) hints at future nastiness via "Mr. & Misdemeanor," but the coffin doesn't unhinge until Bob Ezrin overtakes production on 1971 breakthrough Love It to Death ("I'm Eighteen"). Follow-up Killer would mark a career pinnacle with hard rock muscle and dark theatrics ("Halo of Flies") if not for 1973's Billion Dollar Babies, a quintessential slab of political and perverse glam-bang with a chewy pop center ("No More Mr. Nice Guy"). After that, one thing's crystal clear from this 15-CD arc, whose blood-red box houses straightforward mini LP replications: Alice Cooper the band (1968-1975) trumps Alice Cooper the man (1975-present). Once the Detroit native decapitated his group and legally changed his name to that of the brand, there's the schticky Welcome to my Nightmare, followed by a gradual, 6-album skid that bottoms out with early-Eighties synth-addled disasters Special Forces and Zipper Catches Skin. New Wave effort Flush the Fashion (1980) boasts a decent single with the paranoid "Clones," while closer DaDa three years later – in which Ezrin, fresh off producing Pink Floyd's The Wall, plays most instruments – redeems as an underrated work of surrealist horror rock. Fans in a Dallas record store this October witnessed Cooper and survivors of his original band in a one-off reunion. 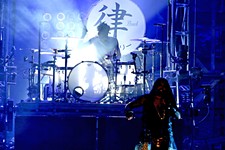