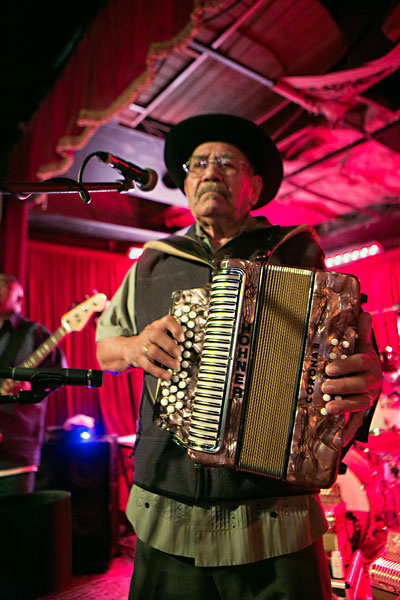 Which came first in Texas, fiddle or accordion? Chencho Flores, 85, brandished his first squeeze on Sixth Street in 1947. He's eased on the keys, but conjunto elder Isidro Samilpa, 80, still sings and slings the button box with genuine teen ardor. "It's been a wonderful scene," writes bajo quinto-playing bandleader Bradley Jaye Williams. "We're honored to keep the tradition of the 'tardeada' alive in the neighborhood." This summer, the first familia of accordions billed both of its first sons, Flaco and Santiago, on a rare weekend gig locally. Los Pinkys – further dance-induced by Javier Cruz (bass), Clemencia Zapata (drums), and Vicente Alonzo (bajo quinto) – give as good every Sunday.