Can clubs and hotels coexist in Downtown Austin? 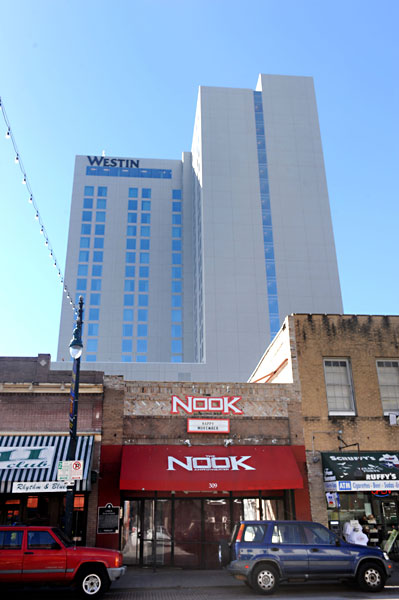 Taking in my scruffy appearance as I booked a Friday stay, the man helping me hesitated a moment.

"You know these rooms are $270 a night?" warned the front desk clerk at the Westin hotel, which opened in July just a block off the raging maelstrom at the heart of Austin's so-called "live music capital."

"Yes, and I want a room facing Sixth Street," I replied.

"The rooms on that side get really loud at night," he cautioned.

That's the reason for breaking my own personal bank account – a stakeout. Westin representatives were reportedly lodging complaints against nearby live music venues, so an open records request was filed by the Chronicle for area sound complaints. The resulting report revealed that the city's Music & Entertainment Division had recently performed a full-spectrum sound analysis at the Westin.

On Sept. 11, representatives from the four-person municipal office placed sound-monitoring devices inside a room on the hotel's fourth floor and another directly outside, then took readings at 15-second intervals from 10pm until 2:30am. A graph comparing the interior and exterior readings show that the Westin's walls fail to temper bass frequencies of music coming from neighboring clubs – even though those clubs were operating under the legal limit of 85 dB.

"This means the low frequencies are getting through the building because there is nearly no low frequency sound mitigating materials built into the building," reads the report, authored by manager Don Pitts.

The documents reveal that on Sept. 12, the city performed a second sound analysis on the Westin's 10th floor, which has been retrofitted with additional soundproofing. The data confirms that higher-pitched frequencies were dampened slightly, but there was almost no difference in the bass volume.

"This is probably due to the wrong material being used to try to mitigate low frequencies," concludes the report, adding that the Westin achieved the lowest environmental-design rating and neglected to conduct a pre-build acoustical analysis.

By the looks of the guitar pick collage hanging in my posh seventh-floor room, the Westin celebrates Austin music. I can tell why: By 8:30pm, the sound of the cover band on the rooftop of the Blind Pig is so loud and clear that I can play Name That Tune. Two hours later, their reverberations combine with another band at the Nook to resemble discordant prog-jazz.

After midnight, the bands stop, and thumping bass from DJs at the Nook, Blind Pig, and Maggie Mae's rooftop proceed into a rave lullaby lasting until 2am. Any guest looking for a quiet night would have switched rooms by now. Corie Lewelling, general manager of the Nook, a roofless venue occupying the former Black Cat space, says the police have visited her bar multiple times responding to noise complaints from the Westin.

"We've lowered all of our sound below the legal limit and I've met with the GM of the Westin trying to work with them," she says. "We're complying with the law, but the police are still being called."

Westin managers have perhaps taken up freelance sound monitoring as well. Outside my window, I spot a microphone and decibel reader – visual confirmation that this is a major concern for them. Not all hotels new or old to Downtown have contentious relationships with their musical neighbors.

Jennifer Houlihan, director of industry advocates Austin Music People (AMP), points out that the Rainey Street district's new Hotel Van Zandt took sound readings during South by Southwest several years ago to chart the loudest potential environment, then erected their building using those specifications. Representatives for Hotel Indigo, Holiday Inn, and Hyatt House, all popping up in the Red River Cultural District, consulted with AMP about coexisting with local venues.

"Sound mitigation was discussed before they even broke ground, and they decided to get triple-laminated windows," recounts Houlihan. "That means they won't have to call 311 every five minutes saying the music is too loud."

In every turn-it-down debate, there's a source and a receiver. For sources, i.e., venues, the city enforces guidelines (volume limits, curfews) and provides resources like loans for sound mitigation. Clear standards for receivers, such as hotels cropping up in prominent music areas, don't exist.

It's an issue City Council attempted to address in 2011 with a building-standards resolution that stated, "Pre-construction implementation of sound mitigation techniques may be more cost-effective and efficient than post-construction fixes to resolve conflicts with urban noise." City staff twisted it into a proposal requiring laminated windows on all commercial buildings over five stories, which failed.

"No one could figure out a way to address such a complex issue, so the result was an oversimplified proposal that didn't address anything," says Julie Fitch of the Downtown Austin Alliance, a nonprofit partnership of local business owners. "It was a one-size-fits-all approach that didn't take into account the surrounding area and how it might change over time. Nobody believed it was the right solution, so it ultimately didn't pass at City Council."

While Austin should be a national leader in music-related policy, San Francisco has beaten us to tackling this issue. In May, the Bay Area hub adopted protections for entertainment venues near new residential developments, authorizing their Entertainment Commission to hold hearings on proposed developments, then give recommendations to the planning department about potential sound issues. This ensures that no venue can be considered a noise nuisance if it's in compliance with appropriate permits and laws.

A potential solution for the local issue of concert sounds seeping into residential dwellings is for the city to adopt the "agent of change" principle, meaning whichever party changes the circumstances of a situation is responsible for managing their impact.

"If you're a music venue coming into a quiet neighborhood, it's your responsibility to reach out to your neighbors, take care of your sound mitigation, and abide by the guidelines," explains Houlihan, who's been promoting the principle to city officials and hopes to see it included in CodeNEXT, the upcoming revision of Austin's land development code. "If you're a hotel building next to a music venue, it's your responsibility to determine how you'll insulate to keep the sound out.

"When someone comes into an existing neighborhood, they must recognize that it's not a blank canvas," she continues. "There's an obligation to engage with that existing community."

The Foo Fighters released an EP on Monday that was written and recorded during their ACL Fest layover last month. The five-song collection, named Saint Cecilia after the local hotel where it was cut with local engineer Kevin Szymanski, features impromptu backing vocals from Ben Kweller. Read Dave Grohl's love letter to Austin at www.saintceciliaep.com.

The Long Center will turn its front porch into a concert venue next year. The Skyline Theater, a joint effort between theatre booking magnates Nederlander and local event producer Paul Thornton, will serve as a 7,000-capacity outdoor stage that hosts a handful of concerts annually.

Formerly Red 7, the new venue at 611 E. Seventh St. doesn't open officially until next month, but it's had recent test runs. Saturday hosted a cadre of loud locals including Lung Letters and Carl Sagan's Skate Shoes, while Monday brought the hellfire of masked rockers Midnight. Owners haven't revealed a name, but we're getting promo emails about bands playing "Barracuda."

Jimmie Vaughan performs with the 385-piece Longhorn Band during halftime of UT's Thanksgiving Day home game against Texas Tech. "It doesn't get any more Texas than this," the bluesman confirmed.