Whole Lot of Rockin' Goin' On

Linda Gail Lewis jackhammers the piano in the family tradition 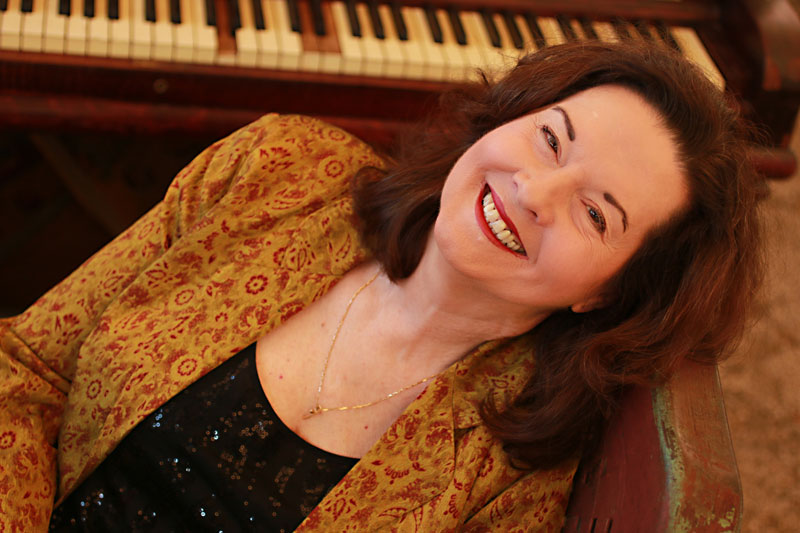 "I have to play faster," laughs 68-year-old Linda Gail Lewis, newly minted Austinite and, according to her new LP, Hard Rockin' Woman! "My hands're small, and I have these short, stubby fingers. I don't have the reach of other piano players, so I have to play faster to cover what they can do!"

The Ferriday, La., native jests. Watching her working with daughter Annie Marie and her new son-in-law, local rockabilly guitar wizard Danny B. Harvey – instrumental in the creation of Hard Rockin' Woman! – it's apparent she's being modest about her keyboard mastery. Her boogie-woogie chops are brutal, driving, Lewis playing with every part of her body. Her accompanists have to work triple hard to keep up.

Consider her piano teacher: older brother and pioneering rock & roller Jerry Lee Lewis. Not having touched a keyboard until age 40, she was primarily known as a wailing vocalist, à la Wanda Jackson. Her piano playing is the major revelation of the new disc, her first American release since the Nineties.

"When my sister-in-law kicked me out of my brother's band in 1987, I had to start playing piano myself," explains Lewis prior to her performance for the Soul of a Musician series put on by St. Matthew's Episcopal Church at the Iron Cactus. "To get that sound I wanted."

A solitary lesson from her brother backstage in Germany staked her in the family business. Consider the gene pool: Jerry Lee Lewis, country star Mickey Gilley of Urban Cowboy fame, and controversial televangelist Jimmy Swaggart. Those three men, all cousins, were born the same year, in and around Ferriday. All play the same style of boogie-woogie piano.

"We learned from him," nods Lewis. "We surely have some talent in our family, but I have to say what my dear cousin Mickey Gilley says: 'We can all play, but none of us can play like Jerry.'"

Now, Linda Gail Lewis passes on the family tradition to daughter Annie Marie, killing it as a vocalist in her own right after years occupying the backing vocals slot in her mama's band. Mama long enjoyed the very same position in Jerry Lee's band.

"I was born in '47," begins Lewis. "So in '57, when 'Whole Lotta Shakin' Goin' On' hit, I was 10. My brother called Mama and said, 'Mama, I want you and Daddy and Linda Gail and Frankie Jean to have everything that I have.' So he shared everything he made with us. He bought us a brand-new Fleetwood Cadillac, moved us into a really nice house in town, and got us new clothes. Mama had two dresses: one to wear at church and one to wear at home. That's all she had.

"We went to Dorothy's Dress Shop in Ferriday with $1,000 Jerry gave us and bought everything they had in our sizes."

Once the family relocated to Ridgecrest, a fancy spinet piano replaced the upright Jerry Lee had learned on from age 7 and then had sent to him in Memphis, where it resides with him to this day. Linda Gail learned enough basic chords on its replacement to become a songwriter of some note later in life, a talent she does not share with her brother, who famously views himself as a "stylist" and has only written two songs his entire career.

Her mid-Seventies Top 40 country hit, "Smile, Somebody Loves You," won an ASCAP award, but her piano playing remained primarily a songwriting tool as she eased into a musical career influenced equally by the rocking gospel the family heard in Ferriday's Assembly of God church, and singers Brenda Lee, Patsy Cline, and Lavern Baker. Duetting as a teenager with Jerry Lee on one of his later Sun Records releases – "Teenage Letter" B-side "Seasons of My Heart," penned by George Jones – she subsequently hit the road with the Killer at 14, later signing with ABC Paramount. One vinyl 45 issued forth: a stab at "Heartbreak Hotel" composer Mae Axton's "Small Red Diary."

Lewis demurs about her vocals of the time, but YouTube clips of her at 17 belting out Elvis Presley hits "Crying in the Chapel" and "Don't Be Cruel" on mid-Sixties TV showcase Shindig! beg to differ. She eventually landed on the same label that resurrected Jerry Lee's career in the late Sixties by easing him into the country market following the furor over his marriage to third wife Myra. The siblings' Together yielded a 1969 country hit in "Don't Let Me Cross Over" and starred a raucous rendition of Chuck Berry's "Roll Over Beethoven."

"I didn't like my vocal on that so much," fusses Lewis about the former. "I sing it much better now, but it was a country hit for us. I don't know why. It's definitely a rock & roll song."

For all her insecurity over the single, the Lewises' white-hot performance of Berry's anthem on The Midnight Special remains prime YouTube fodder. Linda Gail shimmies in sequins next to Jerry Lee, himself clearly in the grips of some sort of demon chemistry with the piano.

In 1977, Lewis left music for nearly a decade to concentrate on the family she was building with her then-husband. Her brother's country stardom continued unabated, cousin Mickey Gilley rode Urban Cowboy into his own music/nightclub empire, and cousin Jimmy Swaggart built, then destroyed, his tele-gospel credibility in the Eighties. 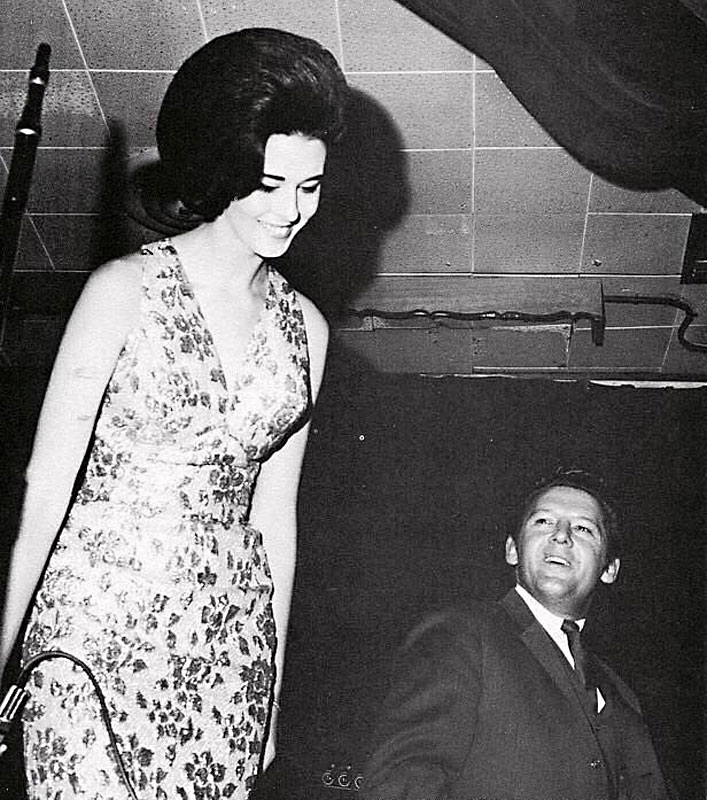 "Three things happened that changed my life," Lewis recalls of her late-Eighties return to performing. "I saw Wanda Jackson play live, my sister-in-law kicked me out of my brother's band, and I started playing piano in my own band. I hadn't seen Wanda live onstage, I'd just heard her records. So we did this gig, and I went out to watch her part of the show.

"This nice, matronly, Christian woman I had gotten to know through the tour walked out on that stage, and she became another person. 'Cause I'd sit with her at breakfast and think, 'What a nice lady.' Then she walked up to that mic and sang, [growling], 'Some people like to rock!'

"I thought, 'Okay, now I get this.' I became a very different singer right there."

Guesting with Memphis firebrand Jim Dickinson at a showcase for noted French punk/roots label New Rose led to a comeback solo disc, International Affair, featuring a definitive take on Nick Lowe's "They Called It Rock" that dazzled critics worldwide. Several indie releases and international tours later, Van Morrison called, looking to realign himself with his roots. After some disastrous sessions with rockabilly legend Carl Perkins and unsuccessful overtures to Jerry Lee Lewis, Morrison thought Linda could be the answer.

"In reality, Van told me he had writer's block," confesses Lewis. "For a few years, he couldn't write anything."

That resulted in the pair's bestselling duet set, 2000's You Win Again.

"I was absolutely horrified," she says, "because he wanted to cut live on the floor. Van's not the easiest person in the world to work with or to sing with. I figured it would be a big flop like the Carl Perkins sessions, so I just said, 'I'm not gonna worry about it. I'm gonna do my best, I'm gonna have a good time, and I'm gonna sit here and do what I can. It'll either work or it won't.'"

The teaming proved arduous. Lewis learned most of Morrison's repertoire for the You Win Again tour, a task so physically demanding she couldn't lift a drink off a table one night. Devout fans hated the album and her presence on the promotion even though she held her own with longtime Morrison accompanist Geraint Wat­kins. Serving notice after a year, Lewis incurred Morrison's legendary wrath. The two haven't spoke since.

Linda Gail Lewis acknowledges she and her cousins live in her brother's shadow. She also admits to being a "party girl" in her 20s and not taking her profession seriously, hence her coasting as her brother's backing vocalist the first half of her career, with the occasional fluke hit.

"I didn't work on them like I worked on Hard Rockin' Woman!" she says. "I went into that studio, and I worked on that like my life depended on it! It's different now."

Cut live in the studio, with Danny Harvey spinning virtuoso guitar and providing prime material like driving set opener "Hard Rockin' Man," plus daughter Annie Marie harmonizing only the way kin can, it's a taut set of vintage rock & roll bearing the sonic family crest. Family's the key when Mama launches into "Whole Lotta Shakin' Goin' On" at the Iron Cactus.

Pounding bass notes with her fist, jackhammering the keyboard and kicking her boot heel atop the keys – her cocky expression hardening familiar features – Linda Gail remains all Lewis.