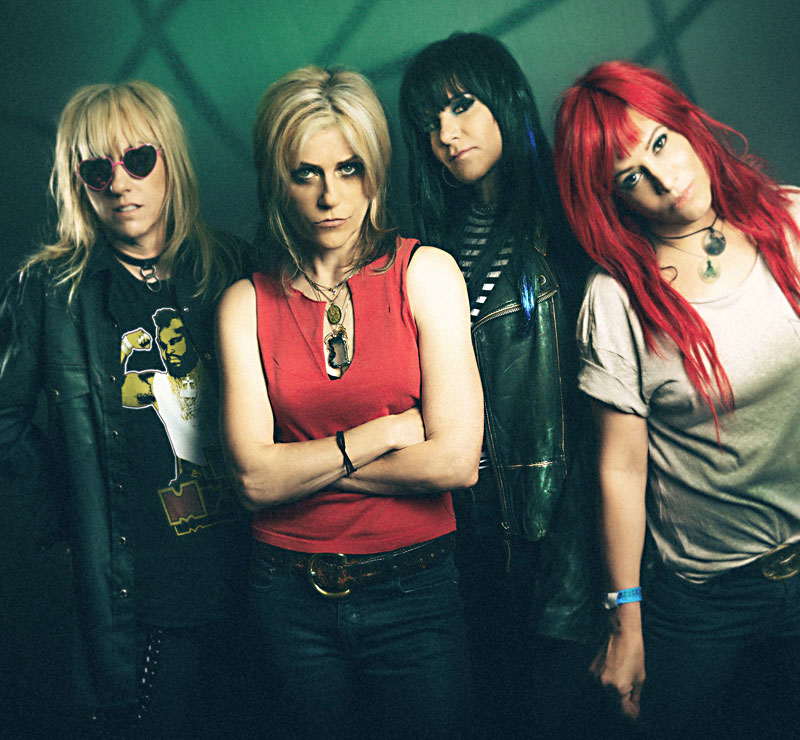 "This reunion was now or never," insists L7 singer Donita Sparks. "Because, I mean, it's not gonna happen in five years. You know?"

"I'd started a Facebook page a couple years ago, just digitizing stuff for my own archives, and the fan response was off the chain," explains the 52-year-old. "I'd thought maybe people had forgotten about us, because other artists more so became the spokespeople of that [Nineties] era. I felt as if we'd been overlooked."

Debuting in 1988, the alt-metal foursome effortlessly upheld the front half of that epoch's riot grrrl movement via ferocious feminist rock. Dropping six albums together, L7 clocked grunge-pop singles including "Pretend We're Dead" and scorn anthem "Shitlist," both from their 1992 Warner Bros. breakthrough, Bricks Are Heavy, and the latter was included on 1994's popular Natural Born Killers soundtrack.

Sparks herself claims the quartet's most notorious and memorable act. In 1992, she removed her tampon onstage and hurled it into Reading Festival's rowdy, mud-slinging audience. Another time, she dropped trou during the band's live performance on British variety show The Word. Although the lengthy lag time between the Lollapalooza 1994 vets' breakup and Sparks' ballsy proposal passed comparatively less outlandish, fans' devotion remained sky-high.

"Nobody approached us and said, 'Hey! You guys could really make some money doing this reunion!'" mimics the Oak Lawn, Ill., native. "I mean, we don't have a manager or a record label. And even though we were all somewhat estranged, we'd still heard that fan buzz buzzing."

Following the foursome's split, Sparks and Plakas reconvened in the former's fugitive solo project, the Stellar Moments, dropping one LP in 2008. Bassist Jennifer Finch, meanwhile, played out with California punk band the Shocker. Guitarist Suzi Gardner, the first woman to have her breasts plaster-cast by Cynthia Plaster Caster, had long since retired her six-string.

"Suzi literally had her guitar under her bed, untouched since 2001," chuckles her bandmate. "So just the fact that she's out there playing at all is, like, fucking amazing. Plus, she's playing so great, with so much fucking tastiness to her leads. And with Dee holding it all down, we sound great. From our very first reunion rehearsal on, Dee's been playing so tight and fucking loud and hard-hitting.

"Honestly, there wasn't a lot of interest from U.S. promoters at first, so we went to Europe," reveals Sparks.

The group has since sold out stateside dates in New York City, Toronto, Brooklyn, and Philadelphia. During L7's Nineties apex, the Rock for Choice founders served savage live sets. "Get out of my way or I'm gonna shove!" Sparks warned each night in Smell the Magic opener "Shove," her raw, raving vocals punchier live than on that 1990 debut. Like Iggy Pop leading the Runaways, the women's punk sludge avalanched both thrilling and perilous in the band's lewd, crude, and randy aural assaults.

"Our recordings were good," compares the Flying-V devotee, "but we were always better live. We were more experiential live, with a lot more dimension. So I really want to make sure we're delivering on that front again. Knock on wood, I think we have been!"

Due to some since-settled "weird shit" stirring their friendships, the singer admits most band members hadn't communicated since their 2001 severance.

"Suzi and I got together solo at first, because she was a little nervous," reveals the bandleader. "Eventually, though, everything just kicked in. Pretty quickly, we were all cracking up together, and it's been getting better and better since – our comfort level together, everything. Nothing heavy or weird's been discussed. We're all just keeping it light."

Having sprouted alongside like-minded femme-punk bands like Bikini Kill, 7 Year Bitch, and Babes in Toyland – the latter Minneapolis act also slated for this weekend's Fun Fun Fun Fest – L7's accustomed to rock's elements of risk and revolution, or, in Sparks' words, "assertion." Her expectation of contemporary bands, as a result, hovers understandably high.

"There are good bands out there," she considers, citing fellow FFF performers the Growlers among her favorites, "but there's a lack of confrontational ones – male or female. It's interesting. Some of these other bands led by women are also reuniting now, and they're all very assertive, but I'm not hearing a lot of political messaging in bands today. It all seems fun and nonthreatening. Sometimes, it's good to have a little 'threat' going on."

Show culture's morphed drastically in the near two decades since the group's last tour. Now, tech-centric fans are often so reliant on documenting gigs' every second that many attendees unwillingly view concerts through others' iPhone screens. That downer truism isn't the case for L7, swears Sparks.

"I have a friend whose band recently did a reunion tour, and he said, 'Oh, it's so different now! Everybody's got their cell phones out and they're not rocking!' And I thought that sucked! But it isn't happening with us," she assures. "Everybody's been participating, rocking out, dancing. It's really cool! I mean, I see photos of us pop up on the Internet, and some videos post on YouTube, but I think people are getting tossed about so much at our shows that they're just, like, taking a quick photo, and then they're right back in the mix.

"Maybe the people who like L7 just aren't that 'type' of person anyway, you know? They're into rocking out instead."

Further evidence of the band's live prowess arrives in their crowds' mélange, the Serial Mom bit-part actors not only maintaining their heyday's seasoned fan base, but pulling new followers as well.

"It's multi-generational," the guitarist observes of the group's recent gigs, which have included three sold-out hometown shows, fest stints in Spain and France, and appearances at this summer's Riot Fests in Chicago and Denver. "We're trying to play all-ages shows whenever possible, because you see your best concerts when you're 16, you know? But we're seeing gray-haired people at our shows, teenagers, gay people, straight people.

"It's been an eclectic mix. And they're all dancing their asses off!"

Ask Sparks what she missed most about being in L7 and she's quick on the sentimental draw.

"Now, I get to experience all that again," she exclaims. "And I'm super stoked." Playback: The Return of the Austin Smoking Ban
A decade after the initial smoking ban, local health group hopes to stomp out smoking patios

The Pleasure Seekers
Patti and the 'Quatro' brand