Flashing back on 10 years of Fun Fun Fun Fest 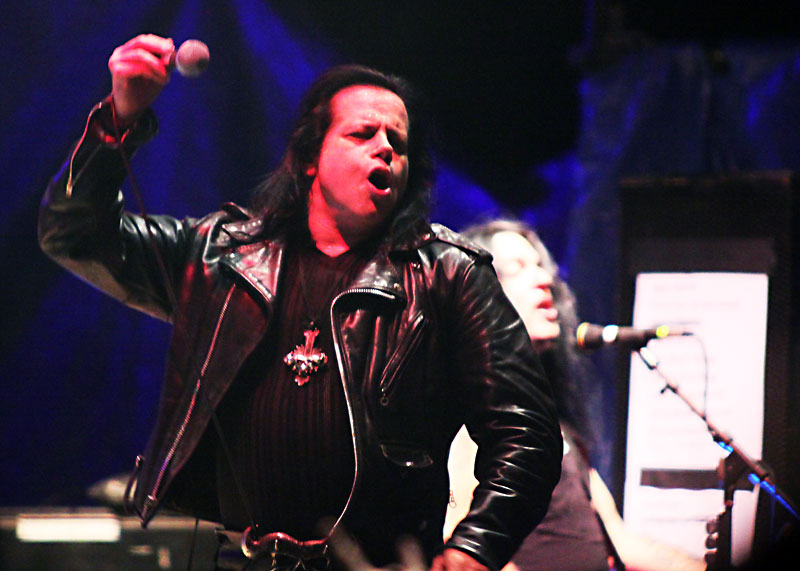 Am I Demon? Danzig, shortly before his meltdown at FFF Fest 2011 (photo by Shelley Hiam)

Ten's a heavy number: the commandments, an amplifier's maximum volume, the total counting power of our hands. Fitting for music, it's a union of two integers independently representing singularity and chaos. Fun Fun Fun Fest regulars Slayer celebrated their big 1-0 in 1991 with double-live LP Decade of Aggression. Saturday's Black stage headliner NOFX occasioned that anniversary with 1994 documentary Ten Years of Fuckin' Up.

Fun Times: "It wasn't supposed to be a festival," admits Moody. "Peaches, Spoon, Circle Jerks, and Dead Meadow all happened to be routing through the same weekend. Graham couldn't get them all at Emo's, so he got together with Tim League from Alamo Drafthouse to throw a big party." A few thousand attendees shell out $20 and endure frigid December temps for the one-day, three-stage event. Williams reportedly stage dives during Negative Approach.

Fun Times: Under the banner of newly founded Transmission Events, FFF expands into two November days and Austin responds with solid attendance. Little-known MGMT are heralded by the Chronicle as a "surprise hit."

Key Locals: This Will Destroy You, Neon Indian, Harlem

Fun Times: As FFF's stages coalesce with color-coding, the park becomes a mud puddle on Sunday, but legendary performances abound: Bankrupt & the Borrowers' musical wake for local singer Jon Pettis, severely injured Ian MacDougall playing with Riverboat Gamblers, and Danzig moaning under black clouds. "A priest in full robes came on the grounds and got in a fight with Danzig's crew that morning because their soundcheck was interrupting church," Moody remembers.

Fun Times: "It became three days because we booked 'Weird Al' [Yankovic] on Friday just to freak people out," Moody reflects. Devo's cancellation instigates the Descendents' first gig in a decade – a punk rock sing-along for the ages. Saturday sells out. "We found ourselves that year," says Moody. "That's when we realized it wasn't about the brand, but the goofy experiences."

Fun Times: FFF's six-six-sixth year evokes evil via Slayer, Odd Future, and Danzig. The latter's prima donna meltdown, truncating a promised Misfits set, provides the now-three-day fest's most notorious moment. The move from Waterloo Park to Auditorium Shores stresses organizers. "We had to rediscover who we were. Waterloo Park was in a dark corner of Red River – basically an extension of Emo's or the Mohawk," says Moody. "Taking those kids into a sensitive neighborhood and screaming 'Angel of Death' through Travis Heights was insane, but what were we supposed to book, Tom Petty?"

Fun Times: FFF channels vintage local gathering Aqua Fest and highlights ensue: Taco Cannon premieres, Refused deliver awe-inspiring anarchism, director Terrence Malick props the Black Lips with a crazed Val Kilmer, and Run-DMC lays down perfection. "Naively, I thought that was going to be the beginning of something crazy or the end of us because it was that big," says Moody, who paid Rev. Run with a suitcase of cash. "It ended up being neither."

Fun Times: Friday's will-call line becomes state-of-emergency with thousands of pissed-off fans stuck outside until organizers open gates for an unforgettable Judas Priest performance. King Diamond burns witches, Nas nails Illmatic, and Modest Mouse summons a meteor. FFF's action sports go pro. "Before, it was a ramp that the skater bros built so they could shred while listening to Bad Religion," assesses Moody. "Volcom took it next level."

Fun Times: "After a decade, we're at a crossroads," Moody reveals. "We love what we do and our fans feel like it's their fest, but the way we book is self-limiting. With Leftover Crack or Venom, you're only booking for a niche number of people and we've reached the limits of that. Now we need to think about where we go next, because we never want to follow the category. We want to innovate.

"What does innovation look like now as the market's shrinking and competition's growing? The only other big fest in town doubled its weekends. ACL isn't our direct competition, but there's overlap now that they've booked younger – after we influenced their comfort to book hip-hop.

"Does innovating mean going smaller and going to different cities? Or does it mean treating the fest completely different? Those are the kind of questions we're asking."

Travis Barker plays FFF with Antemasque. The Blink 182 beatsman joined the band, led by At the Drive-In pillars Cedric Bixler-Zavala and Omar Rodríguez-López, in September and will drum on their upcoming album.

Lauryn Hill subs in for ailing D'Angelo & the Vanguard, not only as Sunday's Orange stage's headliner, but also for his Austin City Limits taping on Saturday.

Dwarves' Blag Dahlia and bassist Nick Oliveri (ex-Kyuss/Queens of the Stone Age) spin records at the Brixton on Saturday night.