Take Me to a Party 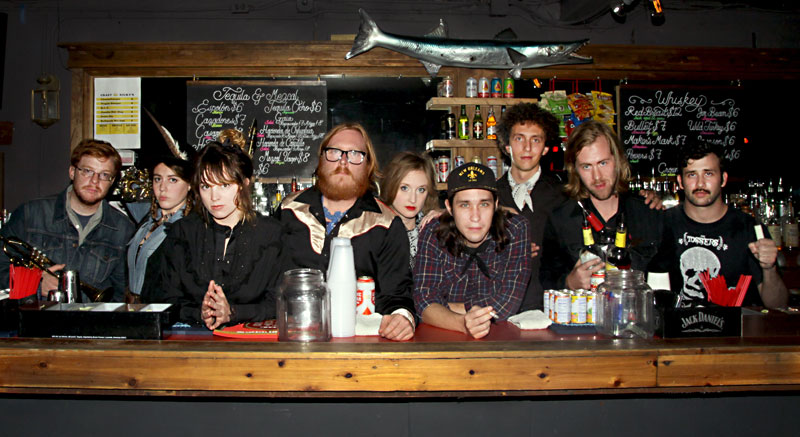 "Sweet Spirit's music is super-arranged and hyper-composed, because so many people's opinions and ideas go into it."

Sabrina Ellis is calling from a farm outside Minerva, Ohio, belonging to Sweet Spirit bassist Jon Fichter's parents. On a tour planned around an appearance at NYC music biz convention CMJ, the Austin ninepiece arrived last night after an all-day drive from Philadelphia. Their next gig's an hour away in Cleveland.

After what Ellis describes as a "farm-fresh dinner" and a good night's sleep, about the closest thing to rock debauchery any Sweet Spirit member has committed here is keyboardist Jake Knight falling out of a canoe on the property's lake. The 29-year-old Houston native, singer for local punk-pop favorites A Giant Dog and ex-frontwoman for the like-minded Bobby Jealousy (revisit "Reckless & Romantic," Feb. 15, 2013), segues excitedly into the 12 sparkling confections comprising Cokomo.

"I love Queen, I love ELO," she enthuses. "I love music that's so arranged that you have moments of huge volume and everybody playing, and then moments where it's just like, 'Oh, this person is just going to sing to some piano.'"

In A Giant Dog, Ellis and her longtime musical partner Andrew Cashen lead a rockist quintet bashing out an energetic, power chord blast reminiscent of vintage Damned. Dressed in leotards and/or microscopic outfits that may get soaked in wine or her own urine, the singer wails, stomps around, and exercises ideas derived from the experimental theatre she undertook in New York in the mid-Aughts. By contrast, Cokomo plays like a vintage Blondie album.

Thanks to shiny, happy, guitar-and-keys-driven outbursts like the opening "Take Me to a Party" or "Chained & Tied," a moody New Wave moment such as "Baby When I Close My Eyes" stands out. And in the spirit of Deborah Harry's pioneering CBGB gang, there's also the girl-group-flavored "Rebel Rebel" (not the David Bowie song). The almost-rockabilly/almost-Motown "Poor" sounds like the Stray Cats with a female singer, full horn section, and synthesizers.

"I've been playing music since I was 14," says Cashen, co-captain of Sweet Spirit, when stirred from a sick bed. "But it's always been loud, fast, rowdy, punk rock-influenced stuff. I've always been a big fan of pop music. I've written commercials, jingles for websites, and these one-off projects that are really poppy. I knew I could write things that were a little more ... crafted. It wasn't until a year-and-a-half ago that I decided I should do that."

Eighteen months ago Ellis put Sweet Spirit together to fulfill Free Week dates booked for Bobby Jealousy. When her marriage to that band's Seth Gibbs dissolved, so did the act, initially. (Gibbs still leads a version of the group.) Ellis and Cashen pooled songs and fulfilled the commitments.

Britt Daniel, who took both A Giant Dog and Sweet Spirit on tour with his indie rock royalty mainstay, Spoon, may have been the last piece of the pop mosaic.

"I'm amazed at the songs that Sabrina and Andrew are coming up with," he enthused from San Francisco the afternoon Spoon was scheduled to play Neil Young's annual Bridge School benefit. "And the speed at which they're coming up with them. And the quality of them. They have this magic formula.

"I was actually with them when they wrote a song once ["Have Mercy," a single released as Sweet Spirit & Britt Daniel]. I got credit on it, but I didn't really do much. Andrew was playing some chords and whistling a melody. Sabrina started writing down things as she was doing all these things like editing photos and sending emails off. Then she holds up a sheet of paper and says, 'I've got it! It's done! It's about birds!'

"It was awesome. I didn't even notice when she had time to write down notes."

"They really hit on something last year," agrees local producer Mike McCarthy, known for ...And You Will Know Us by the Trail of Dead, Spoon, Patty Griffin, the Heartless Bastards, and more, not to mention being the man behind Cokomo and the next A Giant Dog release. "I think they produced something like 40 songs. The songs tell us which direction they're going to go. Some have an early-Sixties Phil Spector vibe, and some have a late-Seventies Blondie kinda New Wave vibe."

For all of Sweet Spirit's pop purity, there's a dark heart to these songs that reflect their singer's circumstances during the compositional and recording processes.

"It's strange for me to talk about the body of work as an outlet for that period of pain," acknowledges Ellis. "The work is perpetual, and the pain changes form so much. Do some of those songs reflect specific struggles of that era of me going through a failed marriage? Yes, they do. When I perform the songs, sometimes they don't.

"Sometimes, I'm going through something totally different, and I need to exorcise in a different way. Not everyone who hears our songs and sings along will be going through a failed marriage, but hopefully the songs will be as significant to them for another reason. A Giant Dog is like a little kid, just an uninhibited part of me.

"Sweet Spirit is closer to who I want to be," concludes Sabrina Ellis, signing off to find her bandmates on the farm.