A Golden Boy gathers his Greatest Hits, there's hope for Hole in the Wall, and F1 Fan Fest contracts, yet expands locally 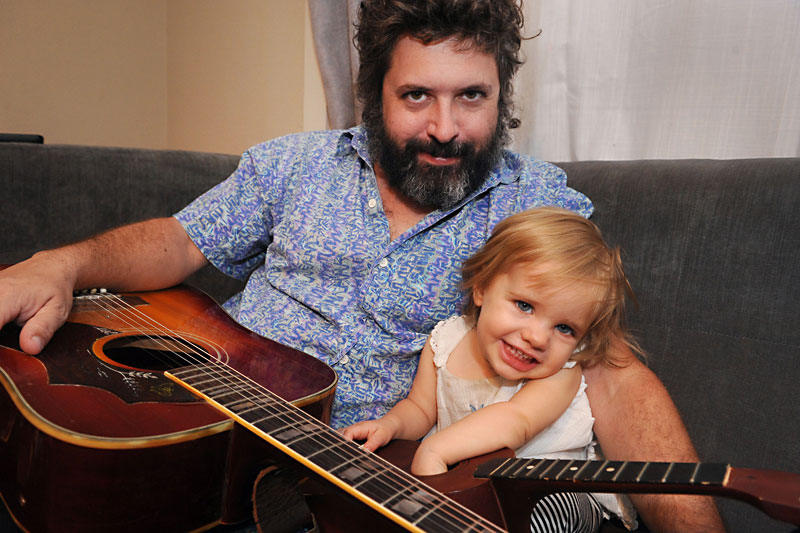 John Wesley Coleman's had a Herculean morning. The hands of the clock have barely hit their northerly crest and the local musician's already dropped his baby off at daycare, delivered cases of kombucha to local shops, and landscaped three lawns. In two hours, he'll head to a studio session as a hired-gun guitarist and then fly to El Paso to record his next solo album at Sonic Ranch.

So much for his slacker mystique.

"I'm hustling a lot more ever since I had the kid," explains the 39-year-old Golden Boys singer-songwriter-guitarist, who welcomed daughter Zoe Clementine into existence last year. "I'm more focused and shit's more real."

On his new album, Greatest Hits, arriving digitally on Friday from Austin's Super Secret Records, dad sings his offspring a lullaby: "I love you more than words/ We party all the time/ In your dreams your voice is heard/ Go to sleep tonight." Coleman wrote it cribside on his first night of solo daddy duty – with Zoe humming along.

"That was when I realized I had this little audience," says the proud father. "Literally. She's made me sharper; I'm writing differently. I want her to say, 'That's my dad,' even if I don't make it."

Coleman's already made it more than most. He's built a national profile via association with tastemaking garage-rock labels Burger and Goner Records, and local respect for songwriting that filters Lou Reed through Daniel Johnston as marinated in Lone Star and chronic. It all began with membership in Austin punk & roll greats the Golden Boys, who've recently begun demoing songs for a new record.

Of course Coleman's never had a successful radio single. That's the joke of Greatest Hits, a collection of all new material.

The new disc represents a stronger overall effort than last year's acclaimed The Love That You Own for being exactly as melodic and sincere, but twice as weird. Coleman's collaboration with Church Shoes frontman Nick Allison on "Television" sounds like mid-Seventies Rolling Stones, and his cover of fellow local Wil Cope's unrecorded "Falling out of Love" arrives as a country-rock gem. "Portlandia," an anniversary present commissioned by strangers for $15, shows the alt-troubadour's knack for heart-shaped lyrics, while "Sorry I Touched Your Mind" trips lysergic.

Greatest Hits tallies as Coleman's 16th album, counting the Golden Boys, and 10th in the last six years. He'll play the Hits at ABGB on Saturday, 9pm, before Löwin and Sweet Spirit. He rejects the implication that being prolific means he can just crap out songs without trying.

"It's a constant practice of writing songs in my head, where I'm always working on lyrics and melodies," he says. "I write while I'm driving. If I'm in jail, I can entertain myself. I'm writing a song while I'm picking up leaves."

Hope for Hole in the Wall

In September, Austin got stung with the news that Hole in the Wall would likely close at the end of the year due to a steep rent increase. Since then, there's been zero updates: no progress on lease negotiations, no news of rich investors, no relocation rumors. Seems that the UT-area music venue, a 41-year-old welcome mat for Austin musicians, had been put on hospice.

Even for a Hole-head like myself, the heavy sentimentality hadn't set in until last Thursday. That night I witnessed Ben Ballinger, a spellbinding local singer-songwriter who's as spiritually bound to the Guadalupe dive as anyone in town, play a nostalgia-spiked set. He promised, "This probably won't be the last time" he played the hallowed front room with a measure of doubt in his voice, then ad-libbing a verse: "This bar's been here for 40 years and I'm not going to be the reason it closes."

Ballinger reminisced about moving to Austin and being escorted directly to the Hole with the instructions, "Everyone you need to know is here." He audibled his last song, uttering "just in case" before launching into Neil Young's "Ambulance Blues" in tribute to longtime HITW manager and Grand Champeen bassist Alex Livingstone.

Ballinger's wistfulness made me feel so mushy that I wanted to kneel down and kiss that dirty plywood stage goodbye, but then I ran into HITW owner Will Tanner, who's sworn off talking to the press, but allowed some good news: He's confident that he and his landlord will soon reach a deal giving the Hole a new lease.

While we hold our breath, show the Hole some love. There'll be some vintage HITW vibes radiating next Wednesday when electric duo Ethan Azarian and Jeff Johnston play.

Hear the engines revving? Smell the gasoline? Formula One racing rolls into Austin this week and with it comes a couple hundred-thousand tourists primed to soak up our city's vaunted music offerings. Accordingly, Austin's concert options get turbocharged with the Moody Theater hosting Snoop Dogg (Friday) and Lionel Richie (Saturday). Circuit of the Americas rolls out its jumbo stage for Sir Elton John on Sunday.

Then there's the ever-evolving free concert series known as Fan Fest, which has undergone a full overhaul this year. It's relocated from the Warehouse District to Rainey Street, folded four outdoor stages into one, and incorporated local music venues into the programming. For organizers, the challenge has been pleasing two disparate audiences: Austinites with dialed-in musical tastes and Ferrari-jacket-wearing tourists.

"Is Fan Fest for Austin to teach them about F1 or about teaching the F1 tourists about Austin?" ponders Sharilyn Mayhugh, managing director for COTA's music events. "That's what we had to ask ourselves."

"What we wanted to do was engage the community who are programming bands already, instead of competing with them," says Mayhugh. "It's a more organic way for the tourists to experience Austin."

Seventh Street Surprise: Jason McNeely tells "Playback" that his new venue at 611 E. Seventh, formerly Red 7, won't open until December, but it will host special events before that. One such occasion is blackened rock trio Midnight who play the unnamed space November 23.

Thousands of Austinites get their last taste of the Austin Music Hall in the coming days as My Morning Jacket fulfills a two-night stand tonight and Friday, and Mastodon, Clutch, and Corrosion of Conformity load in next Wednesday. The warehouse district venue, long damned for subpar acoustics and slow-moving lines, gets the wrecking ball early next year, making way for an office tower. After these upcoming rock shows, just two bookings remain on the calendar: STS9 and Waka Flocka Flame in late November.

13th Floor Elevators visionary Tommy Hall is the subject of a potential documentary titled Slip Inside This House. Friend George Ripley filmed the jug man journeying to the 'Vators' comeback show in May at Levitation and captured extensive interviews with the semireclusive philosopher and his bandmates. The project needs a big push on Kickstarter (12 days left) to get funding.