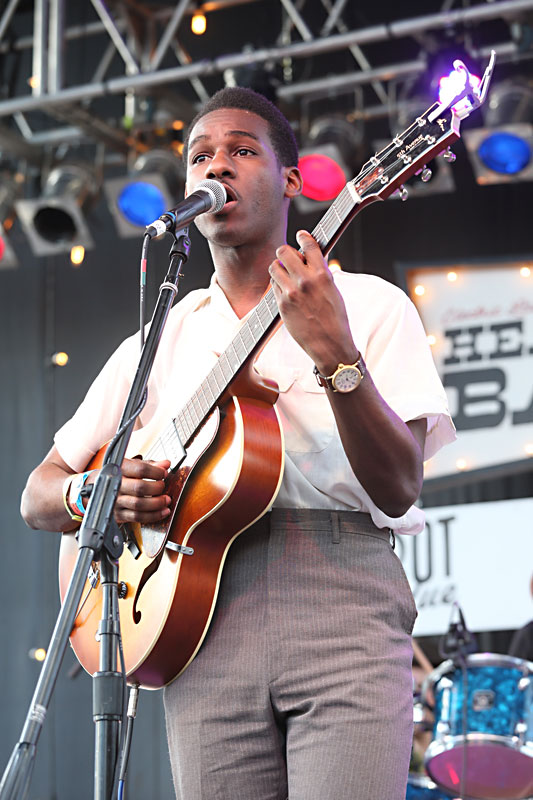 Calendars had barely started on 2015 when the buzz surrounding Leon Bridges became deafening. The last weekend of January, the Ft. Worth-based soul singer and his brand-new band, led by Austin Jenkins and Josh Block – guitarist and drummer respectively for local jam rockers White Denim – performed their first shows. Thursday at the Continental Club in Houston drew more than a few curiosity-seekers, but a two-night run at C-Boy's Heart & Soul on South Congress sold out and then some.

Locally, the combination of the venue's Fifties vibe, Bridges' brand of throwback soul, and his Sixties fashion sense proved exceptional. The comparisons to Sam Cooke held true, but there were other voices of that era underlying Bridges' music: Donny Hathaway, Wynonie Harris, Jackie Wilson. The young singer/songwriter/guitarist's tunes rang true, and the crowd understood they were witnessing something beautiful and rare.

Steve Wertheimer, owner of C-Boy's and both Continental Clubs, had the young soulster on his radar before almost anyone else and harbored zero doubt that his clubs would be an ideal match for Bridges' sound and style.

"Those shows were everything I had hoped for," affirms Wertheimer. "The band was incredible, his backup singers were incredible, and he totally blew everyone away with his voice and songs. I thought it was 1965. Not only is Leon something very special as a talent onstage, but as a person, he's super sweet and cordial and appreciative of what's happening to him. It was just great to see and experience so early on, and I'm delighted to see his star shine so brightly.

At that juncture, the only material Bridges had out was a couple of songs on SoundCloud. "Coming Home" eventually became the title track to his debut LP, and "Lisa Sawyer" might now be considered his signature song, a sweetly composed and demurely sung ode to his mother. When the Chronicle caught up with the dapper 26-year-old for South by Southwest, he seemed untouched by his growing celebrity and clear-headed about what lay ahead. Having just returned from a maiden tour of England, where his appearances sold out in advance, he spoke candidly.

"A couple of months ago I was still at my day job washing dishes," he admitted. "I never thought that my music would grow and people would know about me. I would never have expected all the opportunities that have happened. I wasn't sure if I'd be ready for it, but I'm just learning along the way and doing pretty good so far."

It's said that no less than 40 record labels were in pursuit of his first album. By the time he landed locally for the March madness, he'd signed to Columbia Records, famously home to Billie Holiday, Miles Davis, Johnny Cash, Bob Dylan, Bruce Springsteen, Stevie Ray Vaughan, and a virtual Hall of Fame of others. A label with that much juice made sure he was everywhere during the Festival. Besides his official showcase at St. David's Historic Sanctuary, there were high-profile promotional stops at Spotify House, the Hype Hotel, and KGSR, among others. Afterward, the national press declared him an artist to watch and SXSW awarded Bridges a Grulke Prize for Developing U.S. Act.

Upon its June release, Coming Home received a warm welcome from both media and what's now a worldwide audience, proving the advance buzz not merely hype. It also confirmed the Texan as a cogent songwriter, while the production, striving for a sound from the middle of the last century, featured just enough new millennial sheen to make it contemporary along the lines of R&B polymath Raphael Saadiq. "Twistin' & Groovin'" might be too obvious, but "Smooth Sailin'" possesses a stone soul Motown groove, and the guitar and vocal chorus of closer "River" brings those Sam Cooke comparisons to life in glorious fashion.

If Bridges never seems to break a sweat, that might be his style. His strength comes in putting across emotions and stories with a steady cool. That's something he also affirmed.

"I heard of Sam Cooke when I was a kid," he said. "But I never really listened to him. When I started writing songs about four years ago, I was listening to hip-hop and neo-soul. I had a song about my mom, and it just seemed to fit in that old sound. A friend of mine asked me if Sam Cooke was one of my inspirations, and I felt bad because I had never really listened to him like that.

"So I started to dig deeper, and that's when I found my voice with that style. Donny Hathaway? I think people compare me to things that they know. I'm a little more smooth, not shouty. The revival soul acts are not my style."

The program's executive producer, Terry Lickona, says it's time to expose more of the world to Bridges.

"I first became aware of Leon – along with the rest of the world – at South by Southwest," says Lickona. "I had never even heard of him before, but his talent was unmistakable. Although everybody compares him to Sam Cooke, he has his own twist on modern soul that sets him apart. He seemed like a natural for ACL, but the only question was timing. Should we book him right away, or wait a year?

"Within a few months, as the buzz 'continued to build, it was obvious he was ready – now!"