That drive defines Orville Bateman Neeley III, Austin garage-punk polymath and one of the scene's most gifted songwriters/multi-instrumentalists/recording engineers/producers. His major unit remains the OBN IIIs, which he fronts, vocalizes, and guitars. Their twisted punk take on Thin Lizzy-esque hard rock, Worth a Lot of Money, came out this week on indie magus Gerard Cosloy's local imprint, 12XU Records.

Neeley also plays in the Bad Sports, James Arthur's Manhunt, and technically Blaxxx, whose psych/noise freak-out EP For No Apparent Reason was born of a drunk South by Southwest-timed jam session with OBN IIIs guitarist Tom Triplett, Obnox's Bim Thomas, and a four-track machine. Until last year, he was A Giant Dog's powerhouse drummer.

He's also played with John Wesley Coleman III, the Pumpers, the Best, Bleach Boys, and recorded the Strange Boys, Zoltars, Sweet Talk, and Jonly Bonly, and too many others to list here.

Resembling Jon Voight in Midnight Cowboy, Neeley makes ready presently for a tour after the band's CD release at End of an Ear last week. Stopping by his cramped practice/workspace in an anonymous office park to mix down a song on a multitrack tape machine, he finds James Arthur's Manhunt breaking in a stand-in drummer who'll play Memphis' annual Goner Fest while Neeley's on the road promoting his new album. He settles for telling his life story between sips of Topo Chico and drags on a cigarette at a nearby coffee shop.

"I grew up in a really privileged environment," says the 29-year-old born in Tulsa, Oklahoma. "My parents have also always been pretty supportive of my music. Before I went to college, I'm lucky they let me have band practice at our house and stuff."

Welcome to the Houston suburb of Spring, where the Neeleys relocated when their second of four children, Orville, was 4. Both parents wore white collars while primarily working in the oil and gas industry. Life was good, middle class.

"As a little kid, I could go ride my bike around the woods, make trails, find other people's trails, set fire to the woods – just goofy, dumb stuff," he waves. "I had all this land to explore, and I was probably a lot less likely to get shot by somebody then than now, but that's all developed today. Fill up as much space as you can – cookie-cutter neighborhood next to mansionesque neighborhood."

"My favorite tape was that first Boston album," he says. "Then, by the time I was 6, I was really getting into the Beatles and Queen. I liked the Rolling Stones, too."

Eventually, Kiss, AC/DC, and the Cars joined Green Day in Neeley's budding tape collection, followed by Metallica, Motörhead, and Black Sabbath in eighth grade. That year, he wrote his first song on guitar, while two years' worth of savings from washing cars and mowing lawns bought his first teenage drum kit. ("It had the worst cymbals I had in my life! They broke within the first month I had them!") A ticket to the Warped Tour in 2000 finally tipped him over into punk, even if most of its bands hardly appear in his recent musical diet.

Listen closely as Neeley talks, and a pattern of threes begins to emerge. Foremost among them, until very recently, was employment of three guitarists almost continually since high school and into his college years in Denton. Former OBN IIIs and current Jonly Bonly leader Jason Smith, who dates back to Neeley's first band in junior high, and A Giant Dog's Andy Bauer and Andrew Cashen, who entered the picture freshman year of high school, made up a formidable front line.

Don't forget their bandleader's Brian Jones-like facility with any instrument.

Guitar, bass, and drums. Forced to pick, he's probably most proficient on the latter. Of course he just added a Hammond organ to a track on the latest OBN IIIs disc.

Neeley began breaking all sorts of patterns last year, starting with changing guitarists. He also played his final A Giant Dog gig last summer. Then there's the OBN IIIs, the Stooges-cum-Eighties-Australian punk juggernaut initially formed when he was a soundman at Beerland.

Last year's Third Time to Harm shocked many. It begins on an A-side littered with traditional punk bruisers like "No Time for the Blues," but then the flip side opens with the distinctly Blue Öyster Cult "Beg to Christ" and continues in a similarly KLBJ-friendly vein that caused local garage heads to drop their PBRs in shock. Tracks like "Let the Music" on the new, Mike McCarthy-produced Worth a Lot of Money make you wonder how many Phil Lynott records the bandleader owns.

Neeley excels at garage-punk, but he admits his heart lies with vintage hard rock. That Boston tape looms large. He explains that the band's original direction came from the abilities of its players.

Jason Smith is no guitar slouch, but Tom Triplett has chops to spare, as does the rhythm section of bassist Michael Andrew Goodwin and monster drummer Marley Jones. With this dream team, Neeley now fashions rifferama like "You Can Let Me Down Now," crossbreeding British blues brutes the Groundhogs with Deep Purple.

"I wanted it to be like [the latter's] Fireball," he smiles.

The OBN IIIs still perform with the same wired aggression as before. When the singer unstraps his guitar and crowd surfs the audience, it detonates fuck-shit-up action on a nightly basis. Yet, given new LP opener "Trash Heap," is Orville Bateman Neeley III growing weary of surviving as a DIY artist in increasingly megalopolitan Austin?

"It's no Dallas yet," he muses. "It's not Houston yet. But I've been thinking about that lately, like, 'Where would I go?' I'm heavily rooted here. A lot of my work is based in this town. How can I leave, unless I move to somewhere like Manor? It's only gonna be another 10 years before that'll rise up the same way the Eastside is now."

He snuffs out his cigarette and shrugs. 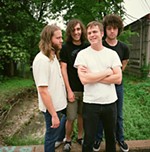