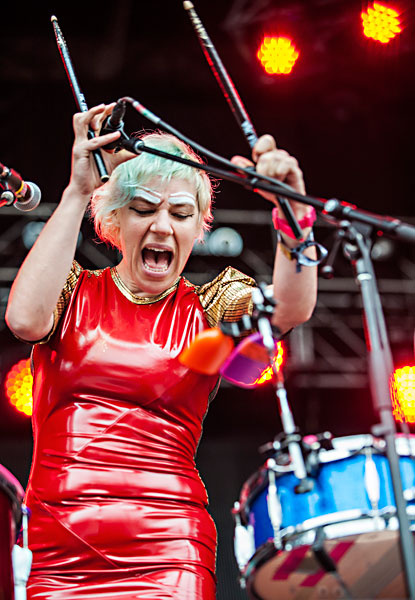 
"The world of Tune-Yards was created with intention," says bandleader Merrill Garbus. "There's a methodology behind our music, down to every last piece of equipment we use."

"We use samples," she concedes, "but we're building from a relatively primitive place. It's all about curation of sound. We're not using laptops and staying exclusively in this digitized place. That philosophy – of not trying to disguise flaws – runs through our music. Even my voice conveys ugliness, somewhat."

"I don't necessarily set my sights on country A, B, or C for influence," says the singer. "Rather, I feel compelled toward ideas as a forever learning student – rhythms, mostly. These ideas of dissonance, of incorrect harmonies, stuttered rhythms ... It's what continually calls me forward as a musician. These 'not quite right' sounds that maybe aren't so apparent to Western ears."

"At first, I was wary that our 'in-your-face' live intimacy wouldn't translate to bigger audiences, but our recent sets have felt so powerful. Ten-thousand-person fests have felt like 400-person rooms."