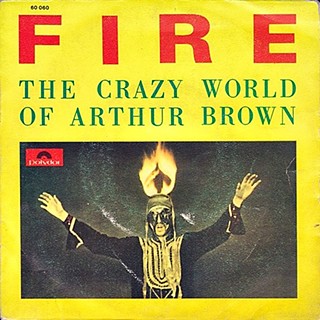 In 1968 England, blokes called Arthur Brown played cricket on Sunday. They didn't proclaim "I am the God of Hellfire" with a burning crown on their head. Pre-Alice Cooper, pre-Marilyn Manson theatrics, plus a massive orchestral psychedelia summoned by Vincent Crane's roaring Hammond organ, set Europe alight and gave producer Pete Townshend his first No. 1 in the UK – much to the chagrin of the rest of the Who. – Richard Whittaker

"The stage," muses Neil Diamond in the gatefold of Hot August Night, "she is the God-damnedest woman you ever saw." Titled for the opening line of "Brother Love's Traveling Salvation Show," this 2-LP set was recorded Aug. 24, 1972, during a 10-night stand at the Greek Theatre in Los Angeles. No accident modern-day ND shows, including an April shower at the Erwin Center, still rely heavily on this double-platinum template. – Greg Beets

"Hot Fun in the Summertime," Sly & the Family Stone

In January, Denton-born Sylvester Stewart, 72, was awarded $5 million in back royalties after a five-year court battle. That includes 1969 psychedelic soul single "Hot Fun in the Summertime," which peaked at No. 2 after the band's performance at Woodstock. Sticky, but sultry like the tropics, the tune and its conceptual cousins "Everybody Is a Star" and "Thank You (Falettinme Be Mice Elf Agin)" all debuted on LP for 1970's Greatest Hits. – William Harries Graham

"The Heat Is On," Glenn Frey

Beverly Hills Cop wasted all box offices in 1984, and its opening salvo, written by music supervisor Harold Faltermeyer – also author of its synth standard "Axel F" – settled for No. 2. Careening through Detroit, Eddie Murphy swinging in the back of a semi, Motor City son and Eagles co-beak Glenn Frey reeds vocally to a sax flare melting the Christmas of Ronald Reagan's re-election year. – Raoul Hernandez