Ever lift a Hammond B-3 organ? Mike Flanigin levitates it. 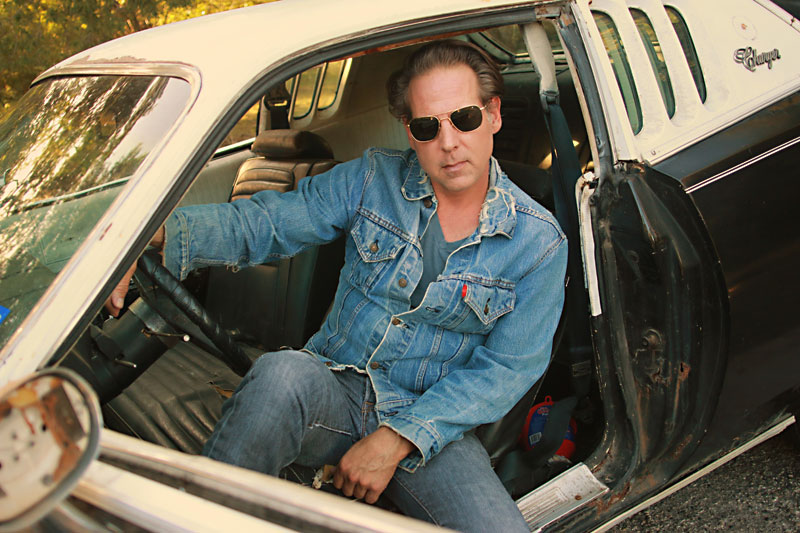 Who's Mike Flanigin? Singer Kat Edmonson, executive producer of Flanigin's The Drifter, is happy to explain.

"Apart from being really good and playing an instrument that's rarely played these days, he's dedicated himself to a style of music that's rarely highlighted anymore. He's charming and soulful, and he has the ability to get people to interrelate in a lovely way."

"Of particular interest with regard to Mike's special approach to playing is a deference toward taste and total style, two difficult elements to snare in contemporary offerings. Yet the 'Flanigin touch' encompasses both, a masterful delivery each and every time that famous Hammond B-3 is fired up.

"And don't leave 'cool' behind. Mike Flanigin chills from the beyond."

"I still can't believe I ever became a musician," marvels Flanigin, 51. "I never aspired to it. I didn't really know it was possible. I just kind of backed into it by accident."

Austinites might know the organist and occasional guitarist from weekend gigs at the Continental Club Gallery, the living-room-sized space above the South Congress landmark, and, more recently, at its sister venue C-Boy's Heart & Soul, the dark, intimate lounge up the street. Besides guesting Antone's house band leader Derek O'Brien, onetime Bob Dylan sideman Denny Freeman, and Barry "Frosty" Smith, among the greatest drummers of his or any generation, lately he performs with no less a guitar great than Jimmie Vaughan as an organ trio.

A lot more people are about to discover Flanigin through The Drifter. A three-ring circus, the solo debut surprises not only with an array of notables – Gibbons, Vaughan, and Edmonson, as well as Gary Clark Jr., Alejandro Escovedo, Blondie drummer Clem Burke, and Reverend Gean West & the Relatives – but also for its breadth of styles. It's decidedly not an organ jazz trio album.

"I wasn't trying to make an album," claims Flanigin. "I wasn't trying to make a name for myself. I wasn't sure if I was going to make it as a musician financially, so I thought I'd like to leave something behind. I'd played so many gigs. I played my whole life and at that point it looked pretty grim. When I realized I had an album, I thought, 'I like these songs. I love all these people and I'm going to try to put it out.'"

Born in Minot, South Dakota, the self-proclaimed Air Force brat and his family moved to California then Louisiana before his parents retired in Denton.

"I was probably 13 when I started playing guitar in Shreveport, Louisiana," he says. "I saw the Smothers Brothers' Tommy Smothers playing guitar on TV and went from there. We moved to Texas, but the people weren't as embracing as people were on the Air Force base, so I sat in my room with a guitar a lot. I never did take it seriously. I did it purely for my own enjoyment."

Flanigin recalls first hearing the organ the way most people were once introduced to it: in a church – where his sister played. Not until much later when he was working in a Denton pawnshop did that sound return to him. Lou Bovis, owner of legendary Dallas nightspot Louann's, would occasionally pawn the club's organ when he was short on cash.

At that juncture, guitar was Flanigin's main instrument. The leading lights of the Dallas blues scene, Anson Funderburgh & the Rockets featuring Sam Myers, were his model. It just so happened that Austin's future Moeller Brothers, Johnny and Jason, were also living in Denton.

"They were like 14," recalls Flanigin. "I sold Johnny his guitar in that pawnshop. It looks so beat-up now, but I remember when it was brand new, the white Fender Strat. He was a kid and I couldn't believe how good he was. We bonded over Anson. We would go to these blues jams in Dallas.

"Then Johnny got in a band. When he got a gig playing with Hook Herrera in California, he asked me if I wanted to to replace him. I was 24 and I had never been in a band."

The first gig was at the Holiday Inn in Lancaster, a suburb of Dallas. Playing three sets a night was a stretch from playing three songs at a blues jam.

"My hands were bleeding and I thought they were going to fall off," says Flanigin. "But around that time, 1990, there were a million gigs in Dallas and they all paid $250, split four ways. All of a sudden, I'm a musician. Nobody is more surprised than I am."

He eventually made it to Austin at the invite of Clifford Antone. Antone's club, then on Guadalupe, had a Hammond B-3 organ onstage. Due to his love for Houston bluesman Hop Wilson, Flanigin was now playing double-neck steel guitar. Trying to re-create the sound made by organist John Patton on "Let It Roll," he fed his guitar through a flanger to make it sound like a Leslie, an amplifier used with organs.

"One day I looked at that organ," he relates, "and I thought, 'Why am I playing this organ song on a steel guitar when there's an organ right here and nobody's playing it?' I had no organ or keyboard experience, but I'd sit in with bands onstage and try and figure it out. I remember Derek yelling at me for fooling around.

"I really didn't know what I was doing."

After a few months of learning on the job, he was hired to play organ in a band led by Doyle Bramhall Sr. Flanigin didn't even own an organ. Scrambling, he found an ad in the paper. A church lady was selling her organ for the relatively cheap price of $700. When he phoned her, she told him the first person at her house with the money got it. He got there seconds before someone else, who offered her double the asking price, but she stuck to her word and the organ was Flanigin's.

"That was one of those moments – 1993 – that makes you think about life. If that organ had not been in the paper and had she given it to the other guy for twice as much, I may not play the organ. That was a big thing. It was fun playing the organ back then, because nobody expected me to be good. It was so freeing. Once I got that organ, that's all I would do all day, and I didn't have anything else to do. That's how you get good." 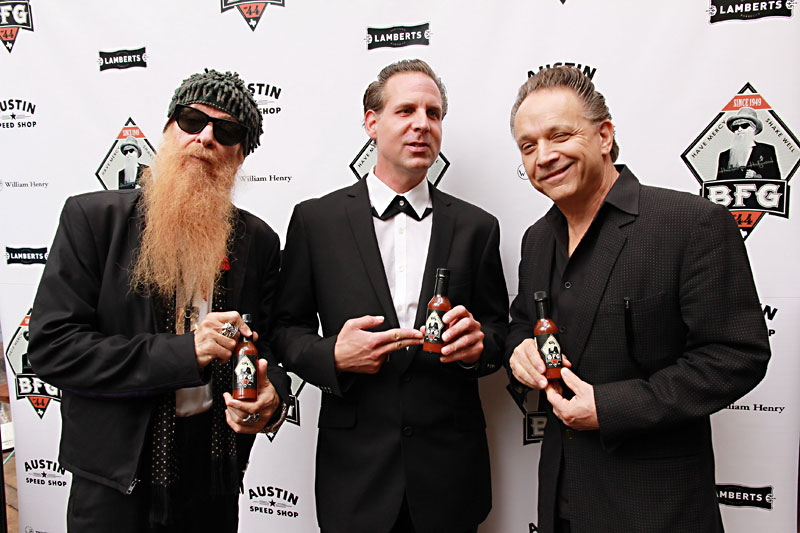 Eventually, he journeyed to New Jersey in search of John Patton, and lived with the organ master off and on for a time, absorbing all the knowledge he could. Upon returning to Austin, gigs were hard to find, except for an occasional booking at the Poodle Dog Lounge on North Lamar. No one was actively playing the organ in a trio style at the time.

Steve Wertheimer would book him for some fill-in happy hour gigs at the Continental, but attendance was sparse. Around South by Southwest 2007, Flanigin and his B-3 trio took over the space that's now the Continental Club Gallery on weekends. Initially a tough, under-attended gig, things turned around when Frosty joined the trio.

"Frosty made it easier to get players like Derek and Denny," he relates. "He grew up on organ trio music living in California. Not to mention his work with Lee Michaels, and those guys were a duo! He knew how to play the music. I learned more from Frosty than any other musician. If it wasn't for him, I wouldn't be playing today.

"I was just trying to learn, and when I was having a hard time with a crowd, I'd just give it to Frosty and he'd just draw everybody in again. He's just a great listener. He was the guy who taught me to listen to other musicians. We'd play the same songs, but they were different every night."

Which brings us to The Drifter.

It began with a divorce, although Flanigin stresses it's "not a divorce record." He was living in a one-room garage apartment with none of his belongings. He bought an 8-track tape player and some tapes that came with it. One was Jim Croce's You Don't Mess Around With Jim from 1972, a favorite from his childhood.

"When I listened to Jim Croce on 8-track, I realized he was just writing about his life. All this stuff was happening in my life. I didn't fancy myself a songwriter by any means. I would just write a song for somebody in my mind. I wouldn't write it for me.

"I wasn't making an album. I was just recording these songs about what was going on in my life."

The album starts in a jazz mood, with a horn-spiced fusion dubbed "The Devil Beats His Wife." Then it takes a hair-raising turn into "Fit to Be Tied," a slab of punk rock performed by Escovedo on guitar and vocals, Dominique Davalos of the Bluebonnets on bass, and Blondie drummer Burke whacking the skins. The latter had a two-hour recording window before a local gig.

"That song is one take," recalls Davalos. "We went for it, and boom, there it was. We wanted to try a different tempo or something, and Flanigin was like, 'No, that's it.' It really was exciting."

The rest of the album comes with similar stories. Clark recorded his Curtis Mayfield-inspired "Stop the World" the same day he appeared at the Austin City Limits Music Festival. In the studio, Flanigin asked the Rev. Gean West of Dallas gospel outfit the Relatives to talk about trying to make your way home. West spoke off-the-cuff, which then became "Tryin' to Make My Way Back Home."

Jimmie Vaughan has appeared on some of the biggest stages in the world. Still, if it's Friday or Saturday night and he's in Austin, you can find him with Flanigin on the cramped stage at C-Boy's.

"It doesn't matter how big the stage is," admits Vaughan. "Mike likes the same kind of music I like, whether it's blues or R&B or jazz organ stuff. When I was a kid, I listened to a lot of Jimmy Smith, Jack McDuff, and Jimmy McGriff. It's a dream come true for me to play that type of music."

Mike Flanigin celebrates The Drifter at the Paramount Theatre on Sunday, Sept. 6, with Kat Edmonson, Billy Gibbons, the Relatives, and more special guests. 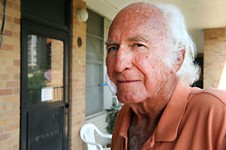