Are Red 7 and Red Eyed Fly merging? That and whatever happened to the Strange Boys answered in this week's music news.

Reports of encroaching development, rent hikes, and club closures have been so contextually blunted in recent media reports – looking at you, Pitchfork – that if Austin music fans didn't know better, they'd think it was time to pull the plug on Red River's renowned venue culture. Pipe down, voice of doom! New revelations suggest the district still has life, new prospects, and willing investors.

"Playback" has learned that Red 7's ownership group is working to partner with the owners of Red Eyed Fly to open a new venue in the latter's building at 715 Red River. Since Red 7 is currently booked by Fun Fun Fun Fest promoters Transmission Events, it stands to reason the new club would also be a TE-booked enterprise. Imagine that, Red Eyed Fly, whose past booking strategy could be likened to scraping the bottom of Austin's musical barrel, could have its stages filled by cunning talent buyers.

Red 7's future remains unsettled. The club faces a sizable rent increase at its current location (611 E. Seventh), and they've yet to re-sign their lease, which expires Oct. 1. If the venue shutters, owners would have two stages – one tiny interior and a large, enclosed exterior riser – to relocate their calendar.

Red Eyed Fly, which opened in 1999, played Red River's redheaded stepchild in recent years, but that stood to change when Elysium/Valhalla owner John Wickham took over the lease this spring. Wickham, who's held ground on Red River since 2001, has long been an unheralded linchpin in the district, and now he's integral to connecting this venture.

Despite Red 7's sister venue Holy Mountain having announced its closure last month, a move such as this would help ensure the future of Red River's soundtrack. If constituents are resourceful and work together, live, original music might just survive urban development Downtown.

Last time we checked in with Ryan Sambol, the moaning, owl-eyed frontman of onetime Texas garage breakouts Strange Boys, he was Living Grateful-ly. That was July 2013, and the local songwriter was high on his new quintet, which exchanged the Strange Boys' nitrous jangle for bluesy rock poetry. The feeling was fleeting: Living Grateful formed, played four shows, recorded an album, and broke up in a four-month span.

"The record was so personal, I didn't want it to come out. I was going through a very strange time," Sambol offered in a January interview. He considers the band a bright spot that preceded a dark period. "I didn't write a single song for a whole year. I didn't even pick up the guitar for six or seven months, and I sure as hell didn't play the piano. I didn't even carry around a notebook, which I've been doing since I was 15.

"If you're sitting in your room trying to sleep 22 hours a day, it'll be hard to write a song."

Sambol's unconcerned that he walked away from burgeoning success when the Strange Boys silently split in 2012. They'd had their triumphs: indie record deals, overseas followings, opening slots for Jay Reatard, Ty Segall, Julian Casablancas, and Spoon. 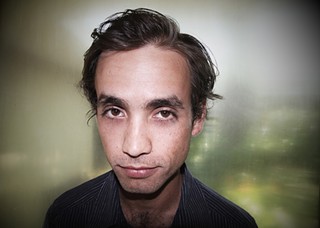 "I didn't have what it takes," Sambol reckons. "I'm proud of some of it. Some of it seems very lazy and some of it is magical in a way."

During Living Grateful's short tenure, Sambol realized he couldn't express himself while dealing with the responsibilities of leading a band. In December, he quietly began performing as a solo artist. It was the first time in his musical career, extending back to 2001, that he billed performances under his own name.

"It's unavoidable," he reasons. "You come into this world very much relying on other people. I think there are some people who can go solo very early. It took me 28 years. As a person, not as a musician, I couldn't have done it any other way."

Witnesses to Sambol's 2015 performances glimpse a man finding himself as a solo artist – sometimes alone, other times accompanied – working out original country songs, piano ballads, and reinterpreting traditionals like "Will the Circle Be Unbroken."

"The songs I'm playing now are able to be done with 10 people or one person. I'm also doing a lot of covers. If you're going to be a musician, you should be able to have something people know if they say, 'Play me a song.' For a long time I couldn't do that," laments Sambol.

The best of this triptych is Living Grateful's LP Peace Mob, which reunites Sambol with gifted guitarist Greg Enlow for a beautiful platter of vintage rock with lazy tongue prose. All tuneage emancipates on Friday when Sambol performs at Studium (908 E. Fifth #106) alongside sidemen Chris Catalena and Evan Joyce at 10pm. For Sambol, now begins his third act.

"It's all a natural progression. In Strange Boys, we were strange boys. Then I started to Live Gratefully – I thought I did, but I didn't. In the end, what's left in someone's life but their name and who they are? That's where I am right now."

Arcattack puts new meaning to "shock rock." Austin's musical mad scientists discharge lightning via giant Tesla coils along to music backed by a robot drummer. The Long Center bravely hosts a performance Friday night where audience members will be invited to dance inside a Faraday cage that's being blasted with electrical voltage. 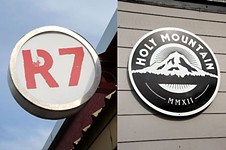 Playback: Holy Mountain and Red 7 in Danger of Losing Leases
Could the Red River Cultural District be losing two of its landmark live music venues? 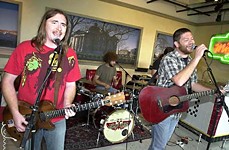