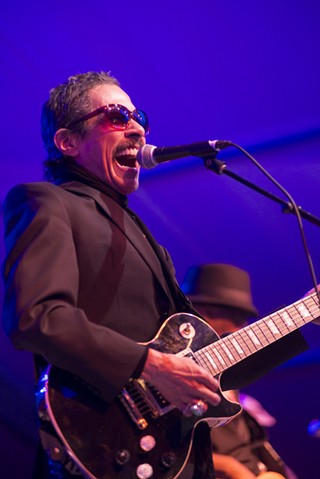 That's the shorthand most commonly thrust upon L.A.'s Shuggie Otis, who released three kaleidoscope albums of blues, funk, and psychedelic soul in the early Seventies – each more layered, experimental, and acclaimed than the last – all before his 22nd birthday. For nearly 40 years afterward, he didn't release a single piece of new music and was rarely heard from at all. He insists he wasn't hiding.

"I was born into it," says Otis of the music business. "It feels very comfortable to me. It's like being home. Despite any rumors that I shied away from it, I didn't. I just couldn't get a record deal."

"My first experience being around musicians happened at my own house with my father's band," recalls Shuggie, born Johnny Alexander Veliotes Jr. "I was probably about 3 or 4 years old and they would rehearse every weekend. They'd play R&B, rock & roll, and blues. Rock & roll had just come out then. They were some of the first ones to do it.

"That was a big influence, seeing Jimmy Nolen on the guitar. I saw Johnny 'Guitar' Watson play in our front room."

At 11, he traded guitar licks with the band onstage, and pocketed cash as a session player for Frank Zappa at 15. A year later, his major-label debut let it be known: Here Comes Shuggie Otis. Blues defined the 1970 debut, "Shuggie's Boogie" name-checking B.B. King, Son House, and T-Bone Walker, but even then the sound defied genre conventions.

"Jimmy Page is probably one of the better blues guitar players, and Keith Richards is one of my favorite blues guitarists out of Britain," says Otis. "I like Jeff Beck too, Eric Clapton. You can't deny them. They're wonderful.

"At the same time, I listened to Buddy Guy and he was playing like that in the Fifties! I went to see Buddy Guy one night and said, 'Wow, this is the guy that invented psychedelic blues guitar.' Jimi Hendrix used to ditch his concerts to see Buddy Guy – tape him, copy his licks. Jimi would then add his own stuff. He wasn't just a copycat. He was genius. But Buddy Guy is very underrated and Otis Rush is very underrated. He's one of the greatest.

"Hubert Sumlin is one of my favorite guitar players. At home after school, I'd go from the rock & roll station to the soul station to the classical station, and I'd say to myself, 'Which one do you like the best?' I could never answer that. Why do you have to like one over the others? I love it all."

"I loved my version and I always will, but I also loved the Brothers Johnson version," affirms the song's author. "When I first heard it, it blew my mind. I was elated when I heard about them doing it."

A dreamy wonderland of psychedelic soul and paisley funk, 1974's Inspiration Infor­ma­tion took the better part of three years to complete. A sonic masterpiece, it sounds every bit the missing link between Hendrix and Prince. Otis took creative control of the project, writing, arranging, and producing every track and playing nearly every instrument. It's intricate yet airy. Layers of strings, synths, harps, horns, flutes, and vibraphones weave together a perfect top-down Southern California sun/haze moment. The hypnotic tick-tock of the Maestro Rhythm King drum machine keeps Inspiration forever fresh.

"I was recording at Columbia studios one day," remembers Otis. "They had four studios down there and Sly Stone happened to be there at the same time. I heard he was using a drum machine and I could hear it. It was a strange sound, because he was mixing a drum machine with a drum. It was really a different sound, so I went and bought one. I realized it's just a metronome with all these different beats and you could just jam with it for hours. I would come up with songs jamming on it. I just experimented and had fun with the ideas I was coming up with."

The world wouldn't hear from Otis again until the album was reissued by David Byrne's Luaka Bop label in 2001, cementing its place as a cult classic and its creator as one of pop music's great mysteries.

"During that time I was very introspective and very reclusive," says Otis of the three-decade gap in his career. "I shied away from wanting to be the guitar star because people were expecting that of me. I was more interested in composing for orchestras and experimenting with different ideas I had, some of which came out on Inspiration Information. That's where I was headed. To find a new style, a new direction."

Other opportunities arose. In late 1974, he got a call from his friend Billy Preston. Mick Taylor had just left the Rolling Stones and the band tapped Shuggie. He turned them down. Then Quincy Jones got in touch. He wanted to produce the follow-up to Inspiration Information. Again, he prefered to do his own thing.

"I have no regrets," he maintains. "I'm not bitter about the past or not having a record deal. My life was happy, so I didn't have a problem with it. I was laid-back. I was happily married and raising my child, and everything was different then.

"I still loved music and always felt like I would come back and be in the music world and onstage again. I enjoyed other people's music and was still writing all the time – making notes, writing songs, writing ideas, recording them.

"Some made it onto the Wings of Love album."

Released in 2013, Wings of Love paired yet another reissue of Inspiration Infor­ma­tion with an album's worth of unreleased material stretching from 1975 to 2000. An intriguing if uneven listen, it partly answered the question music geeks asked for decades: What the hell has Shuggie Otis been up to all these years? The release coincided with a series of comeback shows, including a stop at the Austin City Limits Music Festival that year, although his performance the second weekend was canceled when the final Sunday was rained out.

"I knew it was going to be a struggle, but I didn't know it was going to be such a struggle," he says. "I got through it, but I had a lot of improvement to make with my guitar playing and my vocals. My whole concept had to change. When I finally did and I got my health together – I got straight and wasn't doing any kind of substances anymore – I fell in love with life again too. I have a clarity that I didn't have before and an appreciation for the talent I was given."

Otis swears his guitar chops have never been better and he gets giddy talking about a forthcoming album of new material on Cleopatra Records.

"I feel a spiritual connection for doing this music where, when I was younger, I would deny sharing any sort of personal experience that would be emotional at all. I was too insecure. I had a lot of hang-ups. I think I'm on a better path now, and every day you learn something new.

"I don't have it all together. No one ever has it together all the way!" 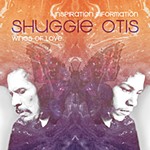