Willie Nelson Fourth of July Picnic lands back in Austin 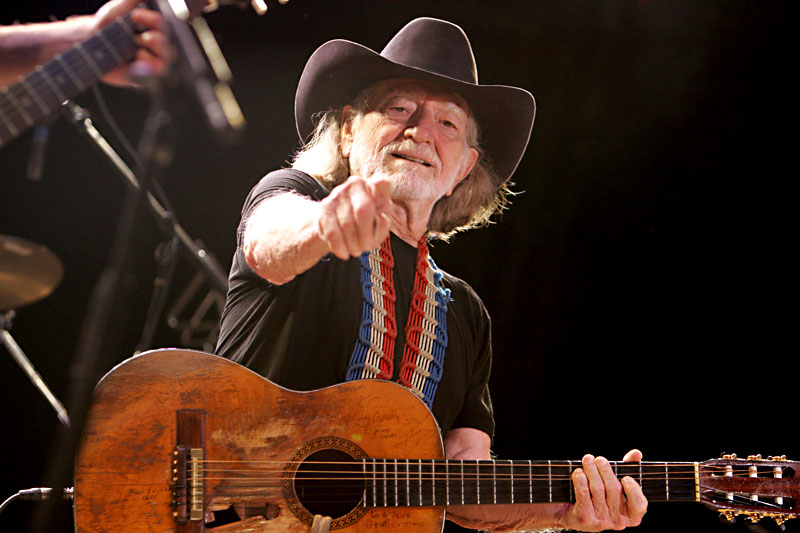 Willie Nelson, seen here at the Backyard Picnic in 2010, wants you at his Picnic. (Photo by Gary Miller)

On Saturday, Willie Nelson's Fourth of July Picnic returns to Austin for the first time in five years with the strongest lineup in double that time. Like its 82-year-old host, the enduring Independence Day concert may have its wildest years behind it, but it's managed to remain relevant beyond any reasonable expectations.

"It's like an ol' family reunion," says Billy Joe Shaver, who's missing more fingers than he's missed picnics. "They're all pretty much like kinfolks. If they ain't there, we say, 'Ah well, he must be dead.'"

"I played that. It was pretty strange, too. I got bit by a brown recluse spider and I thought I was Jesus Christ, so I started baptizing people in a mud pit. Finally somebody convinced me I wasn't, so I quit healing people. I had a great time though," laughs Shaver. "It seemed like there were more entertainers there than there was people."

Willie, who retreated to Austin from Nashville in 1972, launched the Picnic the following summer in Dripping Springs, unwittingly creating outlaw country's Woodstock equivalent and spurring a Texas tradition. Early Picnics drew a notoriously eclectic (naked and on drugs) audience and often made headlines with bizarre incidents. The 1974 outing in College Station had the famous parking lot fire that torched 12 cars – one of them belonging to a young Robert Earl Keen. Two years later, the Picnic drew 80,000 unruly fans to Gonzales. Local news reported 147 arrests and one drowning death.

"It was a raucous affair. They tore down the fence and nobody paid to get in," remembers Asleep at the Wheel's Ray Benson, a Picnic fixture since year two. "But they got to see George Jones because of Willie."

The Picnic's been a casual obligation to Nelson for over 42 years. A dozen Julys have come and gone with no festival. When it does happen, the event's malleable: sometimes big, sometimes small, sometimes a weekend long, sometimes a single day. He's utilized property far and wide, holding picnics at Southpark Meadows, Carl's Corner, Luckenbach, and the Backyard at Bee Cave, where it made its last Central Texas appearance in 2010.

"Willie called it a picnic because it was a gathering of musicians," says Tim O'Connor, who booked many of Nelson's midsummer outings. "It was a way to celebrate the Fourth of July and the freedom to do what we wanted to do. You have to respect what Willie's done. He's a generous and genuine man. He never one time thought about the money."

If Willie's Independence Day parties feel like a hazy memory to Austinites, it's because the Picnic has existed in the Ft. Worth Stockyards for the past four years. During that time, it's seen inconsistent attendance and occasionally hosted watered-down country à la Dierks Bentley.

"I really didn't like the Ft. Worth thing. It was a big ol' piece of pavement, just a big parking lot," says Benson. "I liked being there because I got see everybody, but the physical location wasn't half as nice as it'll be out at the racetrack."

Music's the real draw at the 2015 picnic. While Willie still personally invites his friends to play, he's not the one emailing Kacey Musgrave's manager to negotiate performance contracts. The heavy lifting's been taken on by C3/Live Nation, who exclusively book the COTA amphitheatre. Nonetheless, Benson sees the lineup's younger bloodline as a modern representation of what was happening at the onset of the progressive country and outlaw movement.

"It's really the antithesis of the of the Top 40 bro-country bullshit," he says. "I think it was the same going on back then. We were all going, 'Yeah, we'd love to be on the radio, but we're not going to do it your way. If you want to play us, do it.' That's happening now with a different radio landscape. I think Jason Isbell, Sturgill Simpson, and Kacey Musgraves are the new example of that.

"I call them sons of Willie Nelson." "I'm too old for this genre. Dance music is Bieber music now," sighs 32-year-old local producer Bird Peterson. "To be rich off it is a young man's game, so I'm just going to do what I want, which is make my sad, goofy shit."

Peterson's done exactly that to glorious ends with his new LP, Plume, going public July 7 on Teenage Riot Records, a label he operates with Jesse F. Keeler of MSTRKRFT/Death From Above 1979. "If Air and Three 6 Mafia covered Queen's 'I'm in Love With My Car,' that's how I feel this is. It's big, it's grandiose, but it's really rap and really chill."

Plume's 13 mostly instrumental tracks emanate with liquid artistry, building with sinuous countermelodies over rap-worthy beats and drops aimed not at the molly-licking bass crowd, but appreciators of composition. The album's infrequent guest spots, including a nursery rhyme fuck-you track from Austin's Space Camp Death Squad and synthy vocal pop from Keeper, highlight, but the centerpiece is a mercurial dissertation on ecstasy use from Minneapolis rapper Astronautalis called "Sugarface."

"It was a back and forth until it was a perfect song," says Peterson. "That guy's an incredible artist. You give him anything and he'll make it better, so I had to match wits."

For Peterson, Plume serves as a farewell to "trap," an EDM subgenre colliding trance and hip-hop, whose popularity he foreshadowed in 2010 with tracks on Diplo's Mad Decent label under the alias "Drankenstein" – two years before the same label released trap's magnum opus, "Harlem Shake" by Baauer. He's seen trap become a lunkheaded blueprint lacking melody that predictably resolves into a singular bass noise.

"Fuck the formula," he spits.

Titus Andronicus' 2-CD rock opera The Most Lamentable Tragedy, out July 28 on Merge Records, features a cover of Daniel Johnston's curious classic "I Had Lost My Mind." The pop savant himself plays Mohawk on August 22.

Cheer Up Charlies defenders, as well as a sit-down with developers and Council Member Kathie Tovo, couldn't halt construction on the venue's patio. As of Tuesday afternoon, scaffolding and fencing have gone up, two large trees have been removed, and some of the club's prized rock wall has been chiseled to accommodate the Hyatt's nearby parking garage.

Transmission Events and city staff have yet to reach agreement on the site plan for November's Fun Fun Fun Fest at Auditorium Shores. The Parks Department won't permit FFF to use the off-leash dog area of the grounds, decreasing the fest's total space by 20% and complicating stage placement. Prior to Auditorium Shores' redesign, City Council instructed city staff and FFF stakeholders to work together to ensure the vitality of the event. If they can't agree on what that means, the issue may go back to Council.